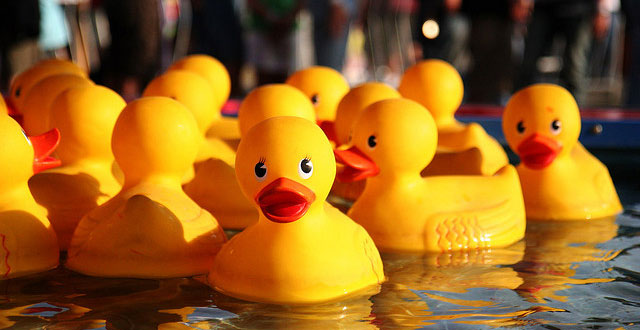 Stand in the middle of the Los Angeles Convention Center’s South Hall. Look left. Lara Croft, younger, of uncertain ethnicity and 40 feet tall, yells up in agony, her skin bloodied and sweaty. Look up. A teaser reel of successive kills, backs broken, heads stomped in, bodies impaled. Look down. An on-screen tutorial offers the following advice: Hold [LB] to Eat Heart. Look right. A giant eyeball twitches in its socket; a jump cut to a silhouette of a man holding unidentifiable tools; a cut to another man, gagged and tied down on a gurney. More eyeball. More silhouetted tools. More gurney. The eye is now held open with tiny prongs, Ludovico-style. The point of a blade creeps closer, closer, its edge reflected in the dilated pupil until—quick zoom-out to his face. The guy’s okay. He looks around, relieved. Cracks a smile. Then two zombified hands cover his mouth to a swell of discordant echo.

Now look straight ahead. An Olympic stadium beckons you with familiar mascots, triumphant horns bellowing. The bold colors are invitingly opaque. You enter and play a game of virtual badminton with a stranger. You lose 5-3, blaming the crappy controls, but who cares? In here you feel safe.

Kinect Disneyland Adventures is on display in a see-through hyperbaric chamber. On screen, a small girl with pigtails and striped long socks charges into Mickey Mouse for a hug. In the chamber, a tall man in a green shirt is waving his hands up and down. The girl rushes into Mickey again, and he shakes his head, adding unknown commentary. A message flashes again: “Try a high five!” He brings his hands up again, then down again; her ponytails fling out as she accosts the Mouse once more. When she finally releases her grip, Mickey waves and stumbles away. Upon meeting the next mascot, the screen flashes new instructions. “Try a hug!” The man looks at the ceiling, face pulled taut in a grimace, mouthing words inaudible behind the glass.

Jesus strolls outside a booth for GameChurch.com. Someone stops me, asks if I can take his picture with … he turns to the robed one. “Do you take pictures?” The question is serious, a hushed tone in deference to someone, or thing, larger than all of us. Of course Jesus takes pictures. I snap a vertical portrait with his iPhone but the lighting is poor, the resolution grainy. It’s not a photo befitting our Lord and Savior, but it will have to do.

When I ask another attendant what the basic gist of GameChurch is, he says, “This is all just an excuse to tell you that Jesus loves you.” He hands me a small book called Jesus, For The Win!. An introductory chapter opens with the line, “Let’s say the Bible is a 500GB hard drive.” They even have a web show, a live episode of which is filming behind the merch table. The male and female hosts are looking down at the floor; I follow their gaze and, six feet below the boom mic, a lanky Britain has pretzel-tied himself, a short buzzed haircut sticking out between linked calves. The attendant hands me something—“Come back tomorrow for free beer,” he says—when they promise to answer the question on the given card: What Would Jesus Brew?

Much of E3 runs on a forced bravado, each booth requiring more amps and lights and volume to overpower their neighbors. To walk the showfloor is an exercise in sound management; the barrage is near-endless, a constant loop of Doppler effects and thrumming reverb. But in the northeast corner, a quieter division of booths nestle together, their firepower necessarily silenced. One such company is Comfy, maker of “Smart Games for Smart Kids.” Its newest product is the iCam. It combines a webcam with “specially designed magic wands” to create the simplified spawn of a Wii and Sony’s EyeToy. In one game, a number flashes on the screen while clowns, holding signs with different equations, pop out of holes in the ground. A floating mallet moves in sync with your wand; bop the one with the correct answer and score a point. Think Whack-A-Mole meets Number Munchers. (Comfy is into high-concept idea-cribbing.)

A sales associate comes over and puts the wands in my hand. The weight feels nice, the rubber yielding for a nice squishy grip. But the bundle also includes a magic steering wheel, used in a game meant to help teach your young one how to drive safely. While bopping clowns I ask a few questions to make it appear this is a worthwhile exchange, that our time is best served focusing on this exact arrangement. “So I see it comes with not only wands but…”

“You can look at the box,” he says, before stating the contents so clearly listed elsewhere. I’m thrown, talking to the one salesman at the Expo not enthusiastically reeling off data and features; essentially, the one salesman not selling. The negative reinforcement works. I’m more curious than ever.

“Since your audience is so young,” I begin, hesitating, “why is there a game that teaches, um, driving?”

“So they can learn rules of safety,” he says. “When to cross the road, how to turn on their blinkers…” He fades out. The ellipsis tells me, That is all I have for you. I bop another clown on the head: 1+4 does, in fact, equal 5. “You’re doing a good job, my friend,” the salesman says, patting me on the shoulder and returning to his chair, leaving me to whack the air.

G4 is filming live televised segments of its popular series, “Attack of the Show.” Groups of attendees gather in pre-defined sections of the floor, to fill the background of certain shots. A man in a headset standing behind the camera raises his arms and the crowd claps and cheers. Somewhere, somebody’s singing opera.

Across the walkway in a booth draped in primary colors, a man peers down the sight of a suction-cup dart gun: there be ducks on them walls. Shoot four yellows in a row and go home one rubber duckie richer. The off-screen action is refreshingly tangible; even the tinny thwack made when your plunger hits the board gives off a meaty resonance befitting a much larger loadout.

The shooting gallery demonstrates a virtual game available to users of the FunChat app. One of the developers explains it as a messaging system with customizable chat bubbles, realtime games, and pranks—hit a button and make your friend’s phone burp or fart. Similar services have been hugely popular in Japan for years.

“No one’s getting shot in our games, like everything else going on here,” he says, pointing out over the showfloor.

“Except the ducks,” I add. He admits this is true, laughing. “But they’re inanimate objects, so it’s okay.”

I take my sticker and bid the duck hunters good tidings. As I walk past the monolithic cavern for Activision’s Call of Duty: Modern Warfare 3, I realize I’m seeing it for the first time. How did I miss this? Later, I pass EA’s booth, a city neighborhood of cauterized white walls and slick demo units. The space is massive; I somehow ignored it until then, after we’d begun our self-herding through the double-doors and back into the lobby, pushing ourselves out the main entrance, under an early evening sun noticeably dim in comparison to all that plasma. I wonder what it means, that I’ve missed so many of the über-popular offerings on hand and instead found myself waving plastic magic wands, pining over toy water fowl, hanging around a fake Jesus.

I don’t have children, rarely attend church. I do love a moist leg of duck confit, slow-roasted in its own fat, but this seems immaterial. Then I recall the last bath toy I purchased: a small rubber duck with a Red Sox cap I sent to my nephew for Christmas one year. My sister and her family live in Michigan; I’d moved to Boston for grad school. Before wrapping it, I wrote “Uncle Ducky” with a Sharpie on the toy’s smooth, water-resistant feathers. A slow trickle of recognition: My best friend and his wife, also back in Michigan, are huge Harry Potter fans; my mom worked at our Methodist church for 10 years. Assaulted by the industry’s biggest and best hopes for the future, I’ve inadvertently sought out shards from my past.

Before leaving I stop by the Videogame History Museum. Four long tables hold old consoles and electronic toys: Intellivision, Famicom Disk System, Tomytronic 3D, Vectrex. Slightly newer systems are hooked up and playable, from the NES to the Sega Saturn. Along the back wall sits a row of upright arcade cabinets. I step up to Asteroids and push Start. As I’m playing a voice behind me says, “Get 10,000 points and I’ll give you a hat.” I never see him, his face murkily reflected in the black cosmos. At 7,000 I die twice in succession; my hands grow slick, my body warming with the dull heat of increased blood flow. For some reason I really want this hat. A UFO sweeps across the screen, its vibrant beams sliding towards my ship. I thrust up, then left, turn to fire, miss once, then thrust forward, knowing if I don’t connect now I’m toast. My triangle’s aim is true; the little bugger disintegrates. I’ve broken 10,000.

“Nice,” says the challenger. “I’ll leave this up here for you.” He drops the hat on top of the cabinet and walks away. Soon I lose momentum and the game. I pick up the hat, anxious to see my prize. It’s a red baseball cap with black suede brim, an Acclaim logo from the now-defunct publisher on the front. On the back, in capital letters: “Clambake 2002.”

I sit along the carpeted edge of the room, watching others look over the tables, pointing at remembered husks of plastic and wires with something close to ecstasy on their faces. A group next to me is gathering to leave soon, tired from the day. Another joins them, exclaiming, “They have E.T. over there on Atari!”  They eke fatigued murmurs of recognition. Now whole, the group is ready to go. The excited one looks newly energized, jazzed by all this old stuff.

“I like ending things off on classic videogames, you know?” He looks back one last time. “Bringin’ it home.”

Read about the first, second and last day of E3. Photograph by Dennis Hill