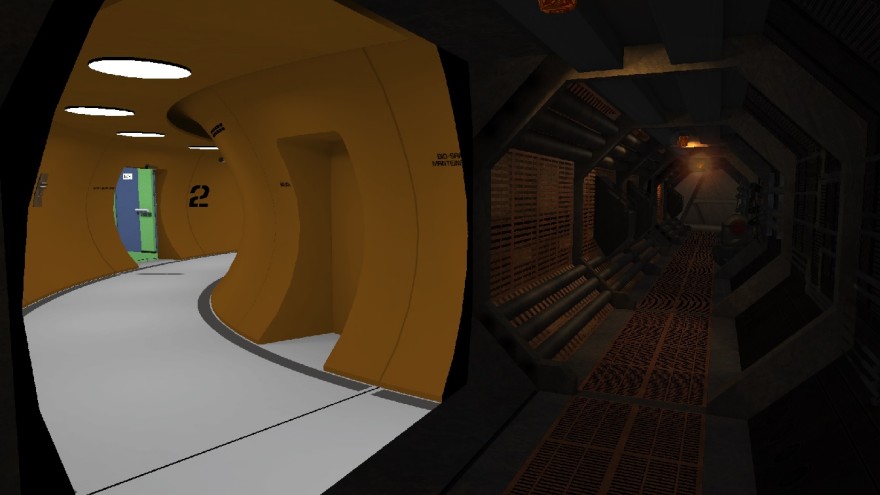 Corridors are a significant architectural space in a lot of science fiction films. Perhaps you haven’t considered this before given the brevity of their screen time. And that’s largely due to the corridor’s purpose as an interstitial space that connects rooms, meaning they are usually walked or ran through, and not dwelled upon.

One of the first lessons in filmmaking is to cut out any unnecessary footage when editing, and the example used is often a shot concerning a character walking between locations. It’s a lesson that informs its student that the corridor is a waste of time, for the most part. Hence, when a corridor does make an appearance in a film, it is never happenstance; it’s always for effect.

Take the Death Star in Star Wars Episode IV: A New Hope, which is depicted almost entirely as a labyrinth of imposing corridors to be run through. This builds the idea that the space station is a hive of militaristic activity with soldiers constantly striding through to deliver messages to their superiors. Everyone is walking and talking; people in a constant state of transit in front of the camera.

Later on, the same corridors play host to Han Solo and Chewbacca’s escape, forcing them to run and shoot in a half-backwards manner at the pursuing Stormtroopers for the lack of cover. Similarly, in Alien, Ellen Ripley alternately dashes and creeps through the hissing smoke and spinning red alarms of the Nostromo’s corridors as it counts down to self-detonation. These narrow, dark passages are the veins and arteries of this enormous starfreighter, which has become host to a deadly creature. The corridors provide nowhere for Ripley to hide but are the quickest way for her to reach the evacuation shuttle that she has prepared for herself.

sci-fi corridors lend a plausibility to the entire set.

I’ve used these two films as examples as you’re probably familiar with them, even if you’ve not deliberated much on their distinctive corridors before. To be fair, I’ve only bothered to lend this much thought to the subject after coming across Serafín Álvarez’s ongoing research project on sci-fi corridors. His work is concerned with how popular culture uses technological and scientific developments to construct its experiences. So far, for this specific project on sci-fi cinema’s corridors, he’s got an archive of stills taken from various sci-fi films, and an hour-long cut of corridor scenes taken from many of the same films (the link takes you to a teaser).

Most recently, he’s recreated many of these filmic corridors in real-time 3D and pieced them together as a videogame maze, simply called “Maze Walkthrough.” The result is a fascinating composition of sci-fi’s many flavors as seen entirely through its corridors. It has you move at crawl-speed in a first-person view through each faithful reconstruction. The attention to the lighting, dimensions, decorations, and even the footstep sounds of each corridor appears as a flawless mimesis. Forget visiting the film studios to get first-hand experience of being on iconic film sets, this is free and it gives you the time and space to let you immerse yourself into tens of sci-fi film locations, one after the other.

What you’ll realize while experiencing Álvarez’s network of digital architecture is that sci-fi corridors lend a plausibility to the entire set. The first corridors in 17th century Italy were intended as spaces to separate opposing groups of people—the servers and the served—and in sci-fi they tend to take on an even more utilitarian role, especially for engineers. (Update: Kevin McLeod, who has researched corridors, has reached out to correct us here: the first notion of corridors can, in fact, be traced back to Chinese symbols from 12th century BCE, and were first used to courier information.) They’re often lined with piping and tubes, and other gadgetry that connects the disparate parts of gigantic spaceships. Sci-fi corridors are also used as purveyors of scale, informed by the never-ending straight lines, curves, and cutting angles of futurist art. And they also offer tone, especially as a place to build tension before the release of entering the room at the end, by being dimly lit, or bathed in rich greens, blues, and reds. There’s also my favorite variation: decaying canals of computer parts belonging to post-apocalyptic hardware. Sci-fi’s corridors show us how its unreal spaces are able to function, to exist, like when you look behind a television and see the coiled mess of wires.

But, out of all of Álvarez’s recreations, the one that sticks in my mind is the gravity-bending rotating circular corridor of 2001: A Space Odyssey. It’s marked out as different from the rest as you have to descend a ladder to reach it. When you reach the bottom, your brain has to catch up as you walk around a corridor where ceiling, wall, and floor converge. It’s delightfully dizzying.

What Álvarez does is let us experience for ourselves the many ways that sci-fi film plays on our fears, and the attractions, of our imagined futures. The best sci-fi can be believed as a possibility, as a warning of what might come, and the corridor lends credibility to the incredible spaces in which these ideas are divulged. And so the corridor is a fitting architectural focus for Álvarez’s outline, as it’s a conduit where our curiosity can be sustained; where it is yet to be resolved by the destination at its end. His videogame maze holds us in that magic as we move through a perpetual architectural limbo.

You can download “Maze Walkthrough,” and see Álvarez’s other work on sci-fi corridors, here.