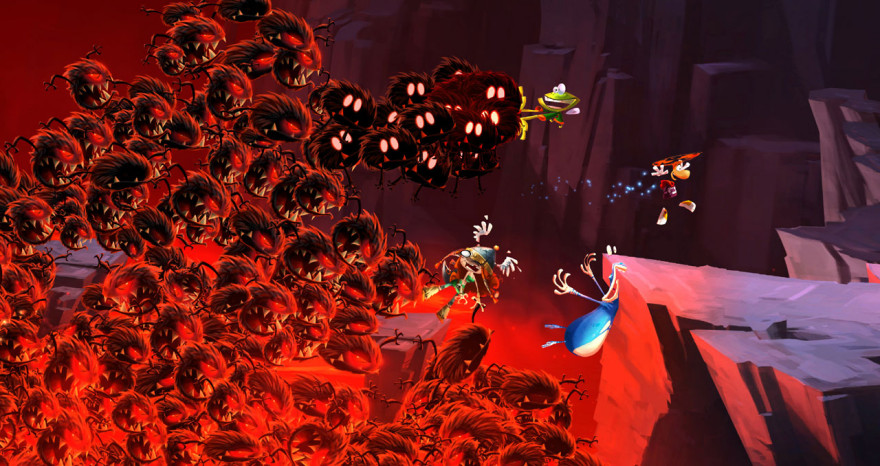 Rayman: Origins was a monumental return to relevance for Ubisoft’s B-list mascot platformer born in the 90s. I loved the colorful, creative worlds and challenging gameplay when I reviewed it last year, though underwhelming sales made a follow-up unlikely. When news of a sequel leaked out with a promotional video of the game running on early Wii U development kits, fans geared up for another round of slap-dancing and limbless tomfoolery. With Nintendo’s HD system low on post-launch software, Rayman was a bright light, ready to be shipped in late February.

Then Ubisoft announced two things: Legends would be ported to both Playstation 3 and Xbox 360, to be released in the fall. And the Wii U game, all but wrapped in plastic, would be delayed  seven months to release at the same time.

Moments later, fans eagerly awaiting the game took to Miiverse, the Wii U social community of typed and hand-drawn messages, and made their displeasure known. Loudly.

Each game and app released for Wii U has a corresponding Miiverse community, where fans can post questions, draw pictures, or share boastful screenshots. The sheer output of remarkable art, all done with a stylus on the GamePad’s 6.2 inch screen, has been a consistent highlight for early adopters. Developers can even drop in and engage with the community directly. Such access comes with a caveat: When things go south, there exists a focused arena for public venting.

Those with an online connection will not be surprised to hear this. Agitated fans turning against the creators of a beloved property with misguided rage? Outlandish, I know. But the rumors are true. What’s notable about this latest surge of ill will is how a forum designed for the express purpose of sharing information and excitement over a released game can swiftly turn into something completely different: a depository for popular dissent.

Whether the blowback will bear fruit is up in the air. Many are calling for the Wii U game to be released first–developers who worked on the game have said it’s basically finished, with Rayman creator Michel Ancel even getting in on the protest–but the reality is much stickier. Microsoft won’t allow games published first on competing services such as PlayStation Network to be released on XBox Live Arcade unless there’s additional content. With the 360’s install base close to 76 million, having a seven year head start of the Wii U, it makes zero financial sense to release Rayman: Legends exclusively to a population 1/20th that size, even if more of them feverishly await the game.

Publishers and developers used to toil on games in anonymity before releasing them onto a separate, expectant public. Now the veils have fallen away, the distance growing shorter between the seething masses and the previously-confined creators. Hideki Kamiya regularly interacts with fans via Twitter; Kickstarter-funded efforts like Double Fine Adventure open up the development process to fans through videos and Q+As.

Such access comes with a caveat: When things go south, there exists a focused arena for public venting

Such transparency can offer benefits to both sides: increased exposure on the one hand, with useful feedback on the other. But the Rayman Miiverse tirade exposes the negative potential for an increased level of access. A company opens themselves up to reputation-hurting criticism, and fans push for changes that will likely never occur, risking disappointment all over again.

Ubisoft’s Miiverse community for their Uplay app, a rewards system for players of Ubisoft games, is bearing the brunt of the criticism. One popular drawing by user Geonicus shows a car with license plate “GTAV” and a familiar looking go-kart running over a squashed Rayman scarred with tire-treads. Rockstar’s next Grand Theft Auto and Nintendo’s new Mario Kart are expected this fall, alongside a bevy of other juggernauts (plus two potential next-generation consoles). By waiting to release a relatively low-profile platformer into that gauntlet, Ubisoft risks their charming Rayman getting lost in the shuffle. A liklihood their fans are only too happy to flaunt.