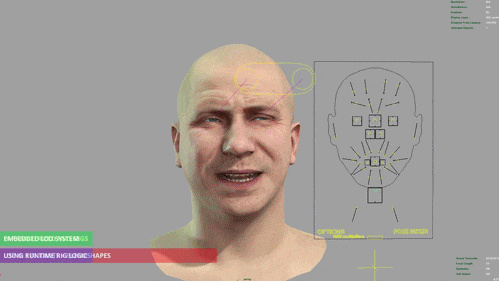 Human facsimiles indistinguishable from the real thing, have we got ‘em? Not quite yet, but we might be incrementally closer, maybe. Two animation foundries, 3Lateral and Cubic Motion, have been developing tools to make 3D real-time facial capture easier and more editable. It works like this: Cubic Motion sets ‘em up and 3Lateral knocks ‘em down—i.e., the tech was created by Cubic and 3Lateral has been employing it to get disturbing reads of gangster fiction from Scottish actor Alec Newman.

Some things to keep in mind before being artificially threatened by a disembodied head in the YouTube clip below: One, we’re at the point where photorealism is offering diminishing returns; is the Nathan Drake of Uncharted 2 really that much more ruggedly handsome than the Nathan Drake of Uncharted 3? (The action figure has them all beat, by the way.) Two, Cubic Motion’s tech was licensed for many of this year’s blockbusters, including: Call of Duty: Advanced Warfare, Middle-Earth: Shadow of Mordor, and Wolfenstein: The New Order. And three, something strange happened to Alec Newman’s nose in the transition to digital, because that is not his former aqualine bridge, that is a schnozz.