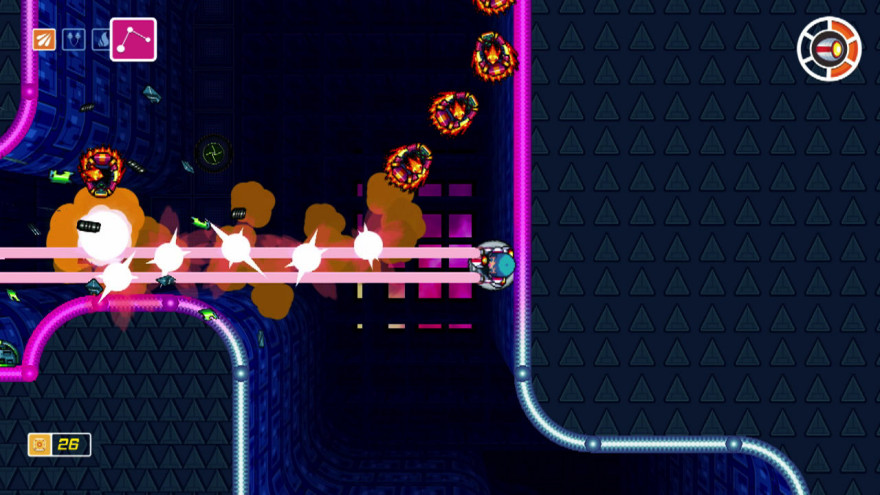 Title:
Scram Kitty and his Buddy on Rails

Scram Kitty and his Buddy on Rails is Defender for the Nyan Cat generation. Your goals are two-fold: 1) shoot down swarms of pesky enemies; 2) track down and save the innocents. In the 1980’s arcade classic, these were aliens and humans, respectively. Today we must save cats, because cats have become the Alpha and the Omega, the Yin and the Yang. Where ancient Egyptians honored Bastet the cat goddess and Maahes the lion god, we praise the almighty tandem of Lil’ Bub and Grumpy Cat. Dakko Dakko, developers of the Wii U-exclusive Scram Kitty, has added another feline to the present mythology. And as it is in life, the cats here run the show; we’re just human slaves to the master species.

I was always a dog person. Maybe that’s why it takes me hours to unravel the mysteries of what makes Scram Kitty tick. To be sure, this is a serious game. Don’t let the day-glo visuals and cartoon aesthetic fool you. I expected a leisurely stroll through the first few levels named “The Approach.” By the third, I died repeatedly while targeted by a persistent red-faced mouse-tank that disappears when you shoot it. What was meant as tutorial became a blank-stare warning: Are you sure you belong here?

You control a ship attached to an undulating series of rails. You don’t fly freely in space; instead, you roll along a track. You also shoot a simple double-barreled gun that will be upgraded in certain levels, but aim is restricted; you fire perpendicular to your track placement. And you can jump. By moving and jumping at the same time, you can float around circular tracks and sling-shot to other tracks farther out.

The first lesson of Scram Kitty is simple movement. The perspective causes much of this initial trouble; the game is viewed from above some floating space-station, and since you’re connected to the periphery of each level’s structure, you need to push in the direction of the track to move. Pushing right only moves you until the track bends around. Now you have to push down. And so on. The adjustment isn’t just motor, but neurological.

Gravity and physics are at play here more than in more traditional platformers. Even your gun becomes a kind of thruster, pushing you backwards to the track more quickly and acting as a reverse booster. What feels simple, frustrating and too limited at first becomes a means to pulling off complex maneuvers with ease.

And you’ll need to. Scram Kitty stays true to the cat-as-master paradigm. You’re meant to play on the Wii U’s GamePad screen; on the television, the action zooms in and out for the benefit of friends watching. But when you get stuck or are lost, the titular Kitty herself pops up on the big screen with a helpful tip. An unintelligible space-wobble acts as a “Meow,” the actual message translated into text scrolling across the screen. While playing, though, with face planted down at the GamePad screen, the text cycles across the TV in such a hurry that by the time I look up, I almost never see the entire message. Maybe this is purposeful; my real-life cat, Charlie, meows and meows, and my simpleton human brain never correctly guesses her needs. Later I’ll find a hairball on my pillow. In Scram Kitty, that equates to repeated death at the hands of mice whose only goal is to torment and destroy. In both cases, I get what I deserve.

Soon playing it became a test of endurance, a jolt of pleasure, and a pain-inducing trial all at once.

Slowly, I accrue the needed skills. If I jump while in the air, I bounce into what’s known as a “spinboard.” My ship becomes a glowing fireball, hurting enemies and flinging me farther out beyond my track. Scattered across the rails are “pennies” and power-ups; they become mandatory in the levels immediately preceding the early tutorials, in which mice enemies spill out of vents, equipped with laser wands, scattershot guns, and giant lasers. They horde along the edges of the track, and I bounce from surface to surface to hit them. Firing, then, becomes entwined with moving through the level: Just one more complication to unravel like, dare I say, a knotted-up ball of yarn.

Roll far enough and find the exit and the first cat in need of rescue. Others remain hidden behind collectible quotas; one floats openly but skitters away, jettisoning off to somewhere else in the level, while a manic timer counts down. Finding the cat once only shoots it off to another hiding spot. All the while energy rails shock you or send you plummeting down to the the void below.

Scram Kitty is a game that shrugs off modern-day descriptors. It’s not a throwback. It’s not an open world. It’s not a roguelike. There are no QTEs. No pixellated faux-8-bit art. Everything’s slick and beautiful in some weird, Neo-Hanna Barbara future world of space cats and perpetual sunsets.

Just moments ago I re-played those first four levels. I completed each in seconds. What changed? I had mastered the rhythms necessary to play. You acquire this game. It is not given to you. You learn. You struggle. You die a lot, which, in the service of rescuing cartoon kitties from cartoon mice, hurts a bit more than if it was just another rocket launcher to the face.

But it hurts so good. Soon all I wanted to do was play more Scram Kitty. Soon playing it became a test of endurance, a jolt of pleasure, and a pain-inducing trial all at once. Out there in the cat-infested internet, there is a looped version of “Nyan Cat” that runs for ten hours. It has been viewed 32,161,878 times. I am listening to it now. There is a market for this kind of happy pain, this agonizing joy. I just hope Dakko Dakko’s rotating, riveting shooter finds the cat-crazy audience it deserves.