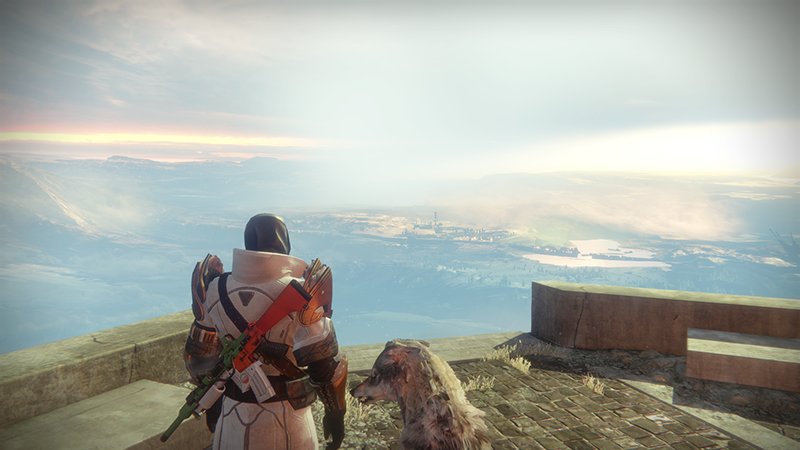 This is an open letter to Lord Saladin—more like Lord Sala-didn’t think I was going to complain about your dumb dog rules, eh? Joke’s on you.

You’re tired. Lord Saladin looms over you while recanting old tales of the Iron Lords. The push against The Fallen was long and gruesome. You made it out alive with only a few dings in your gear, signifying that the battle was a modest success. Expectations of relaxing after the raid were thrown out the window as soon as you saw the wolf-man himself, awaiting your return. In your head, you think: Lord Sala-didn’t know when to quit talking. He stops pacing back and forth and looks down at you. “No one truly knows how the Iron Lords died their final deaths. That was something you had to be there for.”

You liked to think that you were listening to him the entire time but, truth be told, you were too busy staring at the two beautiful wolf-dogs sitting obediently on either side of Lord Sala-don’t touch my dogs. They were massive, muscular canines with sharp teeth and keen eyes—more importantly, they were good boys. They were good boys that deserved to be pat on the head. Lord Saladin catches the yearnful gaze you cast upon his wolves and he frowned disapprovingly. “You cannot pet the wolves,” he tells you. “They are not pets. They are wild animals.”

Destiny: Rise of Iron was released on September 20th, boasting a new story campaign followed by gear and wearables. A new Crucible mode is included as well. There’s a lot of new content for players, but one important gesture seems to have been overlooked. Where is press A to pet dog? A recurring theme among Rise of Iron seems to be that Bungie emphasizes that the wolves inside the game cannot be interacted with. Your heart breaks for the good boys of Destiny.

Are not all good boys entitled to pets? If they fit the criteria of a good boy, then they deserve to be treated like the best of boys. Is a wolf not entitled to have the fur on his back fluffed up by a gentle, loving hand? Would Lord Saladin deny a dog the crooning of “who’s a good boy?” into their perky ears? How else are they supposed to know that the Iron Lords appreciate them if we are not allowed to throw ourselves at the four-legged fantastic beasts? Wolves are just bigger boys. Let us pet them, Lord Saladin.

Are not all good boys entitled to pets?

You get up and gesture to your armor—overtop the chainmail protecting your body is a giant chestpiece with a wolf silhouette that is literally on fire. Resting on your shoulders are two massive wolf heads crafted from metal, mouths ajar with a tongue made of fire and eyes burning with the red-hot desire to pet some dogs. Lord Saladin gazes upon your armor and shakes his head. “They are wild animals,” he repeats. He turns on his heel and begins to walk away from you.

But there are dog-petting loopholes before you. If you walk up to a wolf and have the correct emote in front of him, you can hug him. You may not be able to pet the good boys of Destiny, but you can doggone try.