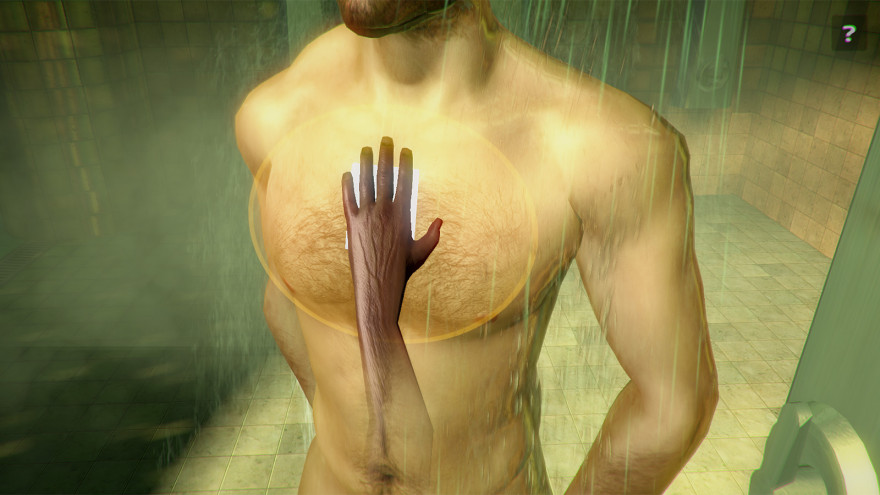 You want to be that water.

Yang has been thinking about this popular fantasy recently as his latest game is essentially an interactive version of it. Rinse and Repeat lets you scrub a hunk down in the public showers. The whole thing has the unreal qualities of a dream. He marches in like something out of a movie, slow-motion, sunglasses on, dick censored but properly out, a hazy track playing loudly with the kind of guitar twang you’d hear in a ’70s porno. He takes the shower next to you. You’re looking at him as the water runs over the chiseled shapes of his body; hard pecs, a tidy waist, strong angular back. You want to be that water. And then he gives you a chance.

The lead-in is believable and this is somewhat important for the fantasy. He turns around and asks you to scrub his back. This could happen. Not everyone can reach their backs and give it a good scrub. It’s when he asks you to help him out with his pecs that you realize that this is more than a friendly favor. But, as with real relationships, the initial attraction isn’t enough here. You have to commit, to gain his trust, to listen to him.

Yang considers Rinse and Repeat to be a semi-sequel to his spanking game Hurt Me Plenty. He says he got a lot of requests from people to play the submissive (the one being spanked) in that game rather than the dominant (the one doing the spanking). And so Rinse and Repeat has you switch sides by looking up to and caring for another person, but doing so on their grounds.

Yang gets this across in two ways. The first way is through the feedback you get while you scrub the hunk down. He’ll tell you what feels good, to go “deeper,” or that he likes it slow. After washing each body part he turns to you and a percentage score beamed in front of his face tallies up how pleasurable your effort was. It makes you want to please him more. He groans and says “fuck yeah” while you’re caressing him and you’re eager for that eroticism to continue.

“In sex, the notion of waiting is very important”

There are five body parts to scrub in total but you won’t get to do them all on the first go. This is the other way you become submissive. To fully wash the hunk in the shower you’ll need to meet up with him on at least three separate occasions. But it’s not a case of going back to the main menu and then returning to the virtual shower immediately after each session. The hunk only turns up in the showers at specific times and on specific days: after his gym class, and you need to work out which one it is by consulting the schedule scrawled on the bulletin board, plus you need to be accurate to the minute. “Don’t fuck it up. Show up when he’ll show up, right after class. Set multiple alarms on your phone, mark your calendar, clear your schedule,” reads the game’s description. Yes, you need to properly commit to this outside of the game.

As Yang points out, Rinse and Repeat isn’t the first game to employ these “waiting mechanics.” Michael Brough’s VESPER.5 is the game most similar to Rinse and Repeat in that it only allows you to move one step per day across a 100-day adventure. The challenge with this is incorporating this commitment into your own life. And so it makes sense for one of the goals that Yang wanted to achieve with Rinse and Repeat. And that is for it to reflect the importance of waiting in real sexual relationships.

“In sex, the notion of waiting is very important,” Yang writes. “Some people wait to have any sex until they are married, some wait to have sex depending on their menstrual cycle; some are tired, some don’t feel like it, and some just plain don’t want to.” It’s a big change to the kind of sex that usually does appear in games. Typically, sex is provided as an instant reward for performing a simple task. The other person doesn’t have a say in it, they usually don’t even show signs of enjoyment, they kinda just take it.

As with Yang’s other sex games, Rinse and Repeat importantly brings in the agency of your partner; the body at the center of the fantasy. (These notions of consent are particularly emblematic given that it takes place between two men in a public shower, which is a typical set-up for male rape narratives.) And it’s not just through how it makes you wait and work at the relationship through his feedback and precise scheduling, but also in its eventual ending. To find out how exactly it does this you’ll have to play the game for yourself (or check out Yang’s spoiler-filled article on its development).

Rinse and Repeat is available at a pay-what-you-want price over on itch.io.