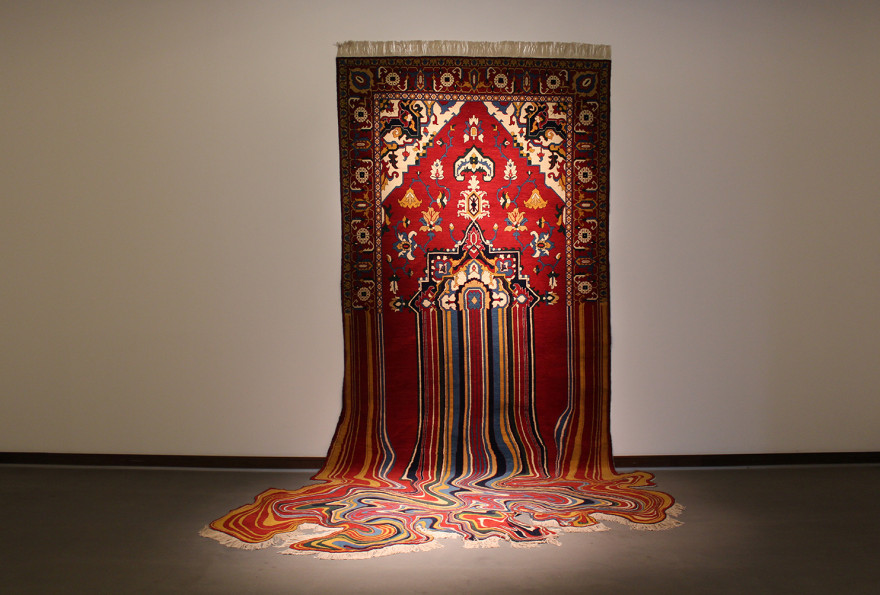 If patterns are a language, as artist Faig Ahmed describes them, then his trippy redesigns of traditional Azerbaijani rugs are a dramatic rearticulation.

One of his woven carpets stretches like a VHS error midway down and melts onto the floor in a pool of swirling colors. Another rug hangs half-pixelated, the intricate patterns visible on one side minimized into thick squares on the other. Several others feature an untouched, ornate border around a void of floating cubes, or spherical protrusions behind a sunken field, or a spiral cone bursting through the medallion; a modern brand of psychedelic framed by an ancient craft.

Ahmed’s stunning abstractions of classic textiles merge what he refers to as a long-running human tradition with a seemingly glitch-inspired aesthetic. Rugs within rugs within rugs. Rugs warped out of shape, bleeding neon, fragmenting into patterns new and unfamiliar to the established vocabulary.

Several of Ahmed’s works are featured in Crafted: Objects in Flux, an exhibit dedicated to new methods and materials of contemporary craft.

Find out more about Faig Ahmed and his glitch rugs on his website.