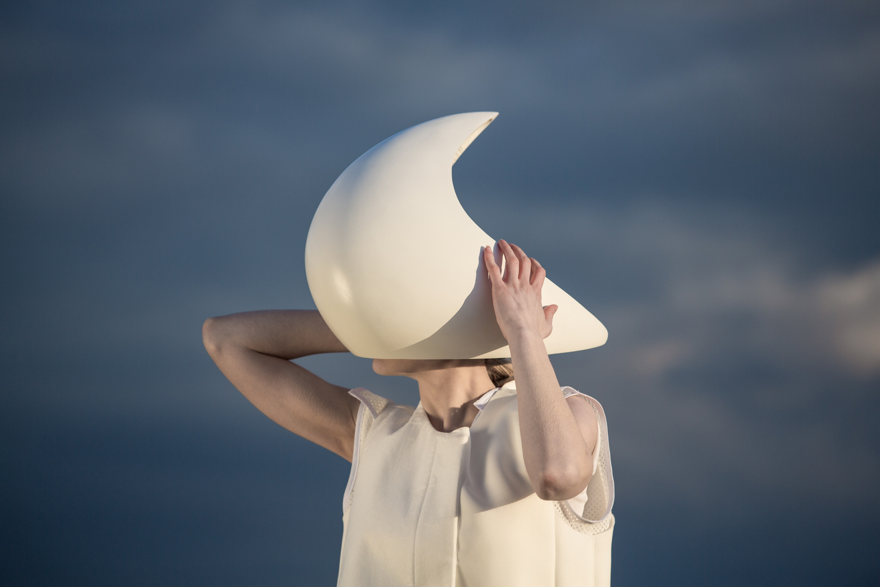 Your Oculus rig—estimated cost: $1,500.00—may be spectacular, but it contributes nothing to the world around you. You might as well be wearing a bulky sleeping mask. If you were a more considerate person, you’d wear a more sculptural headset while enjoying virtual worlds.

Behold, then, the three headsets FIELD created for its Violescence exhibition. As you may have noticed, these headsets are more than sleeping masks. They are wearable sculptures whose swooping lines are reminiscent of Lance Armstrong’s time trial helmets and Henderson motorcycles from the 1930s. Rendered in flat white, the headsets turn their wearers into digital-era peacocks. Best not bury your head in while wearing the headsets, however.

Violescence is supposed to explore “the constant negotiation of opponent, archetypical forces: the aggressive, the sensitive, the inquisitive.” Indeed, wearing a swooping white headset is a remarkably aggressive act. It is much more disruptive to those around you than Google’s cardboard or the Oculus rift. It’s probably not safe to move your head in a crowded space while wearing any of these headsets. One might therefore suspect that these headsets amplify what Gawker called Google Glass’ “Glasshole” problem.

There’s something considerate about a large, visually intriguing headset.

But there is also something considerate about a large, visually intriguing headset. Sure, they may command more space and attention, but they offer something in return. Whereas other headsets are designed in a way that only serves their wearer’s needs, FIELD’s creations attempt to provide positive externalities. Even if you don’t appreciate every aspect of their designs, these headsets attempt to set a dearly needed precedent. Hopefully more sculptural headsets will follow in their wake.