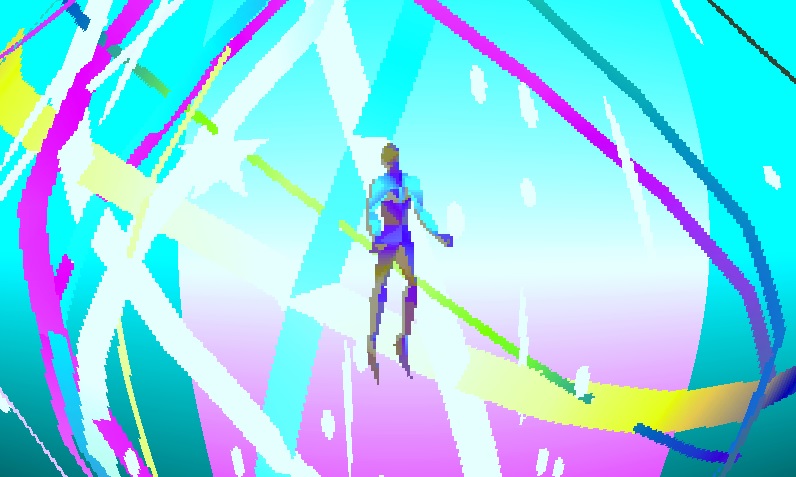 SEAQUEST1992 might be the most vaporwave game ever made. This isn’t only due to its deliberate similarities to 1992’s action-adventure Ecco the Dolphin—which has since lent its namesake to vaporwave’s iconic ’80s-pop mixtape Eccojams—it’s a smorgasbord of the movement’s entire characteristics. It’s hard to know where to begin it’s that compact with the evidence.

a dream-like rendition of sea life

Starting with the basics, it’s an underwater adventure about the struggles of undergoing a merperson transformation. Its affinity with oceanic lifestyles and mythology partially qualifies it as seapunk (one of vaporwave’s musical informers). Combine that with the stylized N64-era 3D graphics, which depict a dream-like rendition of sea life, dotted with Asian lettering and other idolized exotica, and you have a firm vaporwave aesthetic.

That’s without taking into account the music. Saccharine, hyper-gloss chillwave occupies your swim through one area. While another track loops muffled samples of hypnagogic pop over tape hiss. Outclassing these is the business class lounge jazz and its heavily processed percussion. It’s an entrancing mix of dreamphonics that suitably accompanies the game’s journey which, it is worth noting, is played out in between actual dreams the character has.

The sound effects add to the fantasia. They’re of that that unreal, onomatopoeic style of exaggerated noises that retro games required to communicate what the visuals couldn’t (a “whoop” was a jump, a “pew-pew” was shooting a laser). Almost immediately, the sound of the character swimming will hit you like a wet fish around the face. It has this thick soupy texture, lying somewhere between the squirmy sound of your stomach churning and a crunched-down photon laser being fired. Collecting the many triangles that populate the coral labyrinths comes with the more familiar electronic chirp.

All of this vivid material invaded my eyes and ears while playing SEAQUEST1992. It was impossible to see it for anything else other than its immediate presentation. It wasn’t until I happened upon a repeatedly frustrating chase sequence involving waterfalls and a hungry shark that I looked for anything else inside of the game. What I discovered was that it isn’t only a pleasing remix worthy of vaporwave’s catalog.

the struggle this shark introduces has allegorical value.

SEAQUEST1992 was made as part of JamForLeelah. This was set-up to, as it reads on its website, “raise awareness on LGBTIQ issues, specifically trans youth issues and Leelah’s Law as well as an attempt to raise money for trans specific charities such as the Transgender Law Center,Camp Aranu’tiq, and the Sylvia Rivera Law Project.” It’s an attempt to bring change through creation in honor of 17-year-old transgender girl Leelah Alcorn who took her own life in December 2014. This was a result of many factors, but chief among them was being forced into conversion therapy by her parents.

A requirement of JamForLeelah was to center the game’s conceit around “trans issues, or other issues related to gender identity.” This is where the transforrmative journey of SEAQUEST1992 comes into play, as you seek to lose your legs in favor of a tail. You undergo the change from a humanoid figure unsuited to the underwater life to an entity that thrives in this specific ecology.

For the most part, the chunky colors and chipper tunes depict this as a wondrous journey. You swim, you collect triangles, and you enjoy nearly every moment as you explore the maze of Neptunian architecture. This is a world based on Leelah’s interests in art and music, as she shared on her Tumblr. But then that shark turns up and ruins it. However, after reading up on the context that the game was made within, I realized that the struggle this shark introduces has allegorical value. For it must be overcome, as it represents the endeavors that arrive with any process of transformation.

And so, with Leelah in mind, I swam back into that tunnel, where the shark had already chewed me up so many times. And I tried and tried and tried again. Unfortunately, I have still not beaten it. But that’s okay, as whenever I need respite I can return to Leelah’s magical, musical world to calm my spirit before trying once more.

You can play SEAQUEST1992 for free in your browser.