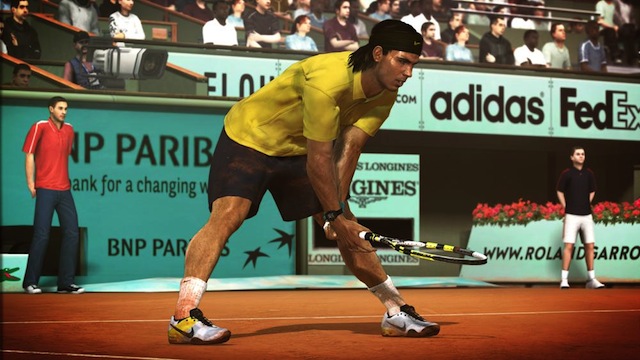 Going Christmas shopping for a gamer on the list should be a pretty easy task. You casually strike up a conversation about what games they’ve played on the year, and get them something they haven’t. It’s tempting to draw inspiration from a best of Metacritic chart, and leave it there; the more ambitious shopper, however, will scoff at such carefully weighted averages. Rather than sticking with the same old critically acclaimed list of possibilities, he or she will dare the recipient to take a new interest in something that might be a little trickier to get into at first, but will eventually pay off in spades.

The more ambitious shopper will make a gift of Top Spin 4.

Why, you ask, should a year-and-a-half old sports game be the prize get of your shopping list? Because it’s amazingly fun, and offers a window into enjoying tennis, which may be one of the most viscerally pleasurable sports to follow. If you’re not immediately convinced by such effusive platitudes, or if you think sports — especially tennis, of all bourgeois pursuits — are a waste of time, let me do a little bit of backtracking to show how I came to this conclusion.

I write about sports for a living, but there’s no one specific beat I stick to; instead, I’ve got to be aware of everything, from football and baseball to NASCAR and golf, depending on what the day’s biggest stories are. Most of the time, the big stories write themselves. Other days, I’ve got to do a mess of research so that I can capably write about an event I wouldn’t naturally follow in my spare time — which, up until this summer, included tennis.

Wimbledon was beginning at the end of June, and I was going to have to write about it because it’s the tennis tournament to end all tennis tournaments. In an attempt to familiarize myself with the event’s history, I hit Wikipedia for recollections of tournaments past, and YouTube for footage of the prime players. It was interesting, but it wasn’t quite clicking; I still thought of tennis more as the dreary sport my mom loved to watch when I was younger, and didn’t see much to tether my attention to. But on a whim, I also downloaded a demo of Top Spin 4, which I’d read was the best — and only good — tennis videogame on the market, Mario Tennis aside, and began fiddling around with the limited options. I didn’t know how to play, and the demo didn’t offer much instruction. Instead, I just ran around hitting buttons at random while trying to figure it out.

There are something enthralling about it, though I couldn’t articulate what exactly. The animations were fluid; the digitized faces expressive. I liked the moments when I’d time a shot correctly, as rarely as it happened, and would whip a ball past the outstretched arms of one of the demo’s few playable characters. I wore it out over a few days, and I kept watching Wimbledon even though nothing worth writing about had happened. On even more of a whim, I saw a used copy of the game in a GameStop for barely $15, and decided to pick it up. Owning the full version hadn’t changed much; I still wasn’t very good, and the career creation mode was providing more humiliation than learning curve, as I continued to get dominated by the low level, randomly generated bots.

But a day or two later, something sparked. Having not gotten any better — and yes, in a telling appraisal of my social life, I’d already ground plenty of hours into the game — I turned on the TV to catch Roger Federer, Living God and widely acknowledged greatest player of all-time, playing his fourth round match against Xavier Malisse. Watching Federer pick apart the clearly overmatched Belgian, it occurred to me that what the game’s training academy couldn’t teach me, I could pick up from the most obvious source: The actual, real life tennis matches. Simply keeping an eye on where the players stood, where they moved, and which types of shots they used in different situations was more instructive than playing things out in the videogame, where I was likely to lose again and again without learning much, given the speed of the matches. On the other hand, watching Wimbledon was like watching two highly skilled Top Spin players go at it — except, of course, that they were real, breathing human beings. A master like Federer, vying for his record seventh Wimbledon title, unlocked the game’s possibilities in ways I’d never considered. Controlled by my human hands, he was stiff and hesitant; on the greens of the All England Club, he moved with ferocious grace, effortlessly pacing the court and swinging his racket like it was an extension of his arm.

A symbiotic relationship was born. Not only did watching the tennis matches help cue me into how I should try to make my avatar play in Top Spin, but my ability to succeed in the game hastened my enjoyment of the real version. As silly as this might sound, becoming proficient enough to enable the digital Roger or Rafa to win at increasing difficulties against the game’s capable A.I. gave me a new level of appreciation for how challenging it was to play at such a high level on the physical court, and made me more eager to seek out highlights of classic matches and journalism exhorting the virtues of the sport. Watching more and more in real life began to inspire what author and tennis aficionado David Foster Wallace once described as Federer Moments, seeing the Swiss maestro play, “when the jaw drops and eyes protrude and sounds are made that bring spouses in from other rooms to see if you’re O.K.” I found, quite pleasantly, that I could feel this way watching any player, whether it was Federer, his rival Nadal, the persistent Andy Murray, the elastic Novak Djokovic, or any other number of pros.

Here’s Wallace, again: “I submit that tennis is the most beautiful sport there is, and also the most demanding. Basketball comes close, but it’s a team sport and lacks tennis’s primal mano a mano intensity. Boxing might come close — at least on the lighter weight-divisions — but the actual physical damage the fighters inflict on each other makes it too concretely beautiful to be really beautiful: a level of abstraction and formality (i.e. ‘play’) is probably necessary for a sport to possess true metaphysical beauty (in my opinion).” Part of what made the relationship between Top Spin and real tennis such an effective one, I realized, was due to the ease of the controls, which allowed me to mimic that beauty with a little bit of practice. As anyone who’s ever played a basketball or football game knows, there are literally dozens of functions and commands to grasp in order to more effectively win. Aside from that, success in basketball games can easily come undone by the A.I.’s weakness, and any NBA2K veteran will recall the frustration of watching a CPU-controlled player fail to roll to the basket, contest a shot, or simply be in the right place. Football games carry the same problem of blown coverages and whiffed tackles; it’s technically realistic but immensely frustrating, as it takes the end result out of the player’s hands.

In Top Spin 4, there’s only the player and his ability to react to the next shot. How things do or don’t turn out is a matter of personal responsibility, not the random menace of the computer. It’s comparable to what I imagine must be the solitary feeling of standing on the actual court, surrounded by empty space, with only a single opponent to overcome. With most of Top Spin being controlled by four face buttons and the analog stick, it’s more a matter of timing and intuition for where the ball will be and when to hit it, not whether the player can quickly string together a chain of commands without making an error. The simplicity of Top Spin argues for Wallace’s transcendent aesthetic joy. It’s immensely soothing, I’ve found, to queue up a match and spend a half hour pinging perfectly placed balls back and forth; the sound produced upon hitting a “good” or “perfect” is an gentle tokk, capable of creating a calm mental equilibrium on a day when I might be a little frazzled.

In barely half a year, I’ve gone from not knowing what a tiebreak was to eagerly anticipating the spring day when the weather clears up and I’m able to sign up for actual tennis lessons, motivated by what I’ve learned to enjoy. I don’t know if you or your gift recipient will have a similar experience. But the game is available for pretty cheap, and the Australian Open — one of the four biggest tournaments in tennis, for the uninitiated — is just a couple of months away.