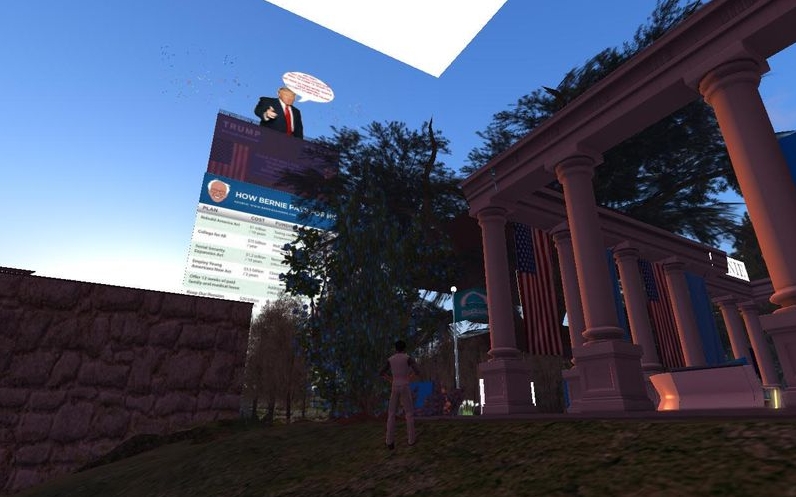 There is officially nowhere you can go to hide from the interminable agony that is this election, especially online.

To wit: Cory Doctorow, by way of Motherboard, reports that tensions between Bernie Sanders and Donald Trump loyalists have boiled over on Second Life (2003). More to the point, Trump supporters have attacked Sanders HQ, which is apparently a not-that-socialist roman fort. “Peace was shattered,” Doctorow writes, “when Second Life‘s Donald Trump supporters laid siege to the building, firing virtual guns whose rounds exploded into swastika flags at Sanders central.”

That sentence features more revelations than a week of CNN coverage, so let’s unpack it. Yes, Second Life is still a thing. Yes, some Sanders and Trump supporters appear to be on Second Life. (No, before you start tweeting, these are not all—or even most—supporters of the candidates.) This is largely consistent with Second Life’s initial premise of being a player-driven experience. “Residents can build anything they can imagine,” Robert D. Hof wrote in a 2006 Businessweek feature on the game, “from notary services to candles that burn down to pools of wax.” That is still true, and the people have chosen to wage campaign warfare.

(There are, presumably, some Clinton supporters on Second Life as well, though comedic form dictates that this is the point in the article where I point out that Hillary is actually big on MySpace or Geocities. Yuck yuck.)

Second Life is not what it once was. At this point, its most interesting spaces are deserted—a digital form of ruins porn. The existence of a Trump-Sanders war on Second Life doesn’t really change any of these dynamics, but it is interesting nonetheless. Above all else, it is a reminder that the toxic discourse around the edges (and increasingly at the center) of this campaign cannot be avoided. It is especially unavoidable online. Strange spaces that you carve out for your interests will be taken over and filled with strife. In Second Life, supposed Trump supporters will use their guns to make a swastika flag fly over Sanders HQ. It’s a fascinating episode on its own, but perhaps more effective as a metaphor for online worlds and the election that is still months from being over.