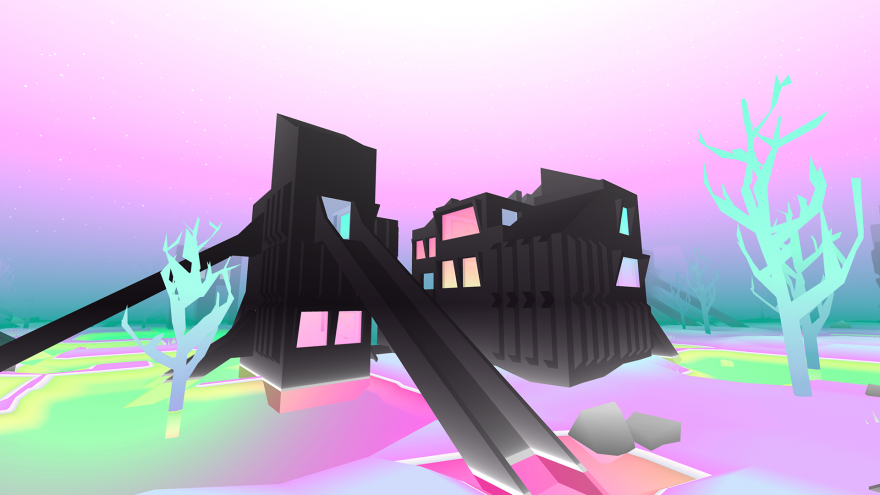 Strangethink no longer wants us to climb, or flee, or discover sacred transdimensional pathways. He wants us to walk an appreciative step through his exhibitions. Perhaps it’s a hangover from being possessed by an “art-demon”—or the next manifestation of such—as in his game Secret Habitat he dedicates an entire digital space to procedurally generated gallery experiences.

The polychromatic bogs that fester in the soft lavender soil of the game’s flattened island are occasionally stricken by the sloped black appendages of these galleries. Despite the inadequate foundations, these galleries have somehow taken root here, clinging stubborn like barnacles to a once prosperous organism that it now leaches of lifeblood. They stand like black churches, with the industrial ribbings of factories, and glass windows that reflect the surrounding colors like square pieces of rainbow.

You feel something, a fascination with the strange and alien artistry

There’s a fight going on here that you can’t see. It’s between the quasi-natural outside spaces of the lumpy island, and the angular obsidian structures with their lavishly produced and deliberately manufactured interiors. This is further distinguished in the commands upon your movement. While inside, you’re forced to a walking pace by an invisible force; a stroll that encourages a civility, almost a decadence, in your manner. And this is important, as you are implicitly required to construct each gallery experience for yourself.

There are tape players inside, sometimes up to four of them, which require your touch in order to blurt a primal groan of painful machine screams and what sound like the choruses of lost souls into the air. Like an engulfing perfume, the noise sets a tone that you can almost choke on. And then, with your footsteps you sway between the art works, delighting in a haunting kind of titillation as you match sounds, words, and paintings to create a holistic creature from the sensory formulae.

You connect the two-worded titles, such as “Walk Band,” and “Fight Strange,” with the liquid circuitry that froths and creams, or sometimes is dashed and smeared, across the inner spaces of each grey frame. I came across one painting called “First Tree,” and swear I could make out the silhouette of an enormous trunk and twisted twigs in the creases of its purple crystalline scene. Anyway, you feel something, a fascination with the strange and alien artistry. We, as humans, adore the act of manufacture, that’s one of our defining characteristics as a species, and these galleries give us assorted parts to connect into a whole formed of our own meaning. It’s ravishing, and so you’re compelled to head out to find more when the current gallery is exhausted of fabrication.

Once outside, the contrast is immediately present as you can run swiftly into the pools of rippling water, frolicking in the splashes. Even the trees dance as if caught up in a heat wave of excitement with your rushing presence. The bourgeois manner of the interior disappears in this outer ur-swamp. You may even get lost in the exhilaration for a moment; almost forgetting about the pleasantries of the galleries.

I see Secret Habitat as a commentary on the connection between nature and artificiality.

And when you do recall the paintings you saw, you might start to match their abstract contours with the shapes of the trees around you, and see similarities in the sludging formations of the muddy banks at your foot. There are certain parallels to be drawn here, certainly. Perhaps you realize that both the galleries and their surrounding bogs are atomically identical in that they are procedurally generated. The only difference is how explicit the diegesis is: nature is borderless while the galleries give us frames to focus our consumption.

More than anything, I see Secret Habitat as a commentary on the connection between nature and artificiality. “Emptiness grows,” it is stated at the beginning of the game. This points to the natural process of cosmic creation; out of nothing comes something. This could easily refer to the outside spaces of the game that, it is suggested through appearance, have formed without a guiding hand, just as nature seemingly does. But it just as easily applies to those black edifices, those procedurally generated galleries, which offer us frames to view and understand an artist’s work (even if that artist is machine code) through.

No more is the game’s thin veil between the artificial and the natural noticeable when you’re able to match the similarities between the frames of the paintings, and the framing of each gallery’s windows, which allow us to view the outside world as a carved up composition. You can stand in those galleries and be subject to multiple surfaces: the patterned tiles of the floor, the kaleidoscopic greys of the wallpaper, the trees twisting across the windows, and the violent splodges of the paintings. From where you’re standing, they’re all framed and fighting for your admiration.

Just because one has a distinct frame around it and has been given a title, is it truly more valuable, or of more artistic merit? After all, each of these images are as procedurally generated as the rest; a process that for the most part retires the presence of authorship. The frames of the paintings only enclose our sight, suggesting where we should look to find art, but they do not wholly define it. Heck, you’re looking at the game through an even bigger frame; your monitor. And this is drawn attention to by the function of the ‘R’ key in the game as it lets you take screenshots. It’s a game about the construction of images, and of art, about how we perceive and value the image.

That’s why it obsesses over the gallery experience as its purpose is to proffer a very specific image as art. It’s the frame that does this as it’s a mark of artistic intent, a sign of manufacture, and applying it can single-handedly turn nature into plastic. Just take a photograph of a forest and you have a facsimile of nature right there, it captured in a frame, ready to be subsumed by human cognizance. So, if the natural and artificial are so closely related, at least with this logic, we might go on to question the likeness of their forms. Perhaps we can describe the way nature assembles as being procedural generation? To put it another way, is an ecosystem not just a set of rules that determine an output just as lines of code do?