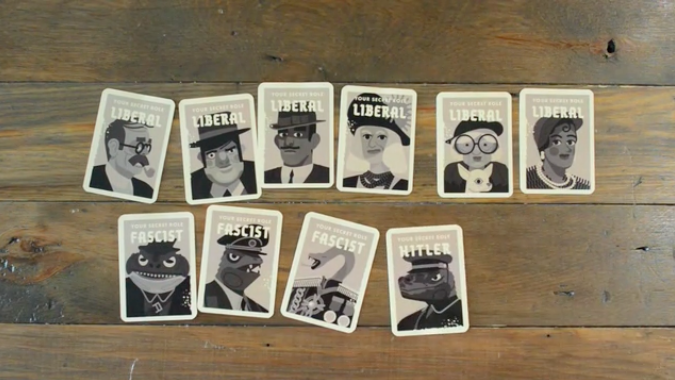 Note, dear reader, the use of quotation marks. Even though this is the internet, where people go to say such things, I do not believe that you are actually Hitler. Rather, that is an actual question that comes up with reasonable frequency in Max Temkin’s (co-creator of Cards Against Humanity) new tabletop game Secret Hitler.

This is not the setup for a joke. Seriously.


Secret Hitler takes placed in a simplified—though not stable—version of early 1930s Weimar Germany. The balance between liberals and fascists is delicate and consequently the future of Germany hangs in the balance. Players elect a new chancellor and president in each round, which lasts about as long as a Weimar-era government, and seek to pass policies. There are two ways to win the game: pass five policies or root out the identity of Hitler. That’s where the Clue­­-like “Are you Hitler?” question comes into play. As in Weimar Germany, however, both of these tasks are easier said than done.

the fundamental difficulty of identifying evil and doing anything about it.

In the context of Secret Hitler, the titular character is not a person so much as he is an idea. If there was a person who was identifiably Hitler, with all the baggage that name now rightly entails, the game would not be particularly challenging. One cannot, however, know such things in advance. Sure there are signs—Mein Kampf, rallies, speeches—but all this evidence makes much more sense in hindsight. Secret Hitler uses game mechanics to highlight the fundamental difficulty of identifying evil and doing anything about it.

We asked @nytmag readers: If you could go back and kill Hitler as a baby, would you do it? (What’s your response?) pic.twitter.com/daatm12NZC

All discussions of Hitler, even those that acknowledge the challenges of identifying evil, however, are subject to a certain amount of recency bias. In Secret Hitler’s case, it’s hard to separate the game from New York Times Magazine’s weird thought experiment about killing baby Hitler. There is an ethical debate to be had about whether, knowing all that we now know, one could kill baby Hitler. The real challenge, however, is that such opportunities never exist. Even if one didn’t kill baby Hitler in the magazine’s scenario, one would at least know who Adolf Hitler was and what he would become from the start. That’s useful knowledge. Secret Hitler uses the weight of that knowledge to make the challenge of unearthing Hitler more urgent.

Secret Hitler strikes a difficult balance. It is not deliberately unfunny or consciously weighty in the manner of a History Channel documentary, but it is not mining its source material for laughs. The game’s Kickstarter video shows players laughing, because that is something people do when playing games. It’s human. It’s normal. Which is not to say that one cannot laugh about Hitler; Mel Brooks make a credible argument in the PBS documentary Recording ‘The Producers’ that jokes were his only way of striking back against Hitler. But for every clever joke on this—or, to a lesser extent, any—subject, there is plenty of dross to go around. Secret Hitler is interesting, joyful, and mercifully not going for cheap laughs.

You can support Secret Hitler’s development on Kickstarter.