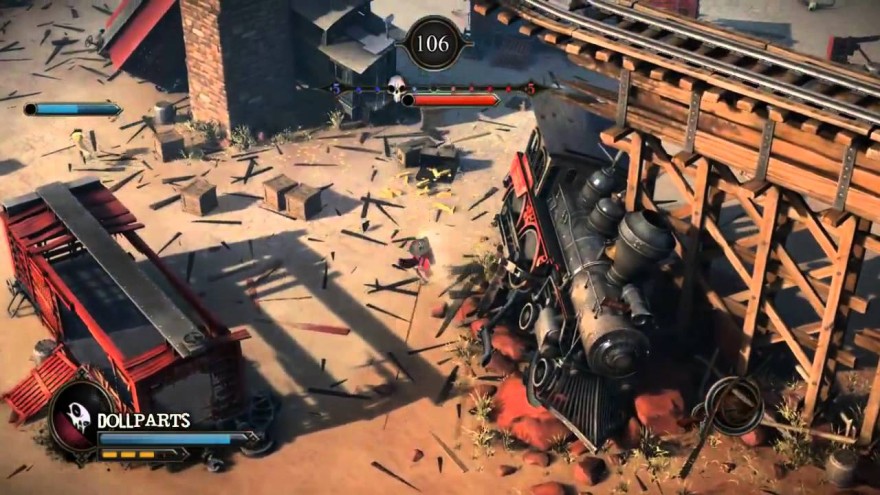 “They’re so cool to watch, but not so much fun to play,” says Yousuf Mapara of the western standoff. You know the type: Eastwood’s standing against a long flat horizon, eyes permanently squinted against the frontier sun. The camera’s tight against those eyes, searching. They give nothing away. Cut to his hand on a revolver grip.

His opponent’s eyes are wild, nervous. Eastwood again, grimacing. The other man pulls but Eastwood’s pistol is already up, up and firing, and the sadsack falls to the ground in dust and blood. Probably a lot of blood.

An isometric multiplayer shooter that pulls deep from the spaghetti western bottle.

So maybe it’s fun to write, too. But Mapara’s not shooting a film, or writing an action scene; he’s developing Secret Ponchos, an isometric multiplayer shooter that pulls deep from the spaghetti western bottle.

To Mapara, the spaghetti western is darker than the traditional western (such as the black hat/white hat morality of 1953’s Shane), with a “certain style” that the Secret Ponchos team is looking to evoke. Crucial to that style was the music of prolific composer Ennio Morricone, whose western scores Mapara describes as “eerie instrumentals complemented with tragic trumpets” that lent beauty and gravity to the films. This rush of films from the late 60s were more violent and auteur-led than most previous Westerns; the gaggle of them were called “spaghetti” westerns because of the surplus of Italian filmmakers working on them.

Sergio Leone’s Dollars Trilogy is the most recognizable of these films: A Fistful of Dollars (1964), For a Few Dollars More (1965), and The Good the Bad and the Ugly (1966). A close second is Django (1966), which is a little stranger: Django lugs around a coffin with a gatling gun inside. The final shootout sees him fanning a pistol with crushed fingers. The film spawned innumerable sequels, most of them completely unrelated. From there it’s a crapshoot, directors feeding off each other and themselves: The Beyond legend Lucio Fulci’s Four of the Apocalypse (1975) ups the brutality quotient considerably, as you’d expect.

And of course the actors: Clint Eastwood, Franco Nero, Eli Wallach, Lee Van Cleef. “Guys with their own interests,” Mapara says. To that end, Secret Ponchos features its own lineup of outlaws: the Killer, Kid Red, Phantom Poncho, the Deserter, and the Matador, with two more to be revealed.

My personal favorite is Phantom Poncho, a crimson-clad skeleton with a sick hat, a shotgun, and a bullwhip. He’s got flair—there’s a bit of Yoshitaka Amano’s baroque Vampire Hunter D in there, all tight squared-off shoulders and graceful lines.

The game has similar flair, even beyond the audiovisual. Mapara identified the spaghetti western’s tension, atmosphere, and standoffs as key signifiers of the genre. But instead of gracelessly pasting those things onto a game, he and the other developers at Switchblade Monkeys considered how to adapt them to an interactive medium.

”We realized the standoff in the game has to happen differently,” Mapara says. “Really what a standoff is about is that moment in the film when the two characters have everything on the line and then they meet. And we thought, okay, well that we can do. So we started playing with the idea of heavy consequences when two people meet.”

“The standoff in the game has to happen differently.”

This translated into a bounty system, where a player’s bounty rises or falls based on the arc of the match—but the loser’s bounty goes down, while the winner’s rises. Doing well makes you a more desirable target.

To Mapara, the key to the multiplayer is “understanding your opponent.” Every outlaw has specific moves that are executed fighting game-style with a combination of directions and buttons. Each of these moves has a recognizable tell, and can be countered by another character’s moves—“controlling range and timing,” as Mapara describes it.

It’s an unusual choice, drawn from real life: Mapara used to kickbox. “Whatever your opponent is doing you have to quickly process it and then make adaptations on the fly.”

That’s Secret Ponchos all over: it has the top-down perspective of Diablo or Dota 2. But it ducks those comparisons, playing like some hybrid of Street Fighter and Gauntlet. It weaves and bobs. You stare it down: it doesn’t blink.