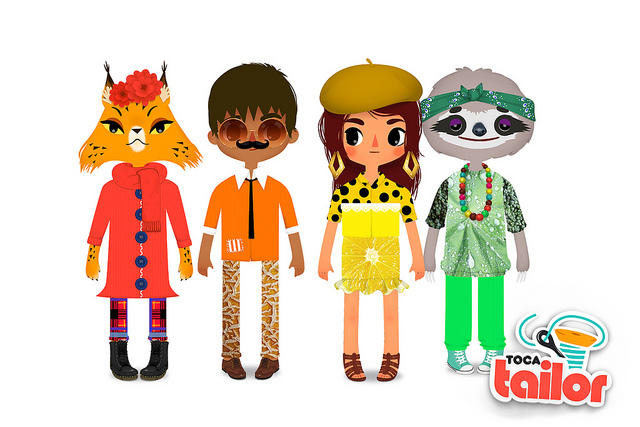 Parents everywhere know the quiet pain induced by watching your child tear open the wrapping paper on a new gift, toss the actual game aside, and play with the box instead. A kid’s imagination need not be confined to existing rules or points system; they’ll make those up themselves, thanks very much.

Swedish developer Toca Boca realized this truism and applied it to their eponymous brand of kids apps for smartphones. Instead of games with discrete goals and challenges, they developed interactive objects or bite-sized play environments, intuitive to pick up and play with as one would a physical toy.

Twenty million downloads later, the Toca Boca brand has much to teach us about designing for our niece and nephew.

Emil Overmar, one of Toca Boca’s co-founders along with Bjorn Jeffrey, never had videogames growing up. The few times he’d try, he was put off by the inherent competion of playing alongside others, and how the challege blocked off the rest of the experience. In an interview with Edge, Overmar remembers that feeling of disappointment:

All of the games were about: the more you play, the better you are. So your friend plays Super Mario for 45 minutes… You play for two and you die, then you hand back the controller. So I wasn’t that into gaming. Until I realised there were games that weren’t games.

One such non-game was Little Computer People, an early life simulation from 1985 released on Commodore 64, Apple II, and ZX Spectrum. A clear predecessor to such modern favorites as The Sims and even Animal Crossing, LCP had you managing a “little person” throughout his or her daily life. Players saw a cross-section of a three-story house with separate rooms and varying activites, from cooking to reading the paper to playing piano. But there was no flagpole to jump on, no boss to wipe out. Just a bevy of fun things to do, for the sake of doing them.

Their pleasure, or disgust, is your reward.

The interactive dollhouse mirrored how children play-act, pretending to be people they are not, from playing “house” to going grocery shopping for plastic slices of pizza. Overmar and Jeffrey have infused their own Toca Boca apps with a similar style of play, perfect for a child’s boundless creativity and desire to poke and prod.

To search for “Toca Boca” on the App Store is to be invited to play-time at a whimsical, enthusiastic kindgarten. From Toca Tailer to Toca Hair Salon, we see the same kind of interactive doll aspect as tested by Little Computer People nearly thirty years prior. Sip and chat at the Toca Tea Party; Make a mechanical friend in the Toca Robot Lab. Toca Kitchen might appear similar to Majesco’s popular Cooking Mama franchise, but the difference highlights the design philosophy of the Swedish team.

Mama boils down to mini-games to construct the best, tastiest meal, with points awarded and challenges unlocked. Kitchen merely gives you the ingredients and allows you to experiment, tossing this and that together as directed by your mood. Your diners–cartoon friends in the original, or furry monsters in a new updated version–react accordingly. Their pleasure, or disgust, is your reward.

Removing obstacles in videogames would be anathema to many designers. But any developer is necessarily past a certain age, when the best walls were those you built up from throwaway objects at hand. As adults we forget the joy in free expression divorced from rules. Those parents, uncles and aunts among us know: All kids need is a space in which to play and a few simple toys. They’ll do the rest.