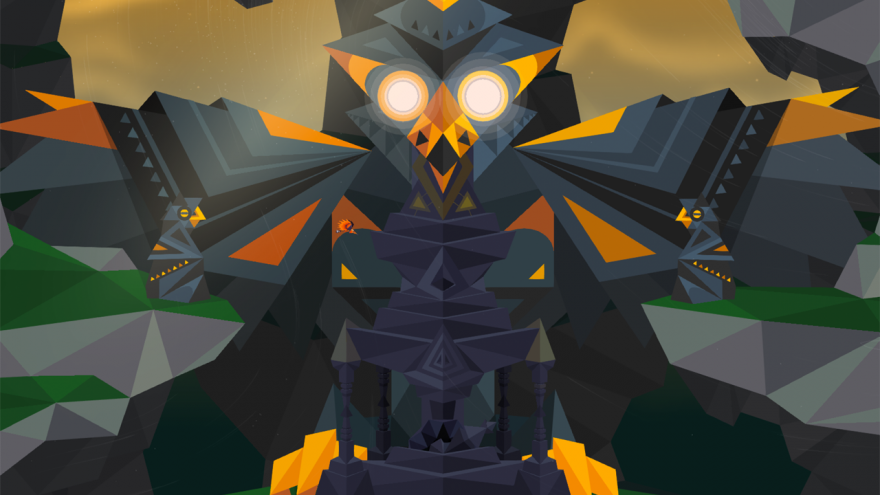 You may have seen games that look somewhat like Secrets of Raetikon before: you are a colorful thing flying through colorful space. But don’t be fooled upon first glance. The folks at Broken Rules, creators of the Wii U’s Chasing Aurora, are slowly constructing a series based in the European Alps, and, even without a few finishing touches (the game is currently in “early access” on Steam), Raetikon is already an extraordinary delve into flight, puzzle solving, rune deciphering, and the mysteries of ancient culture.

Light fragments litter the landscape, and the player maneuvers the character—a colorful orange bird who looks like he’s wearing sneakers—collecting the “silvers” to power ancient contraptions. Flora and fauna are crafted in origami-like cutouts, a smart aesthetic choice that spotlights the subtleties of Broken Rules’ hidden world. At points, I felt like an invader in the land, poking my beak around ancient ruins better left to rest. The papercraft style felt delicate, as a ruin might.

The environment is tight enough that you won’t get lost among the mountains and trees, yet vast and varied enough to keep you in a mode of exploration. Movement through this space is abstract, almost to the point of awkwardness; you attempt to flap rhythmically against gushing currents, stylizing what might be dubbed as “flightforming.” Rather than flying, it feels closer in feel to Ecco the Dolphin, a sort of swim through the sky. You can play Raetikon on a keyboard, but it’s on a controller that these rhythms make the most sense. A game built so deeply on the freedom of movement requires the precision of a joystick to be properly played.

Sound is key in Raetikon—gusts of wind create satisfying “wooshes” as you fly through the world, wooden wind chimes hang from trees, and shards jingle, hum, and resonate mystical tones on contact. Perhaps the most interesting aspect of Raetikon is the harmony with which the world reacts to itself. Sparrows dance with each other, knocking themselves into the wind chimes, lynxes hunt the stag, and the foxes sleep peacefully in their den. Like Proteus, the music is concordant with the environment; as the wind moves, so do light, tribal melodies. Each area is like a different piece of music, and you flow into the next like movements in a greater symphony.

Even so, as much as I died—over and over, in the earlier alpha—I eagerly retraced my steps to my place of death, recollected my light silvers Demon’s Souls-style, and tried again, because of the quiet, sublime pleasures of exploring this place. As you solve the puzzles, the world grows more reactive and characterful, as if by playing the game you were slowly awakening the ghosts of the ancient culture. Upon reaching the end of my patience, I’m treated with a flurry of new species, or the illustriously calming fox den, tugging at my curiosity to keep turning the next corner.

Raetikon’s mysteries culminate with a bit of mild decryption. Scattered among the world are headstones inscribed with an encoded language that reveal the story of an invisible “first culture.” Runes that decipher the alphabet are likewise spread across the mountaintops, but it might be most fun to see if you can decode it on your own. These sorts of collectables take on new meaning when they’re part of the story, not just cool hats or carrots to keep me playing. Much like the Renaissance-era Assassin’s Creed games, scavenger hunts reveal tiny bits about your character, why you might be there, and so on, triggering the player’s imagination and building the world inside your head.

It’s in this world that Secrets of Raetikon plays the long game. Broken Rules have created a title of masterful mystique, beauty, and playfulness, allowing you to explore like a child venturing alone into the woods, knowing that the dinner bell can always be rung to call you home.