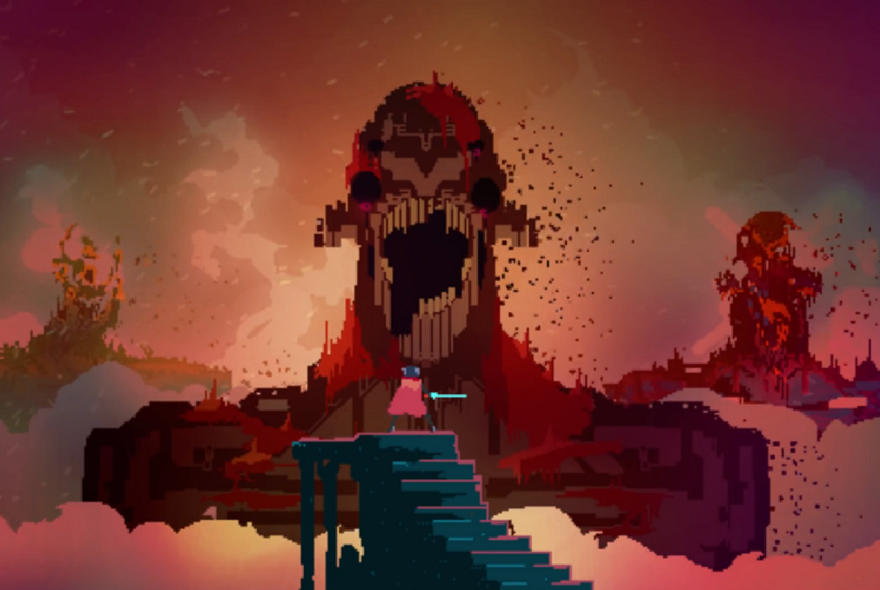 Mad Max: Fury Road (2015) wasn’t a tough sell. It had audiences entranced from its first trailer. A desert slashed with muted yellows and clay reds set against a crisp aquamarine sky spoke for itself. The dies irae of Giuseppe Verdi’s “Requiem” was only there to make sure you never forgot. The first trailer for Hyper Light Drifter was different in almost every way, but the effect was the same.

Alex Preston introduced his stylish action-RPG not with an apocalyptic bang but with the rhythmic chiptune meditations of a specialty Baths track. Grounded in Will Wiesenfeld’s introspective beat, Hyper Light Drifter wrapped its precious pixel art tendrils around every viewer’s grey matter until it held their imagination firmly in its grasp. Preston asked for a humble $27,000 for the game’s Kickstarter campaign, but ended up raising over 20 times that by its end. People saw Preston’s fluid and vibrant animations, they heard Wiesenfeld’s haunting melody, and it felt like coming home.

A new trailer announcing the game’s March 31st release on PC and Mac shows just how far the project has traveled since backers were first entranced by its audio-visual siren call in October 2013. Taking the sentiment of the original trailer and presenting it in a deeper, more polished light, this final reveal serves as an epilogue to the game’s development, gesturing with the forlorn ambling of its piano toward what awaits the player once they’ve completed a similar journey.

“It’s been an incredible adventure leading up to launch. I deeply appreciate everyone who has backed us, had faith in us, had patience through this process,” Preston wrote in the project’s most recent update. What started with just one person eventually grew into a full-time team of five, including essential contributions from Akash Thakkar who worked on the game’s sound and Rich Vreeland, better known as Disasterpeace, who composed the game’s music.

It’s the combination of these elements, pulsating electronic sounds fused with fluid pixel animations that helped Hyper Light Drifter flip a switch somewhere deep inside people’s souls. One that would prove to be hard to turn off, even after minor delays and worrying setbacks. Preston attributed this appeal to the game’s personal, idiosyncratic style, calling it more illustrative. “It is very much representative of the things I enjoy aesthetically,” he said.

“does this mean anything to you?”

He pointed to games like Superbrothers: Sword & Sworcery EP (2011) and Fez (2012) as inspiration, and it’s not hard to see Hyper Light Drifter as taking up the pixel art mantle and pushing it in a more cinematic direction. “That was something that I always loved from Street Fighter III (1997), when they actually had the memory and the power to produce that many frames per second and that many frames of handcrafted animation” he said.

But the animations lack substance without equally vibrant sound work, which is why Preston worked so closely with Thakkar. “Sound is just as important to me in games as the visual stuff is,” Preston said. “He’s kind of created his own aesthetic while leaning into things that I like, like in the old Metal Gear (1987) sound and Final Fantasy VI (1994). He mentioned the way Infinity Ward elevated the feel of first-person shooters by taking the same calculus of hit points and travel speeds and underlining them with sounds that felt like “chewing through metal.”

Hyper Light Drifter has looked to take the audio-visual aesthetic of the 8-bit and 16-bit eras that feels familiar and intimate to so many and elevate it in a similar way. Preston attributed this ineffable quality in the game to style. “That’s maybe an ambiguous or broad term, but there’s something about certain games, and I think our game too, that it knows what it wants to do and it executes on that in a way that people can see,” he said.

What the full effect of this vision would be is unclear, even to Preston. “I think as long as it resonate with somebody in a meaningful way, then that’s all I could really ask for,” he told me. “Whether they fucking hate the game, or they love it, and they love it for different reasons because everyone’s going to love and hate things for their very personal reasons, that’s great.”

The game’s three trailers are like mirrors in this way, drawing people for some singular reason despite always reflecting something different back. None of us know what we’re looking for in Hyper Light Drifter, but we all desperately hope we’re able to find it, whatever it turns out to be. “Making any kind of art or anything you put out there for people to consume, I think that’s all you can really ask for as the creator: does this mean anything to you?”