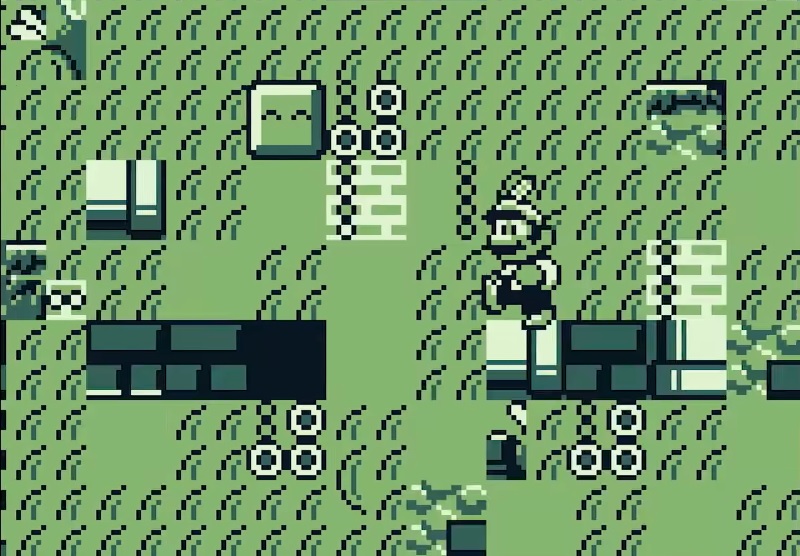 Games on cartridges in particular have pretty strict limitations on space. This means that there’s often a weirdness to the way their data files are organized, and speedrunners like the folks at the Awesome Games Done Quick event love to discover and exploit these in any way they can.

In a video posted on Tuesday, Chris Grant showed off one of these glitchy exploits to IGN’s Jose Otero. As it turns out, in the 1992 Game Boy game Super Mario Land 2: 6 Golden Coins, the data that determines how levels are shaped is right next to the data that does the rest of the stuff—memory, save games, and what have you—and both are printed on the screen in sprites.

This probably means that the creators of the game trusted that the ground and walls would keep players interacting only with the level they designed. In most games, this is the case, but every so often there appears one of those glitches that lets you fall through the world. Here, that glitch looks relatively easy to reproduce: if you drop through a specific pipe and quit the game as Mario moves from one area to the next, then when you reload the level, Mario’s position between areas will be preserved, but there’s nothing below him except code. Falling through the world means falling onto the sprites that represent the memory.

Often, a glitch like this that involves manipulating the memory of the game is too precise for people to pull off, and a Tool-Assisted Speedrun is used. In January this year, a team used a bot to inject code for a level editor into Super Mario All Stars (1993), and then fed Twitch chat into that, so viewers could design a level in this glitched-out nonsense world. As almost to be expected, the people in chat promptly broke the game.


But under the level in Super Mario Land 2, Grant can see right through the code, and knows all the precise, tiny movements and spots he needs to touch or jump through in order to fiddle with the game’s code. First, he moves gingerly through the game’s RAM to avoid crashing it or maybe even bricking the cartridge, and then he relaxes as he finds just the right blocks to break way down at the bottom of everything. After that, he can load up any level, and the game will show the end screen, which for speedrunners, counts as beating the game.

The Summer Games Done Quick event starts this weekend, and I’m sure we’ll see all sorts of weird and fascinating glitches exhibited and records broken, just like this one. For more information on that go here.