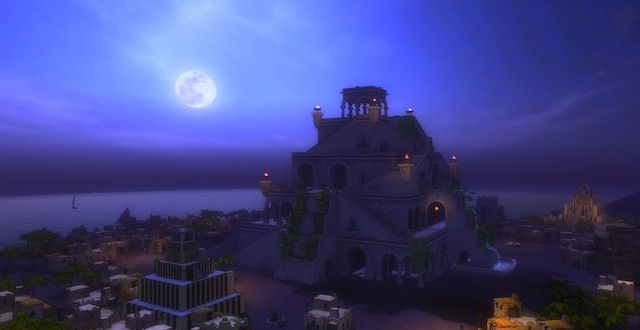 Now with Babel Rising—the new arcade God available to download on your home console—your child could be a zealous atheist by age 10!

But in all unmarketable seriousness—before I get to how a game could hold this much influence over a kid, I should say that I’m a product of the don’t-push-it-on-them approach to parenting religion. But several times when I was about 10, a little girl on the playground of my Kansas school would come at me with the are-you-in-or-out advance: Did I believe?

The question came in a great hollow wind, so I shrugged. I didn’t know who she meant.

On the one hand, I was religiously abstinent to any dogma that someone or something could possibly push on me. But on the other, I quarantined all religion into a great theater where people played with and played as God. Here, Babel Rising becomes a violent sideshow.

So if I were a kid on that playground now—a kid who had played Babel Rising—the Question would come across much worse than hollow, ambiguous, or just something that you could shrug off. Babel Rising’s explosive mockery of general higher-power temperaments renders the Question aggressively absurd. (Who would believe in this?) If I were that kid who played and loved Babel Rising, my laughter at Him and His followrs would flood harder than any story I heard on my couple of dates in church. The great question of Belief (Who’s there?) would be an embarrassingly banal knock-knock joke.

But so is Babel Rising, which asks you to take on His role and utterly annihilate one of the first civilizations. It’s the latest one-liner cut from a tradition of philosophy and logic that seeks to demystify the condition and correct usage of the Word: That he’s Dead, that he’s a Delusion, that he’s a Particle: all relatively diluted, if vastly misunderstood, quips that make up Babel Rising’s tonal lineage.

That said, it’s also one of the few games that manages, somehow, to collide this genre with an apocryphal story. But forget land-building to protect tribes of humans from the forces of nature, like in From Dust. Forget the double-edged responsibility of maintaining your omnipotence over the city and its populace of avatars in the SimCity series. And don’t expect to balance your honor with your desirability like in the anthropomorphic phantasm of Black & White. In Babel Rising you’re just perpetually angry, moving your crosshair or handheld over hordes of workers and priests, killing them with the powers of fire, earth, and weather. For the entirety of the game, the humans build higher, vanishing into the scaffolding, until you kill more of them with rocks and tornados, until the tower can’t be built. Play amounts but to a tantrum.

But the real powerful thing about Babel Rising is its presumption that the player should get the Joke rather than ask the Question.

Of course, Babel Rising never mentions the name of the role you play, ostensibly because the developers didn’t want to offend anyone. Nonetheless the game’s murderous rules, which come on a tablet of caps-lock fury, parody the Commandments. The distance between Heaven and Earth as big as the ironic distance that expands between you and your television screen.

—HERE COME THE ONES RESPONSIBLE FOR ALL OF THIS. THIS CITY PRIESTS HAVE LOST THEIR FAITH AND ARE ACTING FOR THEIR OWN MOTIVES. WE MUST STOP THEM!

—KING NABU WANTS TO HUMILIATE THE HEAVENS WITH THE BEAUTY OF HIS HANGING GARDENS. LET THIS BLASPHEMY BE HIS LAST.

Why? Because human ingenuity is the ultimate challenge to Your rule?

As told in Genesis, Babel, or Babylon, is the first city that appears after the great flood. Its people, fearing further disparity, strive to build a blanket civilization—everyone the same. Some modern reader might say the Babylonians were the first fascists. So if Babel Rising followed, you would fear the civilization’s potential hegemony and eradication of other cultures. The goal of the game would be to confound their speech, create diversity, and scatter humanity across the earth.

Instead, Babel Rising’s dull distortion of the story is simply that humans’ unbridled ambition will always fail to reach heaven, i.e., cities are bound to crumble; towers will always fall. But look at any major annotated Bible or ask any good priestly or Yahwistic source and they will tell you that the story is not about the origin of human pride—it’s about a city turning against itself when its people diversify, alienating each other by language. The tower isn’t even destroyed in the Genesis story, they just abandoned it (like how I abandoned the game). Only in the Book of Jubilees does the tower suffer the wrath of weather. Taught well, the story that calls for you to believe that human diversity is necessary and even sacred—something to be worshipped.

True, a bastardized apocryphal story comes as no surprise in any medium that can be consumed and disposed in an hour. But the real powerful thing about Babel Rising is its presumption that the player should get the Joke rather than ask the Question. The player’s faith, in other words is at best archaic, and at worst somehow devolved.

All those times I was on the playground wondering whether I believed beyond the shadow of reasonable doubt, I realize my ambiguity was being challenged, my vain longing cross-examined. Babel Rising is a skeptic’s provocation of disbelief that terrorizes you into laughing. But I’m still shrugging. Either that or I’m just still waiting to be let in on the joke—or the sermon.