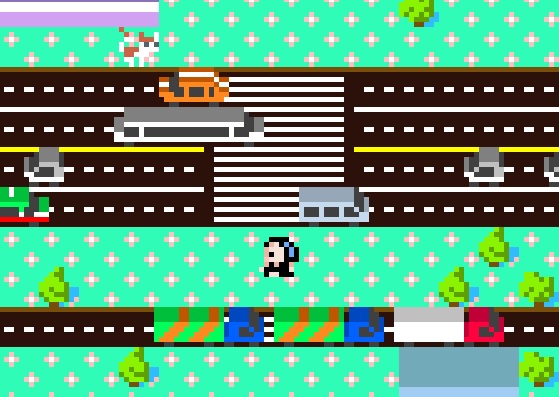 Despite being about “the experience and aftermath of getting hit by a car,” you’ll probably expect Anna Anthropy’s latest autobiographical game, titled Ohmygod Are You Alright?, to take the subject lightly at first. Get a little further into it, however, and you may understand why Anna says that “you could call it a survival horror.”

The game’s intro is upbeat. You’re told that you (that is, Anna) have just got back from hosting a New York gallery show that landed you some decent cash. It’s Wednesday, and as with every Wednesday, your friends are waiting to meet you at the pub by the lake. “You could get there in a minute on the bus,” the game’s text tells you. “But you’ve got time, and you’ve got money in the bank, and it’s a beautiful Oakland day. You decide to walk.”

we zoom right into Anna’s thoughts

A bright and cheery arcade game then opens over the black background to replace the text. A little pixel-art likeness of Anna says “LET’S GO!” in a speech bubble. And a small tune of no more than a few notes blips along in the background. This is, essentially, a game of Frogger in every way from the look, to its sounds, and especially its form. The big difference is that, instead of controlling a frog, you’re helping Anna to dodge the fast-moving traffic as she crosses a number of busy roads.

It’s a bit of a challenge as pixel-art Anna slips forward a little with the momentum of her run—which can mean you walk into the road accidentally—and the cars only blast their horn and never slow down if you appear in front of them. You have to be careful and panic at the right moments to avoid being hit. Nevertheless, it should keep you smiling with its cute presentation (including pixel-art cats!) and the relief you feel upon completing each screen.

But there’s a lot more to the game than that. This is about being hit by a car, right? Yes, eventually, you will get struck. The difficulty ramps up to the point that this becomes inevitable. At this moment, the game suddenly crashes into a corrupted smear of colors while a loud computer error blasts. This lasts only half a second but immediately jolts you out of the vibrant pleasure you were experiencing, and back into the black screen. The text returns.

From here, we zoom right into Anna’s thoughts as they arrive just before, during, and (for the majority of the time) after she is struck by the car. The car accident seems to dissect her life, opening up parts of it like a cross-section for her to analyze. She thinks about the immediacy of death, worries about having no insurance, as well as how she’ll be able to work and make money if she’s injured. It’s mostly financial troubles that seem to concern her.

a reaction to empathy games

This shifts upon arriving at the hospital. It’s here that some of the distress Anna endures due to being a trans woman bubbles up: her legal name and actual name are used interchangeably, and she is constantly misgendered. Anna offers levity during her distress through a mini-game that has you roll a number at random every time you encounter one of the hospital staff to see if you’ll be misgendered. It makes a point out of the absurdity of the situation.

As Ohmygod Are You Alright? offers some insight into a part of Anna’s struggles as a trans woman it might be called an “empathy game.” This is a term that has been used more frequently over the past few years and, importantly, especially in conjunction with Anna’s 2012 autobiographical game dys4ia. You might think that how dys4ia was celebrated by players and the press that Anna would be endearing towards the term “empathy game,” but that is not the case.

In fact, as Offworld points out, the gallery show that Anna gave in New York, before being hit by the car, included an installation called “empathy game.” It consisted of a pedometer and a pair of Anna’s old boots. The challenge was to walk a literal mile in Anna’s boots in order to score a point. Writing about it, Anna described it as a reaction to empathy games, “especially how privileged folks will use them as a kind of shortcut to allyship, using a game like dys4ia as a substitute for truly educating themselves on issues surrounding trans women’s lives and how to support them.”

The point of the installation was that you could walk a mile in Anna’s shoes and not learn anything about her experiences or how to actually help her or other trans women. The same goes for other personal games. And, as you learn by the end of Ohmygod Are You Alright?, despite the widespread championing dys4ia has received, it hasn’t helped much with Anna’s financial problems, nor her sense of loneliness and failure. She has reached many with her games but it seems not many have reached back.

You can purchase Ohmygod Are You Alright for $2 on itch.io.