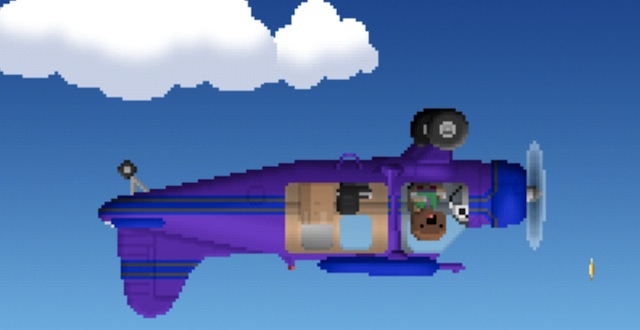 The independent developer NimbleBit released Pocket Planes on Apple devices last month to general snark and reluctant tapping. In a conversation about Pocket Planes the remark most often made is that Pocket Planes will get old.

“I mean. You know it’s going to get old. Eventually.”

“Like it’s fun until you realize it’s not really fun.”

“I was playing Pocket Planes every day until I started playing that new procedurally generated famine simulator with the electroacoustic soundtrack. Holy fuck.”

“This is not going to last.”

The paradox is that nothing inside Pocket Planes ever ages. You can leave a woman stranded on layover in Guangzhou and when you come back in five years she will still be standing in her slot, her idiotic eyes burrowing two blank pixels onto your touchscreen, waiting to be lifted over to Budapest. The aurora borealis will be fixed in the same arc over Reykjavik. Your dormant airline company won’t be in debt, and even when all the polar ice caps have melted in a century, the Earth in your pocket will be intact.

In this era the most meaningful play is thought to emerge from human-powered story engines like EVE Online, an online space opera whose players engage in market manipulation and real-life corporate theft; and Journey, a collaborative desert pilgrimage that plays like artistic speed dating. Meaning is hard-wrought in sandbox games like Minecraft, where it is laid brick by brick; and Spelunky, where it gets blown out of the earth (at great risk to your health). So I find the totally meaningless play of Pocket Planes refreshing. Its data sits merely suspended in a can, nothing but numbers.

To be sure, the game does create a meaningful fiction, but only since its images are figurative. You build an airline by loading planes with passengers and cargo and sending them to their destination cities, ideally making a profit. Depending on the virtual distance, the flights could take anywhere from one minute to several hours of real time. When the time has passed, planes back on the ground, you can start again.

The gameplay is a quick sequence of taps: 1) Tap a departure city on the world map; 2) tap the plane icon; 3) scroll through a list of departing people and cargo; 4) tap on them; 5) tap the flight icon; 6) tap a destination city; 7) tap the FLY! button.

NimbleBit’s little Bitizens don’t have the heart to explain the meaning of my life.

Pocket Planes might be mistaken for a productivity app. It’s filled with to-do lists that you never manage to empty. There is also the implication of money. You have to fund flights and buy new airports with gold coins. If you want the newest planes that carry the most and fly the fastest, you need to spend Bux, a rarer fare. The thing is that the same Bux let you instantly complete flights, doing away with the waiting game; and you can also exchange Bux for more coins. The sticking point for Pocket Planes detractors is that you can use real money to buy Bux. They just want you to spend money!!!!!11—you’ve been warned by the fair play brigade. But Pocket Planes clearly does not care how much money, coins, or Bux you have. You could run your airline into the ground with very poor decisions and the little people would still look at you the same way. Without judgment.

What the Bux really buy you is pause. What was so important that you couldn’t wait 20 minutes for Mary Jimenez to reach Istanbul? Moreover, why do you even need all of these new planes and airports if you’re fundamentally performing the same act regardless? The Bux throw your impatience as well as your boredom into sharp relief. Playing Pocket Planes, you might actually become disgusted with yourself. This is a good thing. Like in last year’s unforgiving Dark Souls, you can’t avoid examining your impulses and perhaps your guilt. You understand exactly what you are buying.

Although Nintendo sometimes implores you to take a break, the average videogame does not ever acknowledge the vast amount of time and attention it demands (whereas time and attention are the mechanical backbone of Pocket Planes). Perhaps this is why we’re compelled to justify afterward all that inordinate time and attention spent, not only with quantifiable things like achievement points, but also with meaningful observations and conclusions like

My cat died last week and climbing that mountaintop with the unnamed stranger in Journey has expressed something intangible and yet inarguably authentic about my relationship to other humans.

Are these really the feelings we think we’re paying for? Perhaps the issue is that wishful thinking, such as the notion that one is important or magical or smart or even interesting, or maybe Batman, still pulls a lot of weight in making videogame systems appealing to play with. These fantasies are as thin as the skintight costumes of Silver Age superheroes. The mouse click in Diablo III transforms you into a cool demon slayer, but also a vegetable with arms. The nature of videogames is that we are not currently able to decide which one matters more.

Yet nothing is compelling about running a fake airline—especially not when Pocket Planes is apathetic by design. There is no empowerment in tapping a name on a list. You might level up, but you don’t know what you are leveling toward. Articles about Pocket Planes tend to mention how the author was hoping to build some kind of towering enterprise (before that got old); but they naturally assume this is a game about ascending and feeling fantastic. The airline’s expansion goes outward, from Moscow to Glasgow to San Francisco, and life basically goes sideways.

In other words this is not a happy game, but a radically boring one. It should be telling that there is no music, but only the sound of sitting in an airplane: a dim roar of atmospheric pressure coursing outside an aluminum cabin pumped with compressed air. You can almost smell the reheated chicken breast.

Many people I know have abandoned Pocket Planes because it seems to go nowhere forever, and the dark joke of the game is that we spend forever taking fake people everywhere. For me, playing the game involves a feeling of resignation—to the hard rules of a built world, to the apparent lack of a better thing to do, to the knowledge that time will never move any faster or slower than it does. And you are certainly running toward nothing; and the program is running there with you.

You could run your airline into the ground with very poor decisions and the little people would still look at you the same way.

This is why I appreciate Pocket Planes. It is a series of entirely banal decisions with no special meaning. I took a person to one city and made some money. I took two packages to another city and made slightly less money. But the first trip took a little longer than the second one. These are merely results that differ from one another.

A few more insignificant decisions I made:

1) I bought an airport in New York for 51,000 coins and had to close it minutes later. The reason being that all of my planes were too small to fly across the Atlantic.

2) I replaced two of my two-seater planes with five-seaters. The five-seaters were less profitable than expected because they were more expensive to fly, so I replaced them with two more efficient three-seaters.

The reason I like deciding these things is because my choices come with no strings attached. I do not have to be orchestrating a story or a mechanical metaphor every time I happen to press a button. I don’t want to “tell” my own story, either. I’ve had it with this increasing assumption that the best play is about meaningfully exploring and experimenting with scenarios and variables and plans and shit, and not sulking on the couch with no particular interest and nothing better to do.

Pocket Planes is life-affirming in the sense that it makes me conscious of my own difficult mass, like reaching around to scratch a difficult spot, or having a hard time going to the bathroom. These are not things we imagine ourselves doing in a new videogame, because they are realities we would rather ignore. Nonetheless we always ask questions like: Why am I doing this? Why am I still here? What is it doing for me? What if I spend money? In Pocket Planes, these questions finally have no precise answers. We are always stuck trying to control a situation, and maybe it doesn’t exactly mean anything except that we happen to be stuck there.

NimbleBit’s little Bitizens don’t have the heart to explain the meaning of my life. The only things they do are shuffle back and forth, stare out of tiny eye sockets, and sometimes update their status on Bitbook. But once when I was tapping through my planes in the sky something remarkable happened. The plane was flying upside-down and sirens were going off and the pilot was silently screaming. When I tapped back the plane was flying normally again and the pilot’s scream had turned into a contented yawn. Nothing needed to be said.