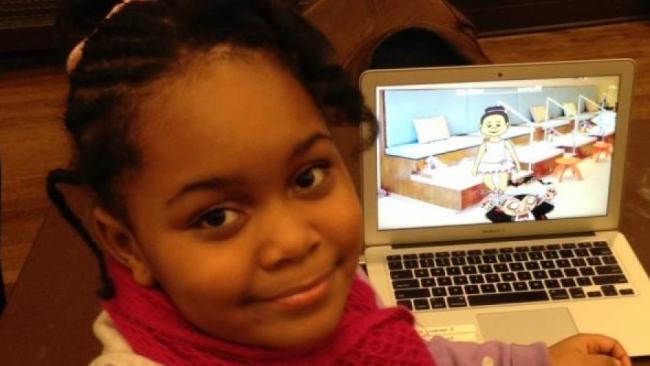 While #Objectify – a Twitter movement held to raise awareness of stereotypes women in the game industry need to deal with, by objectifying attractive men in the industry – has basically come and gone, and the conversation about women’s experiences in the industry continues across sectors, one event in the corner of Philly made it all look like child’s play.

During a January Bootstrap Expo at UPenn, seven-year-old Zora Ball (above) became one of the youngest people ever to program a complete game all by herself.

Ball has become the youngest individual to create a full version of a mobile application video game, which she unveiled last month in the University of Pennsylvania’s Bodek Lounge during the university’s “Bootstrap Expo.”

Seven-year-old Ball has also become a master of the Bootstrap programming language, and when asked, Ball was able to reconfigure her application on the fly using Bootstrap.

The last bit is especially important.

Apparently some grumpy olds were suspicious that her older brother was really the mastermind behind the program, but Zora showed them. When asked to reconfigure the app on the spot, Ball showed naysayers what was up when she executed the request perfectly. “We expect great things from Zora, as her older brother, Trace Ball, is a past STEM Scholar of the Year,” said Harambee Science Teacher Tariq Al-Nasir. No pressure, baby geniuses, but there’s an entire world for you to save. Please hurry.

For most people, a similar headline, something along the lines of “7 year-old becomes youngest person to program a game on their own” would conjure up an image of a little white boy – or perhaps an Asian boy. Most people wouldn’t immediatley imagine a girl, or specifically an African-American girl. This is precisely why the lack of diversity in the game industry is a bad thing.

If Zora here is able to do this at the tender age of seven, imagine the truly incredible things she can accomplish in the future. I sincerely hope that the game industry becomes a more inclusive place by the time she’s old enough to join the workforce – and that this obviously kick-ass kid still has an interest in it at that time.

In the meantime, I’d really love to play her game.