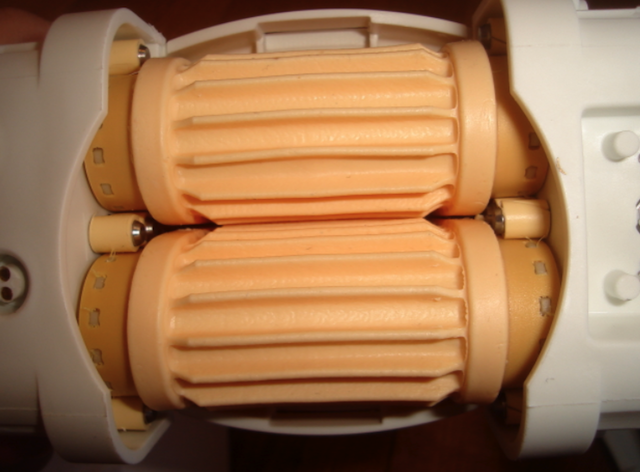 “You just stick it in a vacuum.”

The next day, I sat on the couch in my living room staring at my vacuum cleaner with sticky apprehension. Was this what guys did before they could meet girls?

Before I could continue that line of thought much further, my cat walked into the room and gave me a look that said, “you’re thinking about having sex with that vacuum cleaner, aren’t you?”

Flash forward several years. Instead of Middle School, I live in New York City. And instead of vacuum cleaners, there are now “fucking machines”, and they are referred to by the technologically-minded as teledildonics or cyberdildonics, depending on whom you ask.

The similarities between pornography and videogames have been endlessly discussed by critics and industry insiders alike. As I’ve argued before, many of these comparisons fall flat precisely because they ignore the social value that pornography can provide for many people.

The new sex tech, with its focus on user experience and device design, is the closest the experience of pornography has ever come to the actual haptic experience of gaming. Every gamer gets a basic course in industrial design – solicit gamer opinions on the first Xbox controller if you don’t believe me. In both cases, the feel of the device in one’s hands takes on a surpassing importance.

Scott Rinaldo is the product manager for the RealTouch, which is made by a company called the Adult Entertainment Broadcast Network. Rinaldo is a cheerful, vivacious man, and he is downright evangelical about his device. RealTouch, he says, created “that first virtual experience where someone could actually slide something on their penis, push play on a video, and everything they were watching was being transmitted to the device in real time—so as the guy in the video is penetrating in and out, in and out of whatever he’s penetrating, the device would also replicate those same exact motions.”

The initial idea for the RealTouch came from a man named Ramon Alarcon, who was working as an engineer for NASA.  “This guy introduced us  brought us a wooden prototype about six years ago,” Rinaldo says.

Rinaldo admits that RealTouch is still stuck in the outer fringes of the world of pornography. He accepts that the device is far too expensive ($330) for many, and simply verboten for others. But he’s hopeful that the RealTouch’s can become a sort of sexual luxury brand.

Rinaldo tells me that many people think RealTouch too ridiculous to believe, or too good to be true. But when I first saw the device, I thought something completely different. I thought it looked just like a videogame controller.

This is the future,” Rinaldo says. “It’s not some guy bending over some device, or the guy from Fast Times at Ridgemont High.”

Rinaldo chafes at the term “cyberdildonics” despite the future-sex philosophy of his company. At first I’m confused by this, so I ask him if they’ve ever considered more full-body toys like a sex doll.

“We’ve always felt that dolls…” he replies, pausing. Then, finally, he adds: “it’s a little perverted, a little weird. Look, I’ve been caught by my mom using the RealTouch device. She walked right into my house, right into my office. There I was, sitting in my chair, watching a scene. She literally had no idea what I was doing, because it’s hand free. Then she said ‘hey what’re you doing?! Don’t do that!’ And then I showed her this was my new product, this is what it does. And she turned around and said ‘that’s the coolest thing in the world…you’re actually not masturbating, you’re being serviced!’ And I said, ‘that’s what makes it so hip!’”

“This is the future,” Rinaldo says. “It’s not some guy bending over some device, or the guy from Fast Times at Ridgemont High.”

The development of advanced sex tech poses another question entirely: will haptic technology evolve beyond the physical limits of the human body to actually increase human pleasure, to replace human experience in the same way that gaming can?

Yet Imboden thinks phones are a bad comparison for his devices. In designing a phone, he says, the “constraints are a bit more contrived.” The ergonomics of button positions, the flat, rectangular shape of the device itself, are all taken as standard. Whenever phones pop up today with more complex features, facets, or unique shapes, he sees a lot of that as “just making a case for differentiation” in an increasingly crowded marketplace. Imboden gives a lot of credit to Apple’s innovations. But he is quick to point out that the iPhone is “not an ergonomic triumph.”

In the “realm of the body,” Imboden says, “there are a lot of real drivers.” For starters, every surface of his products is designed to come in contact with the body. And the “user experience” is, well, slightly different.

Imboden denies the claim that his toys ignore the shape of the human body. “We are celebrating the body,” he says. And his product “looks like what it needs to look like to do that,” instead of just looking like a disembodied penis Really, he says, sex toys “impinge more on human sexuality when they try to emulate it.”

You don’t have to look much further than the orgiastic bliss with which the internet views anything related to Apple to understand how much people have fallen in love with their devices.

Imboden doesn’t necessarily see this as a problem. The error people make when decrying the rise of the sex machines, he argues, is that “they assume the human body is the most effective means of creating pleasure or stimulation.” The penis, he says, was never “optimized for pleasure,” only procreation.

The diminutive size of the Form 2 and its amorphous design also helps make it non-threatening to men, Imboden adds.

Whether more advanced versions of toys like the Real Touch and the Form 2 augment or replace human sexual agency remains to be seen. Perhaps the stigma involved with buying a mechanical sex toy will never wear off. One thing, though, is for sure: for those people who want to move their sexual experiences beyond the flesh, there will be no lack of options.