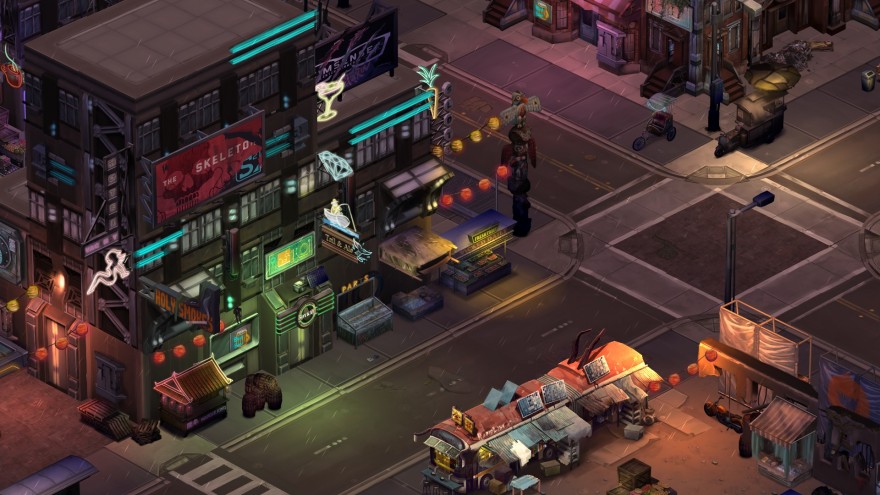 I come to games to believe, and I’ve found I can believe in nearly anything. I can get lost in the most ridiculous universe—an underwater hell with fire-breathing cyborg rabbits—if it’s rendered convincingly enough. And though I am usually swept away by some aspect of a game, I struggled hard to believe while playing through Shadowrun Returns, this year’s successor to 1993’s Shadowrun.

When the hairline cracks in the illusion show, you see the creator’s presence, his too-heavy hand, right outside the frame.

The Shadowrun world is a profane stew of genres: dystopian cyberspace littered with fantasy’s stock central cast: Orks, Trolls, Elves, Dwarves. Respects are paid to Ghost in the Shell, Series Experiments Lain, System Shock and Deus Ex. But the world’s existence depends most heavily on the black fire vision of William Gibson, author of Neuromancer, Count Zero, Pattern Recognition, and other seminal novels. Organ traders run a brisk business in the traffic of heart, liver and limb. Jake Armitage is here, along with deckers and street samurai with cybernetic arms, all working in the long shadow of megacorporations and their arcologies.

In the campaign, “Dead Man’s Switch,” I play a shadowrunner, a gun-for-hire in 2054 Seattle. My anti-hero’s mission is to solve the murder of a friend, Sam Watts. Of the archetypes offered, I can choose between a decker (hacker), a combat mage, a rigger, a physical adept, a street samurai or a shaman. I chose a decker, which means I have a chance to plug into the wired and skate along neon towers of data suspended in black space. This is Gibson all over. In Neuromancer, Henry Dorsett Case is a struggling mercenary hacker who would “jack into” cyberspace where his consciousness could fly through all the world’s data.

My nostalgia for old games is rooted in a singular longing: to reclaim a sensation of losing myself in a fictional world, a sensation comparable to Case’s dissolving into the worldwide network. (In cyberpunk, generally, the promise of hacking into cyberspace, the Wired, the Matrix, is that your body is left behind as your mind dissolves into the digital fluid of a million other minds, and your simulation dances in virtual reality. Gibson describes the transition as “mainlining,” and it is imagined as pleasurable, exactly like a drug.) Crucial to that feeling, then, as now, was the whole seamless illusion that I am in the story, that I am living in it, that I am made manifest in this new space. I believe in the illusion that I am the protagonist.

I was jolted out of any illusion of being part of the world of Shadowrun Returns in part because its artifice was so evident at each turn. The arbitrary cross-pollination of genres, the narrative busywork, the lukewarm writing: these barricades kept me from feeling psychically connected to the characters and from entering their complex universe. In a successful fictional world, the author is invisible. When the hairline cracks in the illusion show, you see the creator’s presence, his too-heavy hand, right outside the frame. He’s pulling the strings of his puppets on stage. The simulation breaks; I am left on the outside of the narrative, peering in.

At times it feels this world hasn’t decided what it really is about, opting instead to be about everything: urban malaise and the Trail of Tears and Big Brother and Gandalf and Mordor. There’s a sharp taste here of the Imaginationland trilogy in South Park, in which all the characters of the world’s fictions are dumped into a big open field for battle. At first, this mashing is fun and comes to hilarious effect. McKulsky, the ork police boss, is breathing down my neck. Hold up—I need to light up this dwarf. Hold up—there are some vaguely Hispanic gangbangers that I need to learn about. Hold up, hold up, hold up—I need to enter the vast world data network to read some hospital records and erase some security borgs. Jesus Christ! Here’s an elf trained in neuroprosthetics. Wait! Stay. I need to talk to my Native American shaman lady into raising some child spirits from the dead.

Why this mix, specifically? Why any of these choices?

The net result of all this fusion is confusion. Each time I halt at a new narrative element to think on its references to five other sources in wider culture, I am jolted out of the illusion that this world is internally consistent and self-contained. This frenetic circus does not hold aesthetically or narratively. In the same game I attend a Catholic funeral, avoid a Scientology-like cult, bust through gutterpunk junkies lost in neurochip drug dreams, watch an elf stripper-sway on stage like her close counterpart in Warcraft and haggle with a Korean lady-arms-dealer. I spend a lot of time talking to the madam of the Seamstresses’ Union, a thick-bodied woman named Kubota, who is not just Japanese, but Afro-Japanese. Why this mix, specifically? Why any of these choices?

It is muddled to its core; even its words don’t work together. Shadowrun Returns’ prose is a self-conscious mix of noir tropes, hardboiled detective jabber and lifted Sprawl lingo that reads like hastily-edited cyberpunk fan fiction. The resulting humor isn’t intentional:

Back in ’44 when I got captured by elves…

The troll does not seem fully of this world…

Her eyes suggest ‘Save me’ and ‘Take me’ in equal measure…

Bar décor is compared to an “aging starlet wearing too much makeup”; a meat puppet has “the face of a schoolgirl and body of a stripper.” There are glints of beauty: places smell like “death and bleach” or are filled with “cordite, radioactive dust.” But just as in the pen and paper Shadowrun game, the player’s imagination must do the heavy lifting here, fleshing out characters based on NPC portraits and story outlines.

After pretending to be a character in Neuromancer for hours, I trotted out a dog-eared copy of the book. I found an early passage in which poor Case longs for cyberspace, which he’s unable to connect to anymore:

A year here and he stilled dreamed of cyberspace, hope fading nightly. All the speed he took, all the turns he’d taken and the corners he’d cut in Night City, and still he’d see the matrix in his sleep, right lattices of logic unfolding across that colorless void… The Sprawl was a long strange way home over the Pacific now, and he was no console man, no cyberspace cowboy. Just another hustler, trying to make it through. But the dreams came on in the Japanese night like livewire voodoo, and he’d cry for it, cry in his sleep, and wake alone in the dark curled in his capsule in some coffin hotel, his hands clawed into the bedslab, temperfoam bunched between his fingers, trying to reach the console that wasn’t there.

Like Case, I want to separate from my meat self, my meat world, and feel joy by sinking into the cyber ice dream. Our games are our cyber ice dreams, and when a game constantly boots us off of the network, we feel distinct agony. Gibson’s artistic triumph was in making a future world that was wholly original, seamless and coherent. We enter his future and never doubt its possibility, its beauty, its utter reality. It is so real that it is already past.