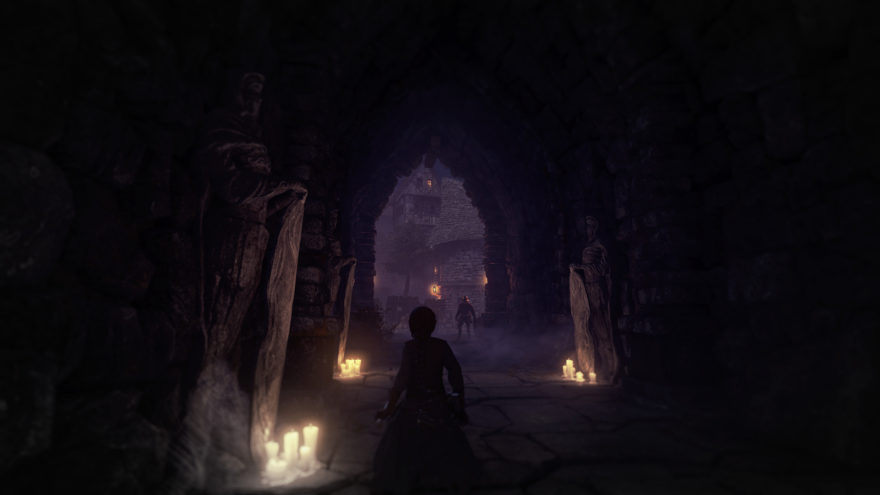 Playing a stealth game is like dancing. Or, more accurately, it’s like the evolution of how you approach dancing over the course of your life. Starting out, you’re a junior high pubescent: every move is a little awkward and the rules of appropriate conduct somehow seem both unclear and inviolate. You accidentally put your body in the wrong place and a whole goddamn army of humiliation descends upon you. Then the game progresses, and you’re in high school: you’re starting to get the hang of things, in terms of physically navigating the environment but also in appreciating that while there are indeed hard-and-fast rules, there is also room for you to express yourself and approach the task at hand in a creative, idiosyncratic fashion.

Finally you’re a grown-ass adult, drunk at a friend’s wedding: the stakes are high, you’re brimming with confidence, and you want to show off what you can do. If you pull this off, you’re the life of the party. If you make a fool of yourself, then the newlywed couple and their respective families will roll their eyes every time they think of you for the rest of their lives. This progression is essential to a genre defined by avoiding being noticed through the performance of increasingly audacious acts in the shadows. If a stealth game is excessively punitive in how it manages its hiding mechanics, it can keep you trapped in middle school; you’re eternally embarrassed by hypervigilant chaperones, shouting out things like, “How the hell did that guard see me through the wall?”, before throwing the controller down in a rage. A crime of equal measure is allowing you to become complacent in your adroitness. Feeling like a ninja master in a game that does not scale itself up to match your skills is like being Matthew McConaughey’s character in Dazed and Confused (1993): a dude who was cool in high school and keeps hanging around because it’s easier than facing the real world. This is the mistake made by Shadwen, a stealth game with some interesting ideas that never quite makes the transition into adulthood.

The titular Shadwen is an assassin en route to kill the king. She comes across Lily, an orphan girl with nowhere in particular to go, and so, improbably, they decide to travel together. Shadwen has a grappling hook that allows her to access high places and yank objects from afar, and through the art of misdirecting patrolling guards she must clear a path for Lily as the two of them traverse a medieval city on their way to complete Shadwen’s dark business. Three important rules define how you navigate the levels of Shadwen. First, whenever you are not moving or taking some action, time stops. Whether you are at rest, mid-sneak, or mid-jump, the default state of the game is one of suspended animation in which you can move the camera around to scope out what’s what. This naturally slow pace is important because of the second rule, which is that if Shadwen is spotted, it is an instant Game Over. There is no health bar, no opportunity to escape and re-hide after being seen. This is not as brutal as it sounds, however, thanks to rule three: at any point you may rewind time, going as far back as the start of the level.

By giving you the ability to undo the junior high gaffes of missing a jump or hitting the wrong button, Shadwen eliminates the learning curve of a stealth title like Metal Gear Solid V (2015), which forces you to adapt to mistakes on the fly or else face having to restart an entire section of the game. The ability to reverse any misstep however small or large lends a tremendous amount of control, especially for a genre marked by being outnumbered and outgunned. The expected compensation would be for Shadwen to demand intense precision: if you can stop and rewind time, you better do it right. Unfortunately, Shadwen is not especially precise. A similar time-stopping mechanic felt essential in SUPERHOT, in which each footstep required consideration in order to weave through speeding bullets in balletic majesty. But the goofy guards and ample hiding places of Shadwen offer lots of room for error—even as the game allows you, if you want, to eradicate all error. But there’s no real reason to bother.

if you can stop and rewind time, you better do it right

The game never deviates from its initial configuration; though you grow faster and bolder, Shadwen neglects to throw any curveballs to challenge you. The boilerplate medieval world is only populated by two guard types (normal and armored), who are as clever in level one as level 15. The game is almost aggressive in its refusal to mature alongside you, even when such arrested development starts to appear absurd. The two designated hiding places for you and Lily are haystacks and shrubs, which make sense early on when you are on the outskirts of town, but less so when they continue to appear in abundance within the king’s high castle. Guards are often overhead speaking of their belief in “dark spirits,” an apparently universal superstition that explains why they are never unduly suspicious when a crate starts moving of its own volition (rather than taking the extra moment to realize that, in fact, it is attached to your grappling hook).

Lily, for her part, cannot do much, though she does have a preternatural sense of where guards are and in what direction they are facing. Whenever she has the opportunity to progress she does so autonomously, and though you have the ability to call her to your position (through some unexplained telepathy, as this is done silently and does not require line-of-sight), it is rarely needed. Again, the game opts to empower you by providing an intelligent and self-sufficient companion, but then fails to introduce new elements from level to level that might make the proceedings more interesting. For every time I got angry with Lily for not seizing the opportunity I created to slink from point A to point B, there were 10 instances in which she seemed to play the game wholly on her own, detecting the natural blind spots in guard patrol patterns and sneaking her way forward without my help.

Lily’s most important role is that of innocent spectator. Most stealth games pose the question of whether to kill or not to kill, with the implicit understanding that killing is easier; it permanently removes an enemy from the equation, and so going for a “no kill” playthrough is typically regarded as more challenging and requiring greater skill. Shadwen adds another layer to this: if Lily sees you murder someone, or indeed comes across a body at all, she is labeled as “horrified,” and the game invites you to rewind if you so choose. While doing so only seems to affect Shadwen’s brief and emotionally tepid ending, it is nevertheless an intriguing take on the “no kill” mentality, in which shielding a child from your heinous acts is equated with not committing them at all.

Lily’s most important role is that of innocent spectator

A stealth game that gives you the tools to be perfect is an exciting proposition—but only if it demands perfection in return, which is why Shadwen left me tantalized. There are a litany of issues that keep it from realizing its potential, from the game’s odd physics (a barrel can be swung around as though made of paper, but if it makes the slightest contact with a guard, it will kill him) and wonky AI, to the fundamental strangeness of your ability to manipulate time in the first place—a mechanic which has been satisfactorily explained by magic in Prince of Persia: Sands of Time (2003), or poetical metaphor in Braid (2008), but is offered sans logic here. With more time to flesh out the world and, most importantly, a more creative progression of challenges to match your skill, this could have been a special game. Instead, just as its titular character is trapped in time by default, Shadwen is a stealth game forever trapped in a state of adolescence.