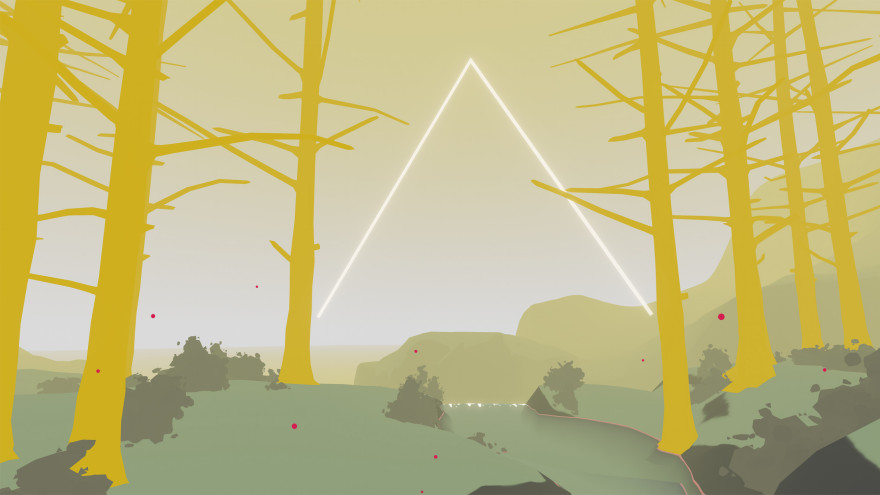 Shape of the World has a big hello. It’s a burgundy tree trunk hoisting itself from the ground, arching with the flexibility of a gymnast’s back, cracking like old bones as it pushes out bright blue leaves from its dry limbs. You can’t ignore a sight like that.

You are a lone wanderer in its beautiful world as it rushes to grow around you. It’s like nature is constantly rolling out a red carpet of its own making in front of you—come, move forwards, it invites. Your footsteps are translated into a rapidly-growing ecology of quiet lakes, rocks that dream of being obelisks, and bushes that pop. The more you wander the more you’ll find. “There are lush periods, desolate periods, storms and snowfall. Each ‘era’ has a recipe of colors, trees, ground cover, air particulate … and it is your travel that advances the time,” says the game’s creator Stuart Maxwell.

Being from Vancouver, Canada, Maxwell has been able to spend plenty of time walking through grand forests and along lapping shores. He’s especially fond of Stanley Park; a place where nature throws an impressive display curtained in green (like this and this). He loves Stanley Park as its enormity allows it a propensity for producing lost people. Maxwell willingly enters, zones out, and when he snaps back to full awareness finds that he’s somewhere unknown.

“I’m not sure how many people relate to this feeling, but I find pleasure in getting lost in a place I’m familiar with,” Maxwell said. “When you no longer know where you are or which way you’re facing, you get a little shot of adrenaline as your body searches to orient itself again. At the same time, you get the pleasure of discovering a new zone.”

He wants the players of Shape of the World to also feel this as they explore its biomes. This is why the flora dies as quickly as it grows. You can double back on yourself to find completely new trees, plants, and creatures. It’s an effort to disorient you while supplying eyefuls of wonder so that being lost is as rewarding as much as it might be confusing.

In this way, Shape of the World also draws attention to how ephemeral nature can be. Ed Key’s Proteus touched on this before with its journey through the seasons on a single island. But with the short life cycle of Shape of the World‘s environments, ever blossoming and ebbing, Maxwell further presses the bionomical angle. If you want to linger on a particularly striking terrestrial formation then you need only to stand still, but at some point you must accept that you have to move on, losing it forever.

“It is through our art that we endure the passing of time.”

Maxwell also directs players towards establishing a physical relationship with the wild outdoors by chasing ‘gates’ that appear as vast glowing pyramids in the sky from afar, shrinking with proximity. “[T]here are places spread through the world where the player can lay down some permanent landmarks in the form of something sculptural,” Maxwell said. “These are permanent, and you’ll watch them endure the eras. It is through our art that we endure the passing of time.”

Shape of the World is experiential in its directionless excursion and visual splendor, then. More idiomatic is its concern with how we, as a species, try to make our mark on the world. This desire of ours is born from our understanding of life’s brevity and death’s finality. We want to be remembered, to make an impact, and in Shape of the World we are given this chance while navigating a virtual world that perpetually reminds us of its thematic transience.

Shape of the World will be released in spring 2016. You can find out more about it on its website.