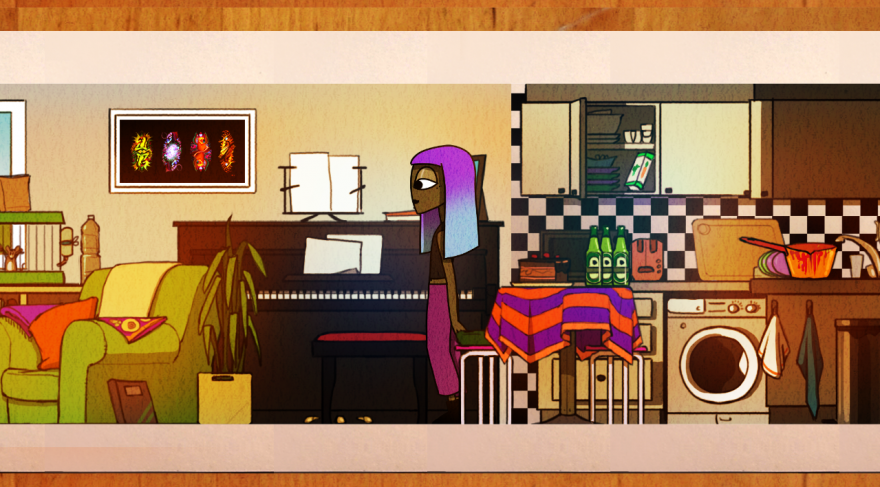 Female spaces are hard to come by in the videogame world. Of course, great women have been both creating and featured prominently in games for decades. But an entirely female-only environment—an environment touched by the many and multifaceted hands of a whole spectrum of the female existence—that’s hard hard to find, and invaluable when it is. She Might Think, along with a few other examples like Rachel Weil’s Femicom museum, creates that important but unfortunately rare atmosphere. A game focused on perception, it introduces the player to the intimate thoughts and opinions of six girls viewing the same apartment. Marion Esquian teamed up with her London-based best friend Ludivine Berthouloux to tackle the stereotyping of women for the A Game By Its Cover game jam. We chatted with Marion after her five day long release of the game, to get to know the great women behind the great virtual women of She Might Think.

You can play She Might Think for free on PC.

KS: Was there any particular experience or accumulation of experiences that really inspired you to create She Might Think?

ME: We wanted to do a game together for a long time, then I heard about. The concept behind the jam seemed awesome: an exhibition of fake Famicom cases made by a lot of artists which you can pick from and just be inspired by. They give you about two months to complete it. I chose this one. At first I really liked the art, then the description gave me the idea of putting different characters in the exact same situation.

we were awarded such a great wealth of different opinions

Why a game about gender stereotypes? As a girl and even as a French citizen (haha), I often suffer from being stereotyped. Sometimes, it’s just a joke and not that offensive. But other times, it’s a lot meaner. I’m not sure why, but a lot of people hate french players in online games. I know, crazy, right? Haha. And obviously, being a girl doesn’t mean you can’t like videogames or that you can’t have a motorbike or that your favorite color is pink. Your outward appearance, no matter what they are, don’t necessarily define you. That’s what I want to say with She Might Think.

KS: How do you hope interacting with these characters addresses the issues you identify in the game’s description? Have you gotten any feedback that shows it was successful?

Women in video games have always been represented in the same superficial way. If she’s not sexualized, she’s just a female version of a male character or a reward for the player. I never addressed this huge issue in my previous work before, because I was afraid I might not get it right. But doing a little experiment like this felt less daunting; to force players to meet different girls and see them all as different from each other, which in turn makes them more human. Since every character has the exact same possible actions, and we present each through short, competitive gameplay, our game invites a certain kind of comparison between the characters and how they think.

I was afraid people wouldn’t understand. But women and men played it and all the feedback so far has been really encouraging! Some girls even said they could relate to specific characters, which is really awesome to hear since girls don’t get to have that in many games. We also have some comments about how short the game is, and that people want a longer version or even a sequel.

KS: How did you pick the objects you used in the game? How did you curate the thoughts and opinions of the women you interviewed? Anything surprising about the process?

That process was so interesting! We had about 40 different answers, with a huge variety of opinions on each object. Sometimes they really surprised me, like when the girl who’s not feminine at all confessed that she had a lot of high heels shoes at home and really liked them. It was fun to read really different opinions on the same object. One girl would get all poetic about the musicality of a piano, another would just say that her neighbor is so annoying when he plays his. By choosing to directly ask women what they thought, we were awarded such a great wealth of different opinions.

What was most important to you while designing these characters? Not just in terms of their physical representation, but their personalities, theme music, etc.?

We wanted to create 6 really different characters that are unique on every level, including their score. The musics was created by Podington Bear. It’s all from the same album so there’s a common theme, but enough of a difference to allow for their individuality to really come through. Ludivine did an awesome job with each animation, allowing each girl to walk and interact with her own attitude. We also added 4 different expressions, so each character was shown with a range of reactions that encapsulate their personalities.

you could say my inspiration comes mostly from the tube

In Ludivine’s own words about the process: “The girls were inspired by several characters seen on animated tv shows, like Dexter’s Laboratory, Powerpuff Girls, Gumball. My aim wasn’t to draw something cute, but to draw something clear and simple, easy and funny. Since I live in London, I can see a lot of different styles on the street, especially people with colored hair. So you could say my inspiration comes mostly from the tube. I’ve always loved the traditional illustration way, that’s why I’m used to working with paper textures and sometimes watercolors for digital illustration.”

KS: Why did you decide to release a new character on a daily basis instead of all at once?

The idea behind that was to give all of the girls the same importance and attention. If someone wanted to play the game he/she would have no other choice but play with the unlocked characters and wait for the locked ones. That way, you can’t ignore a certain girl because you prefer the other ones.

KS: Is this really your apartment?

Unfortunately, it’s not our apartment! Ludivine says it’s her “dream apartment” with a whole room just for her art stuff. She had fun adding some easter eggs about our other projects (like that frame in the living room which is a card project by Ludivine, or the game on the laptop which is the first game I ever developed on my own.)

Also unfortunately, Mrs. Boris is fictional! And that’s a real shame, because we really like her too haha. We wanted to represent a sweet little grandma who loves everyone and is really kind. We gave her a walking stick to justify that she doesn’t follow you during the visit and just waits for you by the entrance. You can see the evolution of her character here.

KS: Which character do you identify or feel the most connected to?

Our character Lussi is actually Ludivine! Even if a lot of what she says is inspired by other women, it’s pretty similar to what she thinks and what she might say herself. As she’s my best friend, we’re pretty similar 🙂 I also really like Maggie because she has a lot of very strong opinions on things—and probably because she hates running just like me haha!

This interview has been edited for clarity and legth.