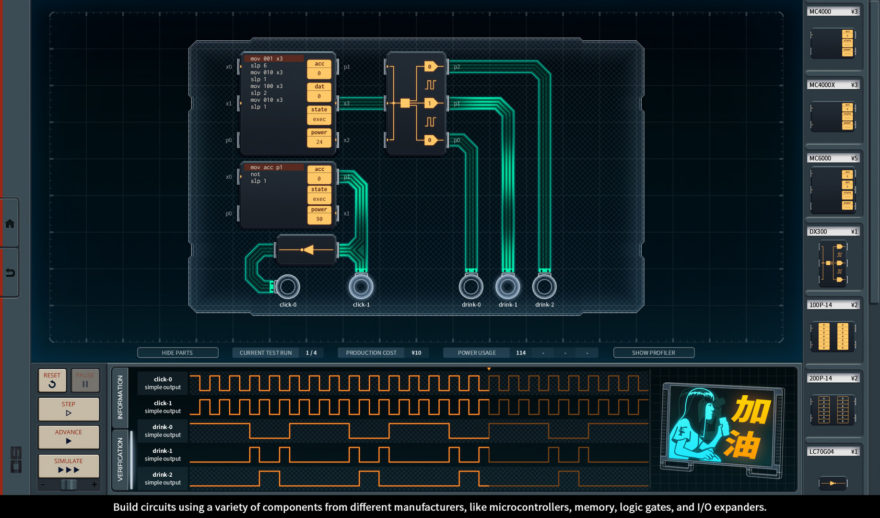 Those who’ve devoted their lives to the Cartasian Discipline in Neal Stephenson’s Anathem (2008) are subject to rote memorization when they’ve broken the rules of their society. The book in which they’re to memorize from is filled with illogical nonsense, like nursery rhymes that don’t quite rhyme—a particularly aggravating punishment for a group of people dedicated, simply, to the pursuit of knowledge.

“The way they punish them is by making them learn stuff that literally means nothing and is just making their lives harder,” Shenzhen I/O creator Zach Barth said. “I think of [Shenzhen I/O] in that way.” But, like, in a good way.

Shenzhen I/O is an engineering simulator of sorts; the player is a new employee of a Chinese electronics company—Shenzhen Longteng Electronics Co., Ltd.—located in the electronics capital of the world, Shenzhen. The company creates all sorts of stuff, from an electric sandwich maker marketed toward sandwich-loving Americans, to complex solutions for self-driving cars. Players just use a fake assembly language and make-believe circuits to do it. “We’re inventing these fictional systems that you can become an expert in, but none of it is transferable,” Barth said. “That’s the beauty of it.”


Barth and his team—which includes narrative designer Matthew Seiji Burns—went deep into creating this fictional world of consumer electronics, which is set in our world, just 10 years in the future. Much of what players create in-game drives Shenzhen I/O’s narrative forward. “The products that you build talk about the world that players live in,” Burns said. “One of the products is a pollution sensing window that automatically closes the window when the pollution is too high.”

The game comes with a manual, too; it’s more than just a tool to progress in the game, though. It’s part of the story, and supposed to mimic much of what it’s like to be an engineer. Filled with information from different sources, some of it “strategic bullshit,” Barth said, the manual is essential in playing Shenzhen I/O. Not only with what’s in there, but what’s not, too—again, just like if you actually were an engineer.