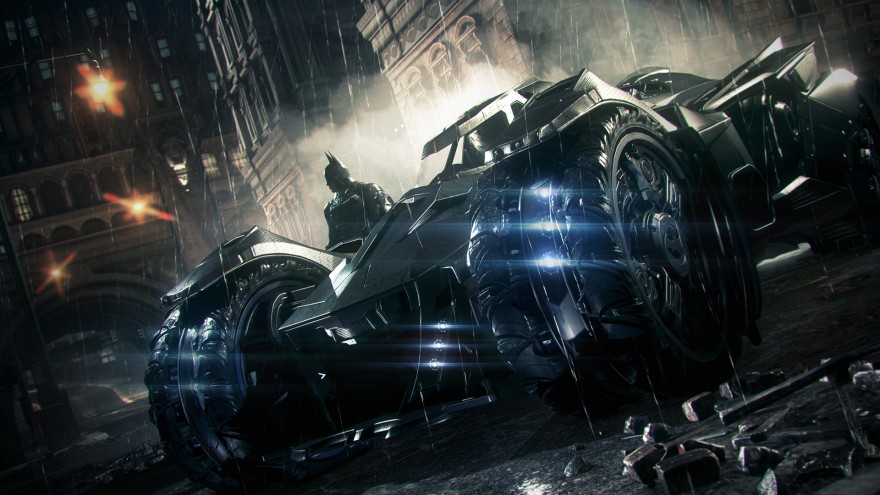 When Batman dons his new augmented armor in Arkham Knight, his entire suit interlocks. The robotic sounds of shifting plates accompany a camera that pans over the hero’s body, showing every single movable piece. Lucius Fox then explains in detail the various components that make up the new and improved Batsuit. This moment echoes the introduction of the Batmobile when it first roars into view. The camera sweeps over the sharp angles of the chassis and the intimidatingly massive wheels. When the car erupts into a tank, a computer-like voice describes the vehicle’s weapon systems. From these moments, Arkham Knight makes its central reading of Batman abundantly clear: in this world, the tech makes the man.

Lately, I’ve been wondering what it is about Batman that draws me to him more so than any other superhero. Granted, he has always been less interesting than the villains he fights, but the Dark Knight has started to leave me cold and bored. Perhaps it’s just general Batman oversaturation given that he has been the cultural favorite superhero since the late 80s/early 90s (though Marvel’s seemingly unlimited show of success may prove that he’s on his way out). Still, I find myself deeply suspicious of what contemporary pop culture sees as his human qualities.

For instance, I try not to roll my eyes when people say that Batman’s greatness stems from his “realism.” While he may be a mortal man among the gods of the D.C. universe, he makes up for physical vulnerabilities with hyper-preparedness and discipline, made possible through his collection of gadgets and his intensive training. His impossibly large arsenal and surplus of training time, however, could only be attained with the freedom of disposable income, which he has due to (seemingly) supernatural deep pockets. In other words, our respect for Batman’s discipline and clever use of advanced technology—aspects of his character that many identify as “realistic” or “human”—are uncomfortably bound to Bruce Wayne’s wealth.

That’s something that troubles me about Arkham Knight’s wild tech-fetishism. It must have taken the Rocksteady team an unfathomable amount of time to animate every one of the Batsuit’s and the Batmobile’s moving parts; it’s no wonder the camera leers over them with such intensity. In fact, the entire game, from Gotham City’s dank sewers to its neon-splattered gothic architecture, beats with a technological pulse, energizing every action for maximum impact. I could almost feel the developer showing me how much time and money they invested into the game as often as Batman keeps putting his increasingly complex array of gadgets to use.

The entire game beats with a technological pulse, energizing every action for maximum impact.

To be honest, I can hardly begrudge Rocksteady their showiness: when Arkham Knight works, it roars with mechanical efficiency. The combat remains as rhythmic and satisfying as ever, especially when Batman’s allies join the fight. Striking from the shadows to clear an area of enemies makes clever use of fear tactics and gadgets, providing maybe the most tactile Batman experience in the entire game. I even enjoyed the game’s fun but predictable story, though it unwisely sidelines characters Barbara Gordon and Catwoman for simple rescue segments in a drastic step back from their more active roles in the previous games. Scarecrow’s plot to plunge Gotham into a fear-induced hell is appropriately operatic (albeit unremarkable), and the return of Mark Hamill’s Joker as a specter who haunts Batman’s psyche is perhaps the story’s most welcome beat. It’s a shame, though, that most of the villains are reduced to side-mission extras, the most egregious example of which is the Riddler, with his borderline-obscene amount of hidden collectibles (all of which must be collected to access the game’s “true” ending) that provide only busywork instead of satisfying challenges.

The titular Arkham Knight, however, is the most disappointing villain, not merely because he is unnecessary but because he is emblematic of where the game loses what makes Batman interesting. His robotic armor and army of drones provide even more radical versions of Batman’s gadgetry, but his trained soldiers and paramilitary tech are as coldly mechanical as his function in the game. He seems keen to annoy Batman rather than to add genuine drama to the game’s plot. The allure of the Arkham Knight is the mystery of his actual identity, which is such a pointless ploy I could mistake it for a J.J. Abrams bit of mystery-box writing. His only defining quality outside of his fancy suit and weaponry is his pathological hatred of Batman, which is a quality he shares with nearly the entire rogues gallery. He, like much of the game, serves only to intensify the game through the most superficial, robotic (literally) means.

Batman responds disappointingly in kind, matching hi-tech weaponry with machines of his own—chief among them, the Batmobile. Like the Arkham Knight, the Batmobile is a shallow addition to the Arkham franchise, constantly trying to justify its own inclusion with contrived scenarios like Riddler-designed racetracks and tank combat against unmanned drones. To be sure, speeding through the streets in the Batmobile and then launching into a glide energizes the task of traversing Gotham, but when the game requires precise driving, the vehicle’s unwieldiness becomes a hindrance. Fighting off waves of unmanned drones (or, in even worse scenarios, stealthily disabling massive drone tanks) screams of a desperate need to feature the vehicle as much as possible, no matter how inorganically grafted to the core of the game it is.

And Arkham Knight is distressingly inorganic. Continuing the predictable trend the franchise, the game learns the wrong lessons from its predecessors. The claustrophobic corridors and decrepit houses of Arkham Asylum kept Batman caged within an almost oppressively cohesive environment meant to contain fractured characters, reflecting his own insecurities back at him. The city-sized prison in Arkham City attempted to recreate the same feeling on a larger scale at the expense of the previous game’s intimacy, but made up for its lack of structure with a generous engagement with  Batman’s famous villains. Arkham Knight, however, simply adds landmass and gadgetry instead of retaining the almost perfect pacing and logical limitations of Asylum or the more complex (or at least more entertaining) motivations of the villains in City.

Continuing the predictable trend of the franchise, the game learns the wrong lessons from its predecessors.

This concept is what troubles me most about Arkham Knight. Its changes to the Arkham template reveal a much more superficial understanding of what makes Batman such an interesting presence in the cultural canon. Arkham Knight’s obsession with Batman’s technology overshadows the rare moments that involve Batman’s complicated relationships with his allies, his pathological pursuit of a particularly brutal kind of justice, or his mythic significance to the people of Gotham. In a world that only values Batman for what can be added to him, either with new hi-tech weaponry or a much larger environment in which to fight, there’s no amount of introspection to distract us from the fact that Batman may just be a man with the right amount of time and money to transform himself into a hero.

So, clad in his shiny new cyber-armor, Batman descends on his city and hops into his vehicle, and I’d like to believe that there’s a substantive core underneath those mechanical interlocking plates. Arkham Knight, however, remains uninterested in this prospect, preferring to dwell on this new slate of tools rather than sharpening the dependable ones. Unfortunately, the game’s fascination with his devices provides a reading of Batman as shallow and flashy as the sheen on all those wonderful toys.