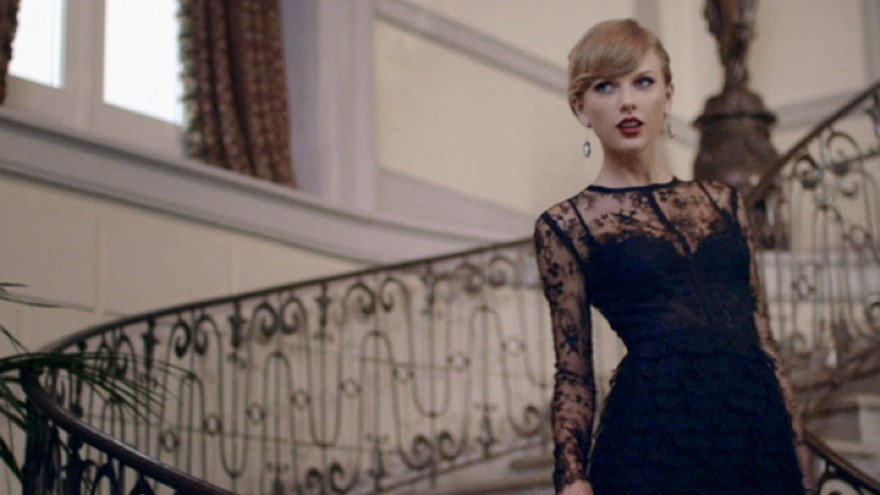 The warning signs are everywhere but I choose to ignore them. A book bearing the inscription My True Loves sits on a credenza. It is filled with passionate, handwritten lyrics: the sort of obsessive love stories that made Taylor Swift famous. On another credenza—all tables in this mansion beg to be called credenzas—there’s a picture of Taylor wielding an axe. Behind a curtain, a collection of portraits of ex-lovers have been defaced with red spray-paint. These clues—40 in all—abound but they don’t send me running. All these red flags make me want to spend more time playing the interactive version of Taylor Swift’s “Blank Space” music video.

Love isn’t a game and neither is this app: American Express bills it as the Taylor Swift Experience. The Taylor Swift Experience allows you to deviate from the story director Joseph Kahn tells in vision in the “Blank Space” video. The rooms in the mansion have been filmed with 360-degree cameras, leaving you free to choose between following Swift and her boyfriend as they act out a tempestuous romance or tilting your phone to pan away and explore the scenery. For as long as “Blank Space” plays (3:51), you can use your phone’s touchscreen to locate collectibles in the mansion’s rooms: pictures, lyrics, a diary. Beyond sharing the news on Facebook, there is no reward for collecting all of these totems, which is for the best since “Blank Space” is too short a song to leave you with enough time to find dozens of items. Multiple viewings would be needed to find all of the paintings and cat polaroids. The Taylor Swift Experience is an experience, to be sure, but it’s not one you ever really feel a part of; you experience its world in the third person perspective of a visitor. The Taylor Swift Experience most closely resembles the 360-degree room-to-room tours on high-end property sites. Aside from the couple fighting in the foyer, I’ve seen these scenes while searching for the Parisian apartment of my dreams.

The Taylor Swift Experience’s visual tic makes sense because the search for love is the same as the search for real estate. The real estate startup RealDirect, for example, uses surveys to find houses that are compatible with your desired lifestyle. The likes of eHarmony use the same methodology to find romantic partners. Both industries encourage you to assess whether potential additions to your life are compatible with your lifestyle aspirations. For instance, I dream of being able to stay home with my partner, bake brownies, and eat them while binge-watching The Honourable Woman. This dream is about real estate and love. It’s the story of an ad for either RealDirect or eHarmony. Yet the notion that romantic partners are akin to houses is anathema to traditionalists; Taylor Swift is criticized for having a long list of exes but nobody objects to her owning three homes. The Taylor Swift Experience subverts this criticism by applying the visual language of the property tour to Taylor Swift’s love life.

For most of her career, Taylor Swift has cast herself as a woman without (acquisitive) urges. “I’m Only Me When I’m With You” outsources all of her agency to a boyfriend; it’s the kind of love song only Mitt Romney could get behind. “Love Story” is Romeo and Juliet by way of Gone With The Wind. “Superman” is an ode to waiting at home for your man that makes the women in Marvel movies appear empowered. Even when Swift knows what she wants, as she does in “You Belong With Me,” she waits for the man to make the first move. Swift’s oeuvre is the story of a woman who regularly dates but never pursues.

Taylor Swift is criticized for having a long list of exes but nobody objects to her owning three homes.

The Taylor Swift Experience breaks with the lyrical and visual hallmarks of this canon. Our titular protagonist is no longer scared of men leaving or saddened by their departure. She admits to getting her kicks from the emotional roller coaster of a relationship. I know this because I was admiring the design of the mansion’s staircase as Swift’s suitor ran down its steps and towards the door. I had rotated my phone to pan away from the Taylor Swift Experience’s primary narrative but, as is the risk in this sort of non-linear experience, I suddenly found myself in the right place at the right time. The suitor made his way out the door. The walls remained standing and Swift remained unmoved. Life goes on.

“Blank Space” recasts a passionate, short-lived relationship as a conspiracy of equals. Swift is looking for excitement, handsome yet mercurial men, and drama. Her suitors, in turn, are looking to put further notches in their belts. Both parties know that these are not the preconditions for a stable relationship but throw caution to the wind. Swift knows what she wants from men and they know what to expect from her. In a world where Taylor Swift has devoted her career to chronicling her personal romantic tumult and sold over 25 million albums, how could suitor not know what to expect? Swift concedes this point on “Blank Space,” singing “Got a long list of ex-lovers. They’ll tell you I’m insane.”

If Taylor Swift were a man, her breakups would be mere footnotes. But she isn’t and they are not. The Taylor Swift Experience steers into the skid of sexist double standards: if the world insists on calling her a crazy, oversexed man-eater, she’ll show them what a crazy, oversexed man-eater looks like! “Blank Space” knows that “serial monogamist” is a loaded term that, particularly when applied to women, is fraught with negative connotations. The song attempts to repatriate the term as a badge of honour in the same way some feminists attempt to take the sting out of sexual slurs by reclaiming them as badges of honour.

“Blank Space” and the Taylor Swift Experience raise similar questions. Whereas the former asks why you would date Taylor Swift knowing that the relationship will quickly “go down in flames,” the latter asks why you’d download an app that allows you to collect items when there is no prize at the end of the line. To these questions, I’d answer that curiosity is a good enough reason, that an experience can be fulfilling even if it leads nowhere, and that being forewarned only makes you more likely to do something. At least that’s what I conclude while floating through the Taylor Swift Experience.

Does that mean I want to date Taylor Swift? I’d rather pan away from the action and continue admiring her mini-Versailles, but I can appreciate why the characters in the Taylor Swift Experience make the decisions they make. They’re looking for companionship and I’m looking for real estate. Anyways, as the Taylor Swift Experience winds to a close, another suitor arrives at the mansion’s door. The song cues up again. Taylor is doing just fine without me, so I go poke around the library.