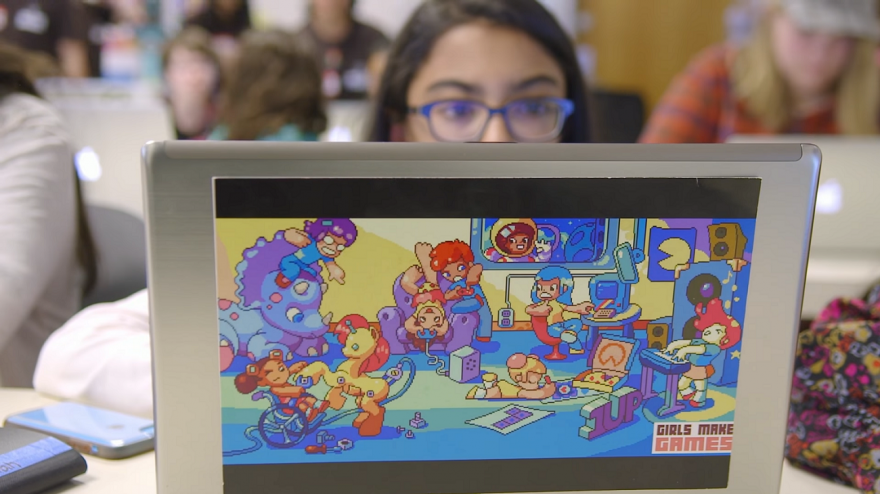 Shabir is the founder of Girls Make Games, a series of international summer camps put on by educational company LearnDistrict aimed at teaching girls the skills needed to make videogames. Camps were first introduced in the United States and later went global. Shabir discussed the organization in Girls Level Up, a recent short documentary made as part of Critical Path’s videogame culture documentary project. “It was interesting watching these American girls because they’re getting the same messages that I got as a girl growing up in the East,” Shabir said, “except the messages here are more subliminal.” Videogames are part of that.


Girls Level Up follows the girls making games during camp in Mountain View, California. But there are a lot more girls, Shabir said, that sign up for camp but drop out just before it starts: “They’re just so sure that they’re going to be bad at it because it feels like something girls don’t do.” There’s those subliminal messages again.

“At school, if there’s anything, any project that has to do with a PowerPoint or electronics, all the boys would take control over,” one camper in the documentary said. In many situations, it’s assumed that these girls wouldn’t even want access, let alone be given access, when there are others who’ve prematurely been deemed more qualified.

“I started out making games to help people learn,” Shabir said, “and now we’re helping people learn other things, like gaining confidence or just being better at whatever you’re doing, through game making.”

Shabir is confident that the videogame industry will progress because of Girls Make Games; we’ll start seeing its influence soon, she said. Girls Level Up is highlighting Shabir’s hopefulness about an accepting, diverse industry—a future where girls (and women!) don’t have to decide to live fearlessly. It’s a future where they just do.