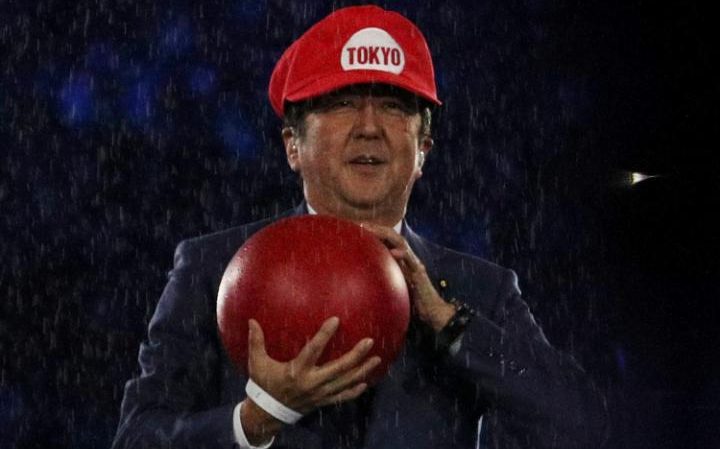 So at this point you likely saw what happened during the Olympics closing event. Yeah, I know. At first glance, it seems like an unnecessary commercial incursion in an already saturated Olympic event. Nintendo, a $42 billion-dollar videogame company, needs no additional exposure, especially of the heels of the success of Pokémon Go. This is an opportunity for Japan to shine a light on any number of different cultural contributions and instead, we get Shinzō Abe emerging from a warp pipe with Mario’s plumber cap. Don’t get me wrong—videogames are important, but truly important enough to be the key signifier for one of the oldest countries on the planet?

Aside from the simple fact that Mario is one of the most recognizable cultural icons, perhaps ever, Nintendo as a company has an over 100-year old tradition of creating play experiences dating back to its playing card company days in the late 19th century. Nintendo was there as Japan nearly doubled its population, grew in military dominance, lost World War II, and then emerged again as a commercial force in the 80s. For those growing up in the shadow of Japanese culture through videogames and anime, Nintendo is instrumental to my earliest understanding of what Japan is and continues to be, particularly as someone who’s never been there.

And it’s precisely that soft form of cultural influence that demonstrates why Nintendo is so valuable for introducing the 2020 Tokyo Games. Not only does Nintendo give a marketable and accessible touchstone, it’s part of a larger pattern of cultural export that many countries have pursued. For example, in an effort to rebuild their public image, South Korea engaged in “gastrodiplomacy” to engage the world through food. They set up the Kimchi Institute to see which type of pickled vegetables would appeal to foreign markets. According to the Institute’s director, Park Wan-soo, the production technique was tweaked for different taste profiles for the traditional dish, “so that when we export it to the United States, we can tone down the spiciness and sourness, and when exporting it to Japan, we can heighten the sweetness.”

Sweden engages in something similar, but only with music. Now the third largest music exporter in the world, the government’s Swedish Arts Council, statens kulturråd, gives generous support to music as a form of cultural expression. A 2004 Swedish-language study found that 30 percent of Swedish children go to publicly subsidized, after-school music programs. Max Martin—the magician behind “…Baby One More Time,” “Teenage Dream,” and “We Are Never Ever Getting Back Together”—is one such graduate of the program and has credited his success to the program. And, of course, there’s Stockholm-based Spotify that’s now one of the biggest platforms for the world’s music.

And back we are to Nintendo and the Olympics. If South Korean and Swedish pop music are a lens through which we experience their respective homes, it follows then that videogames are the Japanese equivalent, bringing joy to billions around the world, but in a uniquely Japanese way. Who knows—perhaps Mario Kart can sneak by the IOC as an official event.