My NES was a gift from an uncle we don’t speak to anymore. It counted, if I recall correctly, for two birthdays and one Christmas for both me and my brother. The SNES had come out a year or two prior, and so I knew that what I had was called an 8-bit system. The SNES was a 16-bit system; that’s what made it super. Any child who owned a SNES or a Sega Genesis had sufficient evidence in these two numbers—8 and 16—to prove that my Nintendo was a baby system for losers. The logic was irrefutable.

When Mortal Kombat came to home consoles, it felt like the final demonstration of my system’s inadequacy. Not only could the 16-bit systems display many more colors at much higher resolutions, they were capable of addressing concepts my little console couldn’t hope to handle: anguish, dismemberment, mortality, breasts. This might have broken my heart if it hadn’t been for the fact that actually playing Mortal Kombat made me feel like absolute garbage. It was a favorite of the kids whose parents let them watch movies like Nightmare on Elm Street too soon. The same boy who couldn’t stop telling me about the scene with “peopleroni” also couldn’t stop telling me about how Sub-Zero could freeze you and pull out your spine. He was obviously desperate to process what he’d seen. I hated him for telling me about those things.

As for me, I was playing Kirby’s Adventure, a late-generation NES game that quietly pushed the console to its limits. Kirby’s flashiest set piece is a golden tower called “the butter building,” which slowly rotates in a persuasive imitation of 3D rendering as the player traverses the level, but its deepest pleasures come from the way it carefully employs the NES’s painfully limited palette, using a mixture of stark and subtle contrasts to make each of the 54 available colors work to its maximum effect. Kirby is also a game about being a cute, pink puffball that eats cute monsters so he can become even cuter. I preferred my 8-bit system to the state of the art precisely because its limitations forced it to focus on the bright, joyful games I most wanted to play. In short, my tastes have always been what we now consider “retro,” but they’ve never had anything to do with nostalgia.

The same could be said for Shovel Knight. Though Yacht Club Games explicitly developed the game as a “love letter to 8 bits,” Shovel Knight proves almost shockingly bereft of nostalgia for the NES era. While its mechanics and presentation are a rich synthesis of the best games 8-bit had to offer, Shovel Knight is never slavish in its imitations, and never fails to borrow from modern design where modern design has the better idea.

At first glance, though, one could could mistake the game for its forebears. Most reputedly “retro” games do not in fact look retro; at least initially, Shovel Knight does. The character designs and environments perfectly capture the endearing vibe of the best Mega Man and Kirby games. But the resemblance gradually proves itself shallow. In its clarity, its detail, its loving art direction, and in its thrilling use of high-contrast colors, Shovel Knight is decades beyond 8- and 16-bit games alike. 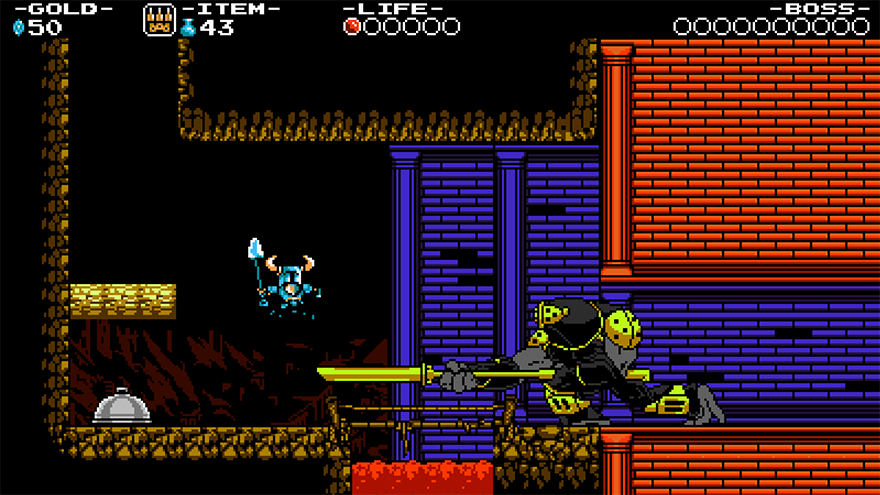 In a detailed Gamasutra article, Yacht Club Games programmer David D’Angelo identifies each of the colors the game adds to the original NES palette; there are four. Notably, one of these was a light brown used to ameliorate said palette’s lack of options for portraying characters of color. In playing the game, however, I was absolutely confident that many more colors had been added to the palette. As the article explains, this is mostly because more colors were allowed to appear onscreen at the same time: characters are allowed one or two more colors than sprites on the NES could accommodate, and different objects use completely different palettes while appearing simultaneously.

The payoff for these departures from tradition comes in levels like King Knight’s palace, where vivid, nearly garish golds, greens, pinks, and purples play against the cold blue of Shovel Knight’s armor to create single screens with the sort of personality and visual drama that series like Ninja Gaiden needed entire games to establish. A huge variety of enemies and NPCs populates Shovel Knight’s world as well, each one animated and colored in a way that establishes a personality. The cumulative effect is a game that is as bright, rich, and lovely as nostalgia would have us believe our favorite NES games always were.

The cumulative effect is a game that is as bright, rich, and lovely as nostalgia would have us believe our favorite NES games always were.

Shovel Knight’s visuals are so well-tuned because they hew to our collective memories of the NES where it serves the game to do so and nowhere else. This philosophy extends to the game’s guts. Shovel Knight is built around the hero’s mid-air plunging attack, which borrows its pogo-stick bounce from Capcom’s DuckTales and its addictive, elastic feel from the plunging attack in Zelda II: The Adventure of Link. Bouncing on enemies, environmental hazards, and innocent bubbles allows Shovel Knight to reach out-of-the-way platforms and build combos, each bounce a tactile thrill. Your knight also gradually collects magic relics that function like the best weapons and power-ups from the Mega Man and Castlevania series, borrowing from these classic design vocabularies to allow players multiple approaches to most challenges. But for all that Shovel Knight is built on an advanced literacy in 8-bit gameplay, two of its most important mechanics are thoroughly modern.

First, the game imitates Dark Souls in its approach to death. In Shovel Knight, you can’t run out of lives. Your incentive to avoid death is financial: each time you die, you leave behind a percentage of your wealth. You can recover the money if you’re willing to risk returning to the scene of your death. Often this is easily accomplished, but of course one tends to die in dangerous places, and it’s easy to spiral, throwing good money after bad. Secondly, while each level has a carefully balanced number of checkpoints, players can choose to destroy most of them for more money, at the risk of losing daunting amounts of progress should they die. These two systems, combined with the fact that every upgrade in the game is optional, allow players to tune Shovel Knight’s difficulty to their liking. Its tight, puzzle-like platforming challenges and twitchy boss fights can be a healthy challenge or a genuine ordeal, depending on your preference.

Nostalgia has a poor reputation because it so often obscures what it embraces. In every aspect, from tiny design decisions (like the way enemies don’t respawn when you re-enter a room if doing so would result in their getting a cheap hit on you) to its broadest aesthetic elements, Shovel Knight evinces an absence of sentiment that would be chilling in any other kind of love letter. It uses what worked about the 8-bit generation and ruthlessly discards the rest.

All of which is why it disappoints me to see so many refer to Yacht Club Games’ debut game as a nostalgic experience. Players who receive it in this spirit will find much to love, but they will also be missing the point. We didn’t love the games we loved as children because we were weak, ignorant, or confused so much as we loved them because they were so frequently great. If we feel it necessary to regress to childhood in order to justify our love for these games because they were also sweet, colorful, and kind, then that should give us pause. The apparent ambition of games like Grand Theft Auto mask a cynicism and laziness that traces back to Mortal Kombat. I’ll take Kirby’s Adventure over both of them any day of the week. And Shovel Knight, too.