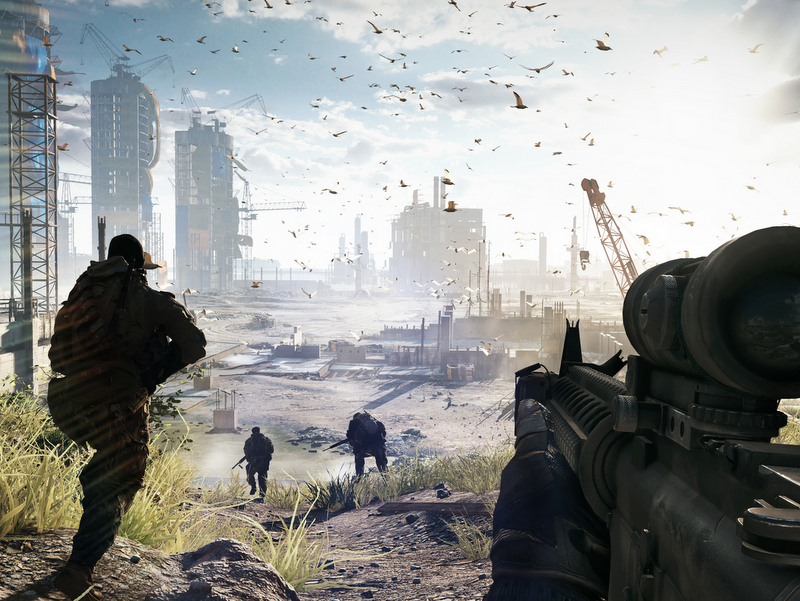 Thus sayeth Patrick Söderlund, executive VP of EA’s Games Label and one-half of dashing duo that graced the stage of Metreon last night. I was sitting towards the back of a movie theatre with a gaggle of other game journalists and apparently professional football players (!) who had lined up for the announcement of EA’s newest shooter Battlefield 4.

So would this statement ring true?

I find game announcements curious simply because we are being exhibited a release of an interactive experience and the “showing” of real gameplay footage at the Metreon in downtown San Francisco was no different. Not only was this a movie theatre, a place where linear, non-interactive experiences are shown, but producer Patrick Bach sat on-stage for the 20-minute play through as if he was a concert pianist prepping for a composition for the Philharmonic. I almost heard the woodwinds tuning in the background.

What ensued was twenty minutes of shooting and explosions and helicopters. Watch the trailer and gameplay footage (above) to get a sense of it. And for what it’s worth, I found the action, well, affecting. Perhaps it was that a cinematic experience like this was naturally filmic while at a movie theatre. Surprise, surprise. Part of it was the light effects and the sound and all the component parts of realism. But I merely shrugged. These things only really matter when I get to play.

One of your compatriots is down. His leg is pinned and you are tasked with amputating his limb. Grim stuff.

But there was one sequence that I found upsetting for the wrong reasons. (The clip is below.) But in summary, you are escaping with a piece of intelligence and a firefight with a helicopter collapses the building you have been climbing. One of your compatriots is down. His leg is pinned and you are tasked with amputating his limb. Grim stuff.

And so you do. But it’s not the cutting that’s worrisome. It’s what you see, or rather what you don’t see. For all the lip service paid to realism, and there was certainly a lot, it was this tense moment of sacrifice and decision that ultimately rung hollow. The sequence feels antiseptic and for all the viscerality that war is intended to evoke, the bloody stump post-incision struck me only as afterthought.

I kept thinking, “Why not linger on the leg?”

Kenneth Lonergan’s long-delayed feature Margaret deals with blood loss in a more profound way. A act of profound violence sets the stage for one of the most gut-wrenching descents into madness I’d seen on film, but it starts with an accident. When a confused teen (played by Anna Paquin) distracts a bus driver, she unintentionally causes an accident as a pedestrian is struck and dragged under the bus. Lonergan never shows you the carnage but instead walks you through by inference.

Crimson stains streak Paquin’s clothes, passersby groan in disgust, and the bloodied hands of those who attempt to help are the only signals that something terrifyingly real lingers off-screen. NPR’s David Edelstein said of the sequence, “I’ve never seen anything like it, and hope never to again.”

By contrast, Battlefield 4 shows you everything. But the pacing is hurried (you are escaping after all) and the interaction with your fallen comrade is no less intimate than another button press and a fleeting transaction.

For what it’s worth, Söderlund is completely right and EA has wisely positioned “emotion” as the centerpiece to separate Battlefield from the crowd. But unless EA is willing to show the costs of war, it will feel no more real than just a game.