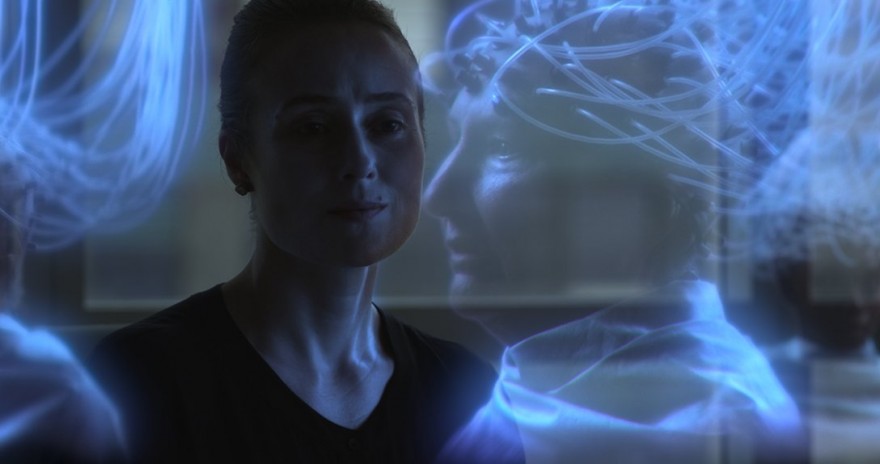 Jennifer Phang’s Advantageous is a small-scale feminist science fiction movie that couches pointed critique in a deftly-realized story. It’s a film about a woman who makes an irreversible decision for the good of her daughter, set against a backdrop of ambiguous terrorist conflict and entrenched sexism.

As the face of the Center for Advanced Health and Living, Gwen makes enough money to scrape by. But just barely. There’s no safety net in this society: a woman lives in the planters outside Gwen’s apartment building. It could easily be Gwen. When she’s fired to make way for a fresher face she has to pull something together. Without money, she can’t send her daughter Jules to prep school, which means she’ll never have the slightest chance at success. The social ladder is nonnegotiable.

Nothing is safe, not even the territory of one’s own body

The details of the film’s world are never more than hinted at: women are treated as commodities, to be swapped out for younger models, and bits of TV and radio exposition à la Children of Men suggest they’re on the cusp of being forced back into the home for the good of society. Why is an open question, though, and largely as unnecessary as Furiosa’s backstory would have been in Fury Road. Phang understands what’s crucial to her human-scale narrative and what can remain on the fringes. Abrupt explosions pepper the film, the work of some nebulous terrorist force. Drones fly overhead, able to surveill any and all personal conversations. Nothing is safe, not even the territory of one’s own body.

In a way, Advantageous is the inverse of the new generic Ryan Reynolds vehicle Self/less, which wades through the same subtextual waters while trying its damndest not to get wet. Gwen’s decision to have her consciousness transferred into another body is on the surface the same as Ben Kingsley’s decision in Self/less, but the former is entirely interested in the existential horror of the situation, while the latter is interested in … well, nothing at all, really, not even the gauche aesthetic director Tarsem Singh made his name on.

Phang’s technique is understated, but packs a punch, giving the film some of Claire Denis’s ripe sensuality. That’s not sexuality, but the French master’s gift for imbuing images with heady, tangible power: a flower floating in water, bare feet sinking into grass, golden light streaming between trees, or a stunning scene in which Gwen sits at her piano playing with raw emotion. As played by Jacqueline Kim, Gwen radiates warmth, which makes the film’s twist-of-sorts a real sucker-punch.

That twist pitches the film into a blacker place, for a stretch of queasy, powerful unease that Phang handles smartly. Instead of drifting into polemic, she maintains her intimate scope and ends the film on a note of hope.

“Can we accept a world in which [cosmetic] concerns occupy so much of our energies and potential for productivity?” Phang asked in an interview with the L Magazine. The film suggests we don’t have much of a choice. Like the best sci-fi, Advantageous refracts our present through a richly-imagined future, raising questions none of us have the answers to.