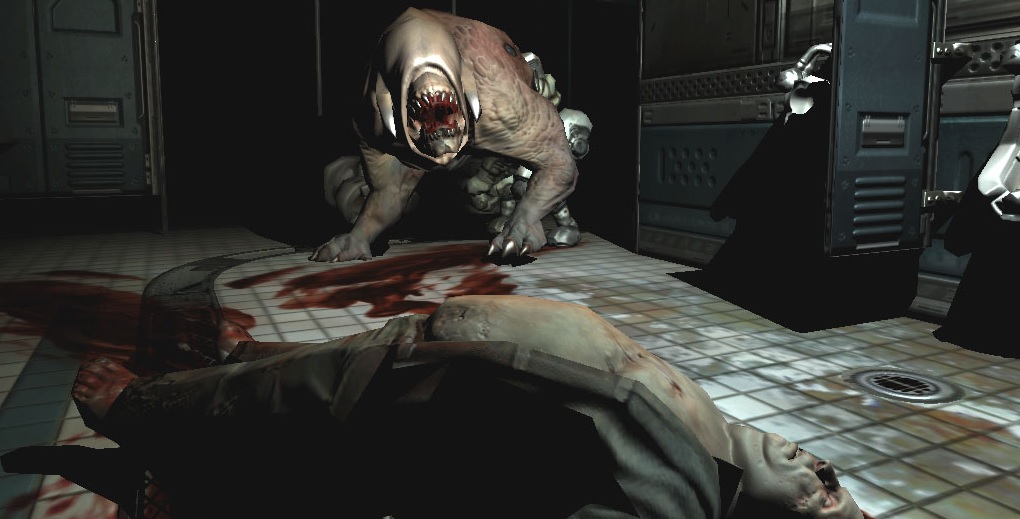 This article is part of a series called Shut Up, Videogames, in which critic Ed Smith invites games old and new to pipe down, or otherwise. In this edition, he looks at the most recent addition to the legendary first-person-shooter series, DOOM.

I know DOOM has a contingent of fans and critics who enjoy discussing it—its level structure, its weapon layouts, its enemy design—in excruciating detail. I know that, for some, a single room in id’s 1993 shooter can warrant microscopic inspection, lest the mathematical precision with which John Romero laid the game out go under-appreciated. I know what DOOM is supposed to be. In the wider sense of gaming history, I know, of course, what it represents. But it’s never seemed to me that intelligent. It’s a very smart game, years ahead of its time, and I love it to bits, but to approach it like some do, as if trying to decode the intricacies of a classical piano concerto, feels to me ignorant of one truth, absolutely undeniable: the levels in DOOM are a nightmare.

conceptually its level design is a mess

Reid McCarter and Patrick Lindsey co-authored a fantastic essay for this website about DOOM II, and how its level design echoes the Hell imagery of Hieronymus Bosch. “If god is order and the influence of Heaven one of words and law, then the antithesis of this is a Hell devoid of reason,” they write. “DOOM II‘s design compliments its minimalist plot in a fairly profound way, reflecting the influence of the underworld as a disordering of all logic.” In DOOM II, Romero’s chaotic level design finds a context—I agree entirely with McCarter and Lindsey that it suits the “Hell on Earth” narrative set-up. But where we differ is when they describe the original DOOM as “carefully laid out to encourage progression.” I find it just as vague, convoluted, and impenetrable as DOOM II. I find myself trawling impossible corridors and ludicrously-sized rooms, looking for a keycard, mechanism, or some kind of lateral floor or ceiling device that will move things forward, bored out of my skull. This idea that DOOM is deliberately and forensically mapped out to ease comprehension and create a sense of “flow” (to use awful, pseudo-game design jargon) baffles me. I enjoy the game a lot, but at no point do I feel like I’m experiencing the work of a master craftsman.

That goes triple for DOOM 3. Not just physically but conceptually its level design is a mess. It tries to be an expressionistic Hellscape, like DOOM II, but also a working military base, like Half-Life, and between those two aesthetics, gets completely lost. You have to be entirely soulless not to let videogames effectuate and perform. It takes a special type of joyless windbag to complain about games “not making sense,” or to point out plot holes and illogicalities—if you play a game like DOOM, and whinge about enemies jumping out at you, implausibly, from all directions, you’re likely missing the point. But the famed monster closet contrivance, whereby a section of a wall slides away to suddenly reveal an enemy hiding within, feels incredibly lazy in DOOM 3. Bear in mind that diaries, PDAs, and all manner of artefacts are scattered around the Mars base in an attempt to make it seem more plausible. Bear in mind that, presumably to emulate Half-Life (something the game does A LOT) and create a greater sense of place, DOOM 3 opens with a perambulation around the guard station, the cafeteria and the maintenance rooms—also bear in mind it’s maybe 20 minutes before you kill your first enemy. DOOM 3‘s designers try to create a sense of familiarity and mundaneness, but then dispatch you down unfeasibly long corridors, into rooms that seem to bear no practical purpose, to face monsters that are launched at you from thousands upon thousands of inexplicable hidden compartments.

The early Resident Evil games were a great combination of verisimilitude and visual abstraction. Manhunt, by Rockstar, mixed them well also, as did Metal Gear Solid. Real meets unreal is an aesthetic that plenty of videogame designers had pinned down before 2004. The makers of DOOM 3 however seem to lack imagination. Instead of embracing the context of this new, would-be-plausible environment, and having enemies spawn in different ways, they recycle the old tropes from DOOM. As a result, the Mars base is too haunted house and filled with booby-traps to feel credible. At the same time, the surrealism, expressionism, abstractness—however you want to term it—doesn’t come through—because monster closest and popcorn spawns are familiar videogame tricks. DOOM 3‘s attempt at weirdness feels entirely functional.

Plus, it ruins the gunfights. When enemies can appear at any time, in front, behind, or on the player’s flank, thinking and planning both become moot. What’s the point in considering your environment, moving tactically. or engaging mentally in any way when you can—and will—get jumped every second by teleporting enemies? You’re not looking to see where they’re coming from. You’re not choosing weapons best suited to a new situation. You’re not deciding which one to take first, second, third. You’re just reacting, on-the-spot, to a reflex test. It’s all physicality and no mentality—it’s the equivalent of working on a production line, pulling the same lever every ten seconds to pump jam into the donuts. Gunfights need context and stakes. These might be slightly fetishistic words to use, but shootouts ought to be choreographed and balletic. There needs to be a sense of where, what, and why, otherwise it’s just a bland game of whack-a-mole.

Presumably, nobody told the creators of DOOM 3, but it’s not enough to just dump baddies on screen and have people shoot them dead. The act of firing a virtual gun and killing a virtual thing, and watching its virtual guts fly out, isn’t worth a thing unless there’s context. And it doesn’t need to be a big, novelistic context. The creatures in DOOM 3 don’t need character profiles and soliloquies. You just need a sense of “I’m trying to get here, to do this, and these enemies are coming in from this direction to stop me, and this is why.” When the Covenant arrive in a dropship to prevent Master Chief from reaching Halo before them, that’s it—that’s enough. But DOOM 3 doesn’t even manage that. If the level design is a conflict between real and strange, the combat is stuck in a similar limbo, between believing that guns and blood and killing are fun by default, and refusing to budge on that incredibly reductive ideal.