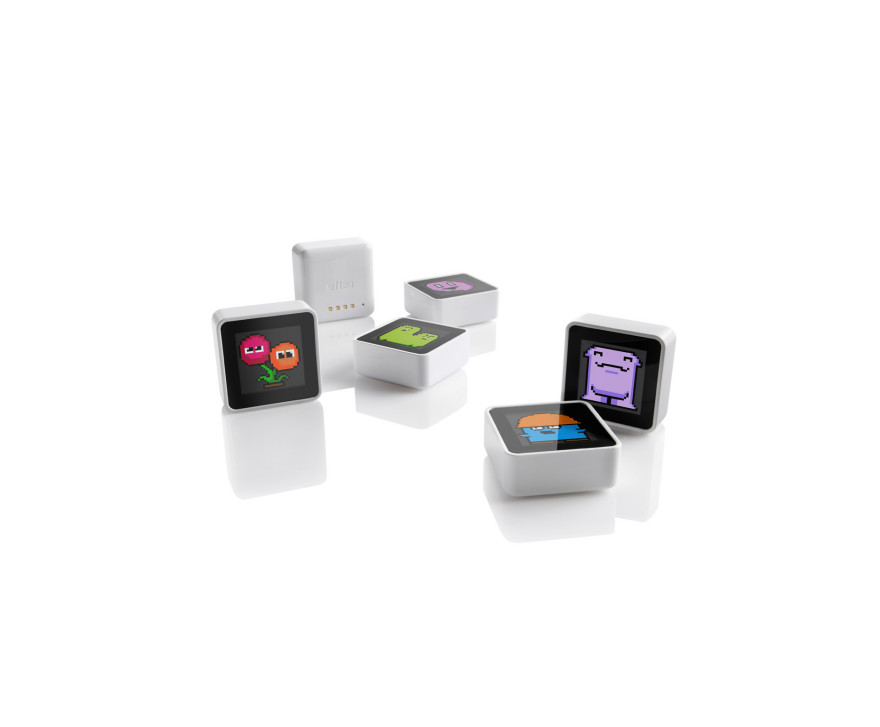 Change is afoot. Companies are shutting down. Consumer interest for electronic entertainment is spread across an historically wide platform of enticements. The pace of evolution is out-stripping our ability to make sense of where we’re headed, at what speed, and most importantly, why we’re heading in that direction in the first place. There’s murmurings of a new way: a single form that will give shape to our collective imaginations again; a playground for young and old, a tangible, safe, inclusive experience. It might not hit it big. But what if it does…

That was in the fall of 1985. After a peak of videogame interest and earnings in 1982, the market became swamped and fragmented. A population of newly-curious players had trouble sifting through the noise of copycat products and poor games; retailers slashed prices to clear shelf space. Major companies like Magnavox and Coleco shut down their games division. Bubbles popped with damnable frequency. Then Nintendo released the NES.

Nearly thirty years on, we find ourselves in similar roiling waters. Players once had two or three options to quell their videogame urges; that number is ballooning, with cheap PC games battling with cheaper mobile games, all undercutting traditional, full-priced console titles that are 1) tied to your television, and 2) printed on store-bought discs. While a full-out crash seems unlikely, a large-scale flattening feels imminent: a population spread so thin that no single company will capture the public’s imagination. Unless they give us something altogether new.

Enter Sifteo, a maker of interactive cubes combining the platform of a game system with the mobility and social fun of a board game, all cobbled together with homegrown technology.

Sifteo’s vision of the future is bound with its love of ideals. Co-founder David Merrill spoke to Kill Screen in the fall of 2011, before their first generation of cubes had been released. His favorite toys growing up were those “that felt like small precious objects.” The tone and tenor of the phrase echoes Steve Jobs speaking about early Apple products like the iPod, insisting on every material being white, even down to the screws. But where Jobs’ hoped to transform an already-existing market, Merrill and his company are trying to create one from the ground up.

At a time when monitors boast resolutions beyond what the human eye can process and games regularly take up over a gigabyte of space, Sifteo is backtracking into the past.

Physical and digital play has been merging for some time: you let your Tamagotchi “virtual” pet die in 1998; ten years later the App Store emerged, leading to the eventual paradox of a Cut the Rope board game: “the hands-on version of the touch-screen hit!” But Sifteo cubes are a blending of these worlds in a new way. The base package gives you three small blocks. You play the games on the blocks themselves, but interaction is dependant on their relation to each other: A simple puzzle game tasks you with matching colored gems, but instead of pressing a button or swiping a screen you physically pick up the necessary cubes, tilt them to “shake” the gems into position, then place them next to each other: the gems dissipate in your hand.

The objects themselves resemble thick Mahjong tiles or grooveless LEGO bricks. The form befits the function. Bernie Lin, Sifteo’s Directo of Production, told me they’re hoping to capture the same sense of wonder adult players felt during their childhood. In fact, Sifteo’s guts match the capabilities of systems we 20- and 30-something players loved in the eighties and nineties. At a time when monitors boast resolutions beyond what the human eye can process and games regularly take up over a gigabyte of space, Sifteo is backtracking into the past. With a purpose. 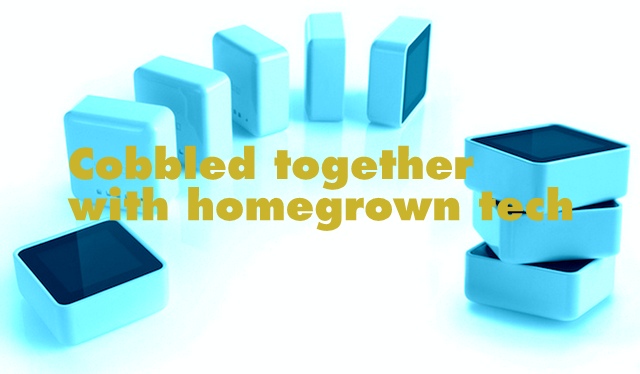 “We did design it intentionally,” Lin says. “[Sifteo] uses pixel art, 16-bit music, sprites.” These limits aren’t a disadvantage, but a constraint to solve creatively. “You can’t hide behind bad game design with good graphics and sound, right? So I think that really challenges a lot of developers to make good games that keep people’s attention.”

“We’re harking back to the old Super Nintendo days and Game Boy days.”

The engineers behind these interactive cubes might argue they’re recreating the joy of another product of the 80s: the Commodore 64. For many coders and future game-makers, the personal computer was the first time they had all the tools necessary to not just play on this new machine, but create with it, as well. Sifteo cubes are an extension of this maker-passion: They thought about the games they wanted to be playing, looked at the marketplace, and found they didn’t exist. So they built a platform to bring their hopes to life.

M. Elizabeth Scott, lead engineer at Sifteo, describes their unique approach with simple declaration: “The system itself is the game world.” In an article posted on Adafruit.com, a site for electronic makers and digital DIYers, Scott writes about the challenges of creating a miniature console inside a tiny cube. The piece is dense with jargon but worth exploring if you know your ARM processor from your Arduino boards. If not, one of her sub-headings boils it down: “Just Add Magic.” There be pixie dust in these tiny miracles; you need only pick one up to understand.

Opening the package, it’s clear this is a toy crossed with a system, or a board game stuffed into an iPod, or a Game Boy split into four separate pieces. “Let’s Play!” the inside cardboard says. On the inner package, an anthropomorphized Sifteo Cube stands on sprouted legs, holding a skateboard, rocking a purple mohawk and a heart for a nose. The little creature looks both innocent and malevolent; a mischief hides below the surface, itching to disrupt our preconceived notions of what a toy and a videogame look and feel like.

The little creature looks both innocent and malevolent; a mischief hides below the surface.

The initial play experience maintains this subtle confusion, of everything being just left of center, an unknown variable complicating a formula you thought you’d long ago memorized. It’s that feeling of uncertainty endemic to doing something new. It’s not the skateboard’s fault you fall off the first dozen times. The first time an early computer user brought their hands away from the keyboard and placed fingers on this strange “mouse” contraption must have popped some brain synapses in strange and unusual ways. Because that’s what this is: A new interface. Though it borrows elements of smartphones, handhelds, and Dominoes, the end product is its own animal, a stroganoff looking nothing like the ground beef and noodles necessary to put it all together.

You don’t know how to hold them. I tried Chroma Splash first, the simple gem-matching puzzle game. Instinctively you keep the cubes face up on the table, switching and swapping the three out by sliding them across the surface. But then I picked one up and “neighbored” two in mid-air, held vertically. That works, too. I imagine those picking up their NES controller in 1985 had a few misgivings at first, but the intuitive D-pad and face buttons became second-nature quickly.

Maybe my twenty-five years of punching at rounded circles with practiced ease has dulled me to the sorcery that occurs between input and a television’s screen output, the traditional landscape of videogames. And it’s that same rigid expecation that Sifteo breaks through, even disrupting the more recent normalcy acquired with smartphones the past half-decade. 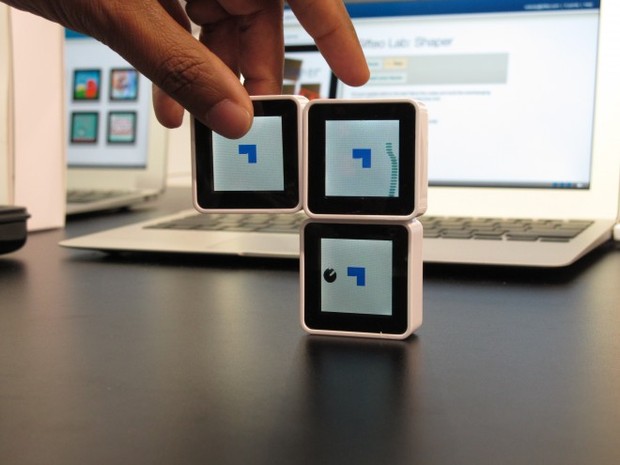 “In classic videogames, the player’s hands manipulate a control interface while their gaze is on the screen,” Merrill told us back in 2011. “That way of playing has been very successful. But it only captures a certain slice of how we interact with non-electronic objects in the world.”

What we call that new frontier is yet unnamed.

This last comment speaks to the new paradigm established not only by Sifteo, but the proliferation of tiny chips embedded in everything, from shoes to skin, that is breaking down the barrier between analog and digital. ‘Friends’ are thumbnail images; phones tell jokes. The line between what is tangible and ephemeral has never been blurrier. Screens that were once mere windows have now become omnipotent sandboxes, the glass ground into malleable grains accessible across the globe. In our present moment of transition, whomever synthesizes those bordering territories the best will stake their claim to an ever-shifting landscape. What we call that new frontier is yet unnamed.

But Sifteo wants to be part of the lexicon.Their cubes speak a new language cobbled from loan words. The kind of language a seven-year-old picks up on right away, and a thirty-one-year-old stumbles over. And as with any new grammar, once you learn the rules, you now hold the building blocks for all kinds of expression.

“What makes the Nintendo experience so good?’ And what are pieces we can use to inspire us? To do even more?”

Those looking to expand their vocabulary can do so with little obstacle. Sifteo offers their software development kit (SDK) for free on their website. Average customers have already pounced on the possibilities; one enterprising tinkerer in Sweden turned his Cubes into a remote device to play and organize Spotify. Lin tells me they have no plans as of now to release non-game apps to their store just yet, choosing to focus on social, family-friendly entertainment.

“We want to be like the new DS,” he says. “We want as many people to have it as people have gaming systems. Maybe not as big as everyone who has a smartphone… But anyone who would get gaming hardware, we would love for them to have this, also.”

And they’re looking to past pioneers for clues on how to forge through unknown territory.

“We have the Wii and Wii U both at the office,” Lin says. “We play a lot of their games. We kind of deconstruct them: ‘What makes the Nintendo experience so good?’ And what are pieces we can use to inspire us? To do even more?”

Their notes are paying off. Ice Palace is set to release next month, the next chapter in their Sandwich Kingdom series, an adventure game drawing on the classic overhead style of The Legend of Zelda. But how do you explore snowy caverns and grapple with fearsome owlbears using a set of interactive cubes? You’ll have to play to find out.