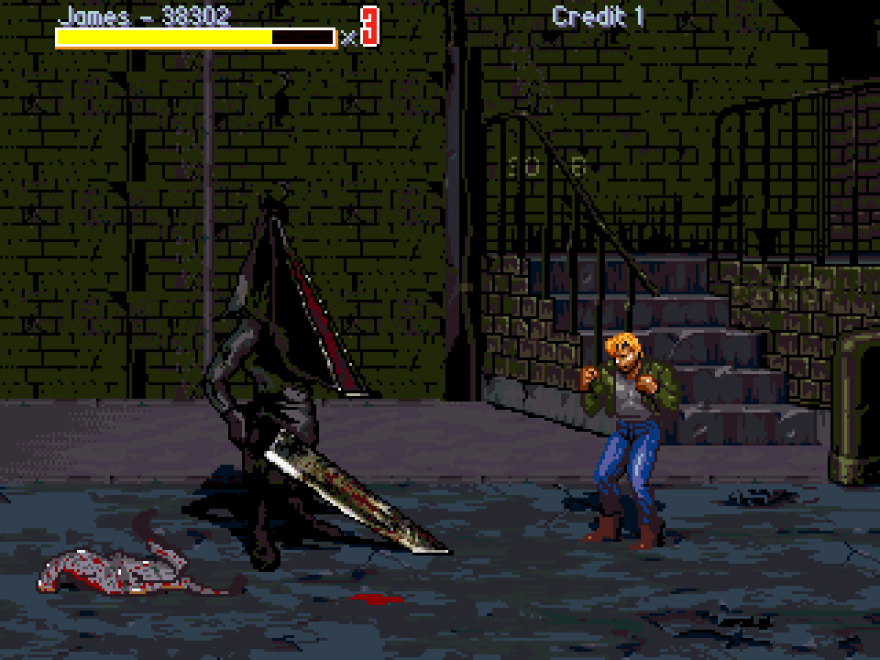 Fan games come in all shapes and sizes. There are high-def remakes like the recently cancelled Resident Evil 2 Reborn, and spiritual successors like Allison Road, which deviates in some ways from its initial inspiration P.T. while still retaining some of its influential qualities.

Then you have things like Streets of Rage: Silent Hill.

Silent Hill has never been known for its combat, which is often clunky and unpleasant, but Streets of Rage: Silent Hill changes that up by using the foggy town as a backdrop for its OpenBoR-powered beat ‘em up.

This isn’t a cheap, gimmicky reskin

In this cross-genre reimagining, you get to take on the town as series protagonists James Sunderland, Heather Mason, and Travis Grady, but also side characters like Angela, Maria, and Eddie, and enemies like Scarlet and the iconic Pyramid Head. Each character is modeled after a fighter from Streets of Rage, moveset and all.

This isn’t a cheap, gimmicky reskin, either. Opponents will be recognizable to Silent Hill fans as they’re pulled from almost every game in the series. Similarly, levels include the foggy streets of the town, memorable locales like Rosewater Park, the iconic rusty corridors of the Otherworld, plus the usual apartment, prison, and hospital settings thrown in between a few familiar boss fights.

While Konami turns to abrasive pachinko machine versions of its survival horror staple in the wake of Silent Hills’ cancellation, we can probably expect to see more fan games of the series pop up as time goes on. I’m honestly surprised there isn’t more already, given how dedicated fans of this series are.

A few already exist. Allison Road, inspired by the still actively played Silent Hills demo P.T., is about to launch a Kickstarter soon, but there are also small standalone experiences like Alchemilla and PuniTy. I’m still wondering when someone is going to attempt a ground-up remake similar to what Black Mesa is for the first Half-Life—though Konami would probably shut it down pretty quick.