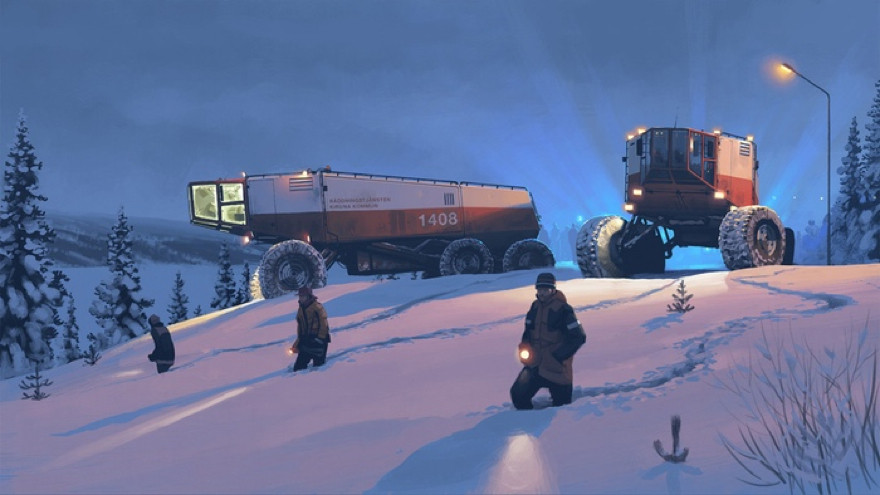 The beauty of an imaginary childhood is that it never has to end. You can keep going back to the well in search of inspiration. Thus, Swedish artist Simon Stålenhag, whose 2014 book Tales of the Loop depicted the suburban milieu of his youth albeit with a sci-fi twist, is now raising funds on Kickstarter for a two book volume featuring Tales of the Loop and the forthcoming Swedish Machines, Lonely Places.

Stålenhag’s images start as pictures of Mälaröarna, where he grew up. His Kickstarter video reveals it to be a quiet area filled with industrial and infrastructural detritus. Watching the video, one gains an understanding of how a child could see this world as part of a sci-fi universe.

That universe, it should be noted, is both of the future and of the past. The devices that hover through its skies, while not of this world, often take on the appearance of props and effects from the ’80s and ’90s. Indeed, Tales of the Loop is an engrossing work because it encourages you to spot the influences in Stålenhag’s work. In some instances, his sci-fi creations are clearly evolved forms of farm tractors, the sort of things a fertile imagination will conjure up when bored.

The paintings are a window into childhood’s imagination.

In that respect, the paintings of Simon Stålenhag and their accompanying stories are a window into the imagination of a child, where free-association reigns supreme and any object can be interpreted as having descended from outer space. This is a popular idea: Man of Steel and recent entries in the Transformers franchise have sought to juxtapose the idyllic world of childhood with clanking devices descended from other worlds. But Stålenhag’s work stands apart because of its earnestness. There are fantastical objects in his world but they exhibit a peaceful harmony with nature. They are not necessarily here to kill you and they are definitely quieter than the foreign objects seen—and heard—in the films of Michael Bay and Zach Snyder.

To find out more about Tales from the Loop and to support it check out its Kickstarter.