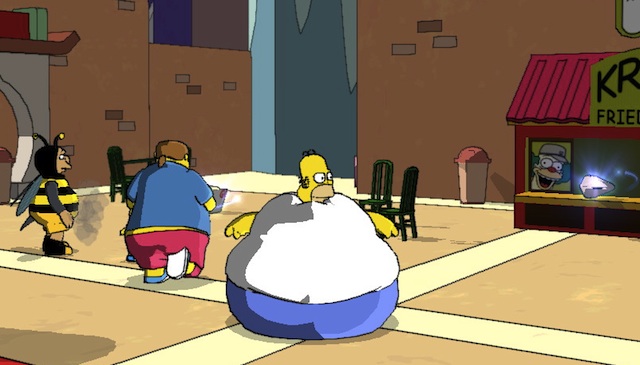 “You’re certainly doing your job today, Mr. Sun,” Hans Moleman mutters in his wavering, gravelly voice as I pass him by. I—Bart Simpson at this moment in time—stop dead in my tracks and turn back around. I want to see how one of my favorite odd moments from The Simpsons’ past will turn out on this new interactive form of Evergreen Terrace. In the original episode, Mr. Moleman takes off his glasses to squint up at the sky and accidentally sets his shirt on fire in the process, continuing to walk down the street afterwards with deadpan acceptance. But here, nothing happens. He keeps walking down the street. No flames. No comic misery.

I feel lost, like someone told me half a joke and left the punchline hanging in the air.

Another moment from that day: I was walking down the street from the third GameStop I had visited that afternoon to find an old copy of The Simpsons Game when I passed by two very pudgy teenagers. “And then he says fly monkeys, fly! But they just … woomph!” one says to the other, arcing his hand in a downward spike to show what happens to Mr. Burns in another great Simpsons moment. My god, I think, do I really sound like that when I’m endlessly quoting The Simpsons?

How does a game tell a joke? The funniest things I remember are from gaming’s accidental moments—the unintentional slips so far into the recesses of the uncanny valley you can’t help but cackle at what you were taking so seriously a moment ago. The sudden slide Dragon Age makes into softcore gay porn complete with its own Brokeback Mountain subplot; the unintended moments of slapstick humor in Skyrim, which turn fantasy’s monstrous dragons and somber geezers into the Three Stooges. And this isn’t even mentioning the vast lore of Gojira-esque bad translation (“All your base are belong to us”) and even worse graphics that drive games into the realm of camp. Point is, games are often most funny when they’re trying their hardest not to be.

It’s half a joke delivered too early, or too late.

But I really have no idea what it means to be funny. Most comedians I admire are also the most depressed—and depressing—people I can think of. Listening to Marc Maron’s podcast usually plays like the aural equivalent of a nervous breakdown. All the other times, I have no idea what the hell is going to happen. In a recent live episode, he invited Jeffrey Tambor onstage. “How are you?” he asked, politely enough to a man his senior both professionally and, well, age-wise. “That’s none of your business,” Tambor replied without missing a beat.

That’s how it feels to play The Simpsons Game—I’m humbled to tiptoe around something I’ve grown to revere, given its long legacy. But I can’t tell if the game is just a big joke being pulled on all Simpsons believers. It’s funny—hilarious even—but not in the way I expected. More than anythings, it’s plain odd to see characters I know and love from years of watching, rewatching, memorizing, and rewatching yet again the actual Simpsons television show rendered in a comical cel-shaded 3D. Comical in the good way. Mostly. There are still those moments, like my chance encounter with this half-eaten classic Hans Moleman bit, where I’d trade everything back in just to watch the original episode again.

The fact that I feel obligated to separate “classic Hans Moleman” lines from “classic Simpsons lines” says something about The Simpsons in and of itself, something that makes writing about the show slightly terrifying. I can imagine my childhood without videogames. I can picture Saturday mornings devoid of Teenage Mutant Ninja Turtles. I can almost picture myself growing up without Calvin and Hobbes. But I can’t imagine life without The Simpsons.

The Simpsons Game was released in 2007, the same year as The Simpsons Movie. Both were met more with a sense of their own cultural and commercial inevitability than real excitement. The Simpsons was already well on its way to becoming the longest-running American sitcom, so really the film adaptation had to happen whether or not people actually wanted it to. And like the movie, The Simpsons Game was received with the residual warmth accrued from countless fans for so many years.

But the question underlying all of this inherited politeness always seemed to be, “Why?” From its beginning in 1989, The Simpsons had perfected the 20-minute episode. That’s enough time for an idea, a sparse vignette of a story. Pared down so ruthlessly, it seemed free from the excesses of modern television. So why throw away the pacing—comedy’s all-important factor of timing?

For The Simpsons Movie this is just a matter of stamina, both for the filmmakers and the audience. It’s a different problem for a videogame. Suddenly you’re sharing procedurally generated moments with people you’ve grown up with. It’s a Hans Moleman whose shirt doesn’t catch on fire. Ian Bogost wrote of Heavy Rain that games, despite their cinematic flair, are distinguished from movies for the way they make use of “prolonging” rather than editing. While cinema relies on chopping a moment down to the bare essentials, games extend a sequence to give the player a fuller experience of, say, losing a child (something that happens to both Ethan Mars and Homer Simpson) or having awkward sex (ditto). How can you create Sideshow Bob’s amazing and agonizingly prolonged rake schtick in The Simpsons Game rather than The Simpsons proper?

I’m not sure that you can, not in the way that makes the original Simpsons so funny. The Simpsons Game is full of these cameo appearances—not by the characters per se, but by their greatest televised moments. After defeating the aliens (Kang and Kodos) in one level mid-game, Sideshow Bob appears for some reason, as if he were just summoned by the producers to step on a rake one last time. The television bit was ridiculous and incredible because of its reductio ad absurdum extension of a tired gag. But now it’s just another rake sitting on a floor, just like Hans Moleman’s “Mr. Sun” lays there waiting for you to pass it by. It’s the man repeating the original Simpsons lines on the street—funny to the person who knows it so well that he can mentally rebuild the original context in an instant, but otherwise devoid of meaning. It’s half a joke delivered too early, or too late.

Until @horse_ebooks gets a spot on late-night television, I’m convinced that humor can’t be collected solely through bits of code. Stringing together nonsense in the hope that it resonates either dramatically or comically certainly feels like a product of the eclectic unpredictability of the digital universe, but to call it art or humor is the programming equivalent of cramming a room full of monkeys on typewriters. And that’s the problem: Great jokes aren’t procedural things. They don’t sit there waiting to be discovered. They have to be fed carefully to the audience. That’s why improv is hard, why Monty Python hated working with Saturday Night Live, why making good comedy is as confusingly hard work as making good games.

This is the tragedy of The Simpsons Game—it’s all the comedy of the original show, and none of the timing. The plot is basically a long-form version of one of the show’s Halloween episodes, which don’t rely on continuity. This is a nice way to get around explaining why Homer can engorge himself to massive proportions, Lisa can now levitate objects, and Marge is suddenly slaughtering her fellow Springfieldians left and right.

But it also gives away the show’s central charm: the warmth that always crept through every episode, and the factor that I think defined what die-hard Simpsons fans consider the show’s golden age. The Simpsons did the American family better than real sitcoms could. But after the show, cartoons continued to go their snarky way. The pace increased frantically, the jokes became more frantic and spastic. The punchlines hit harder, but the characters didn’t care about each other as much. Pretty soon you end up with Family Guy.

The best moments of the game that still leave me grinning are the ones that were meant to be discovered. At one moment I was slapping at the game’s frustratedly sloppy controls when Homer blurted to Bart, teary-eyed, that he’s “killing at a fifth-grade level.” I find it nestled i the corner when he was hopping across a platform in the belly of the videogame factory. Next to me a strung out, middle-aged Sonic the Hedgehog slumps along defeated. “Aliens?!” Homer shouts when Kang and Kodos first arrive. “They’re probably here to take our jobs!” Here you finally get the well-rounded character of Homer Simpson, seeing both the naïve sweetness of his affection for his kids and the loudmouth thuggishness that made him the most iconic stereotype of American male stupidity.

A sequel to The Simpsons Game was originally planned, but EA axed the idea late last year. Let’s face it, the Simpsons aren’t really strangers to selling out, anyway. At least the first game almost made comedy something you could play—giving the characters another venue to become as animated as they are in the show. “I’ve made a life for myself,” Professor Frink tells you at the end of one level where you dive into the fictional source code of the game. Embracing Koopa Troopa as his new wife, it’s as if he’s being passed off, however temporarily, to this new world of entertainment. Perhaps, with a little more space, he could have truly made it his home.