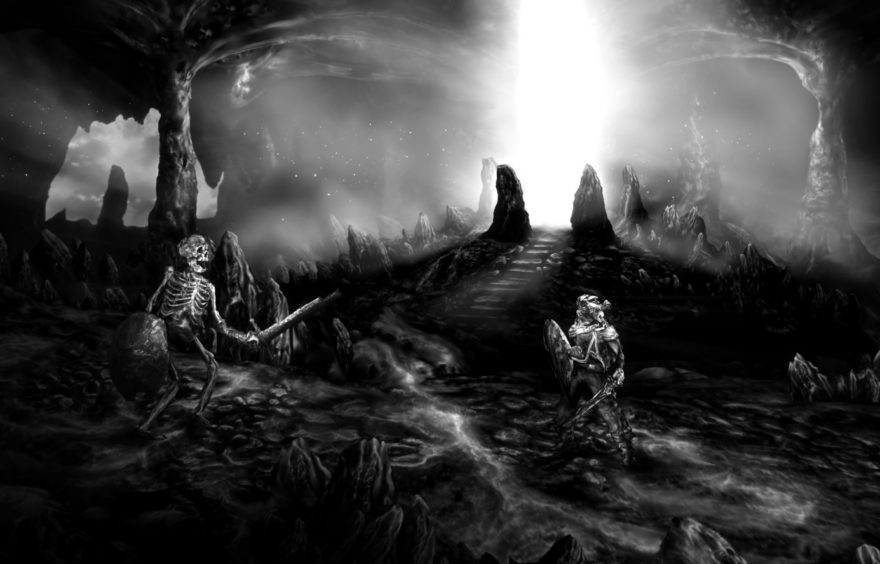 If you asked me to describe bitHuffel’s second title, Sinner’s Sorrow, in one word after having seen the teaser trailer, it’d be bleak. It’s all skeleton soldiers, sentient trees, large demons, bashed iron shields; dark medieval conflict. It’s also a drastic departure from the studio’s first project, Zenizenzic (2015), but for developer Ruud Koorevaar that’s half the fun. “On this new project I want to be challenged by new ideas and new approaches,” said. “Going completely the opposite direction in regards to art style and gameplay is definitely one way to accomplish that.”

While it may be cliché to say,t here’s definitely a touch of Dark Souls (2011) about this new game. And I’m not pulling that out of my arse: Koorevaar cites the title as an inspiration, alongside other game series’ such as Uncharted, Darksiders, and Diablo. However, he warns players away from the idea that it might ape one of these inspirations. “We are forging our own approach,” says Koorevaar, “to what we want to do for gameplay and how we want to tell our story.”

“pulls you through not just a few unsettling and surprising situations”

Part of that approach ties in to the bleak tone of the game: “As a player you are put in a dark world,” continues Koorevaar. “You aren’t there without reason and the title of the game should hint towards what that reason could be, but I won’t go further into the story as that will be for you to discover on your own.”


The question arises, then, among all this namedropping and comparisons, and that’s what makes Sinner’s Sorrow unique? Two things. Firstly, there’s the art style, with all the 2D art being completely hand-drawn, with the flat sprites given depth using parallax and dynamic lighting. It’s also entirely drawn in black and white, although as you can see in the teaser trailer it looks crisp and just adds to the teaser’s atmosphere.

Second is the action. “It won’t be a murderously difficult experience,” says Koorevaar, “such as Dark Souls, unless you choose for it, but it will be a sweaty palms type of game which pulls you through not just a few unsettling and surprising situations.” You’ll be engaging in melee-driven combat, but also solving puzzles and exploring the game’s unusual world, too.

Bringing these two elements together, Sinner’s Sorrow is aiming to create a harrowing atmosphere you don’t see in many other 2D games. I think I’d like to revisit my opening sentence and amend my description of the game to two words: quite bleak.

You can find out more about Sinner’s Sorrow over on its website.