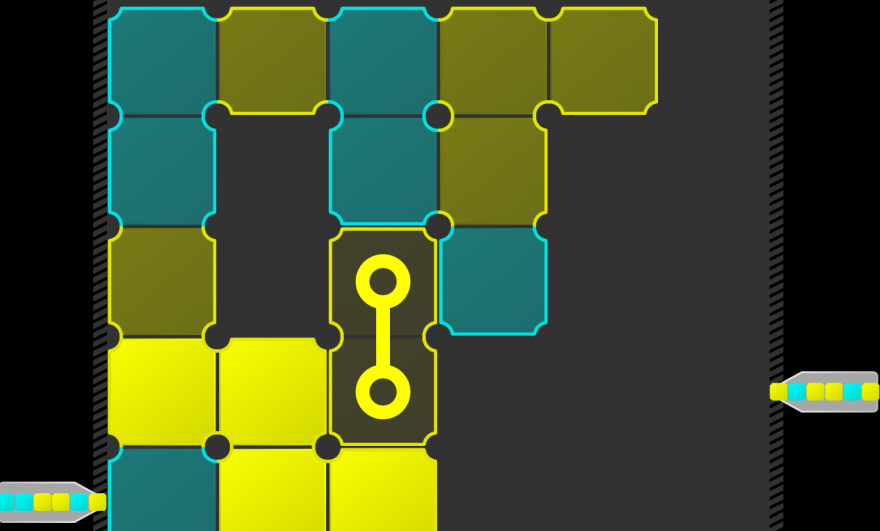 Tetris is one of the greatest games of all time for a lot of reasons, but one of them is its scale. You can famously start anywhere from level 1 (slow) to 9 (fast), but even if you start off at level 1 you know where the train is headed. Things will get too fast. You will lose in Tetris. This is why so many people love Tetris, and it’s also why it has been ported to every platform on the planet, including like kitchen appliances.

The recently released Sirtet also aims to appeal to everyone. It is Tetris for grandparents, if your grandparents didn’t already like Tetris. But in other core ways, it is almost an inverse. The fast-paced, snap-decision gameplay found in the Tetris’ falling blocks is all but gone. Replacing it is a leisurely set-your-own pace design, polite enough to let you take your time surveying the arrangement of blocks on screen before deciding where to make your next move.

The only real connection between Tetris and Sirtet, aside from the name, is the use of “tetrominoes”—the seven odd-shaped blocks you spin and rotate into place in Tetris are re-used here, but in very different ways. Sirtet is really more of a color-matching game, opting for a slow, sleepy-eyed experience where panicky time restraints are nonexistent. Rather than manipulate tetrominoes to form horizontal lines, in Sirtet you manipulate horizontal lines to form tetrominoes. You can drag and drop lines anywhere on the screen, and draw tetrominoes matching in color. It is a clever gimmick that flips the game on its head, favoring logic and methodical patience over chance and gut reactions.

But the problem with being patient is that it isn’t very fun. While this set-your-own pace style of gameplay allows for a more thought-out approach to spatial problem-solving, the prolonged decision-making the game encourages deflates any of the tension and twitchy appeal that gives games like Tetris their addictive quality. Simplicity without restrictions yields invincibility: In normal mode, Sirtet is simply too easy for its own good. How easy? Well, the first game of Sirtet I started is still happening (more than one game can be going at once). If I take my time and play it safe, I can’t lose. For an endless puzzler, defeat is an essential ingredient.

Thankfully, the game lets you up the challenge in an “extreme” mode. Like the original Tetris, Sirtet doesn’t add difficulty by altering its core system, but by ramping up the surrounding factors. In Tetris, this meant the game got faster. In Sirtet, it means more colors to match. It’s a simple way to add some complexity, and, fortunately, it is just the worst. You will, finally, die, and you will be infuriated.

Sirtet struggles in hitting this note, but when you make the game as mean as possible it comes into its own.

Mixing together the largest amount of colors and biggest grid size, “extreme” mode finally achieves a level of excitement unseen in the game’s simpler modes. Once you take on an unmanageable mass of colors, risk comes into to play. The random sets of blocks filling the horizontal lines you wield become menacing, and you’ll find yourself cursing your luck when the game refuses to give you the color you want. It’s Sirtet’s equivalent of withholding the line piece. In this mode you’ll commonly get blocks that can’t fit anywhere, and, like Tetris, you end up piling them up into unused sections of the screen, because what else are you going to do? Its a familiar stopgap in a time-honored march towards defeat.

Tetris is a game that excels at making its players feel frustrated and inadequate. The entire design is built to inevitably out-pace you, levying an unmanageable mess of fast-falling blocks onto the screen until you become overwhelmed. One mistake can snowball into a chain reaction of misguided moves, and the ever-quickened pace and mounting challenge creates a situation where a hot streak can quickly veer into a disaster. Sirtet struggles in hitting this note, but when you make the game as mean as possible it comes into its own. Just like real life, it’s sometimes more amusing to hang out with the jerks.