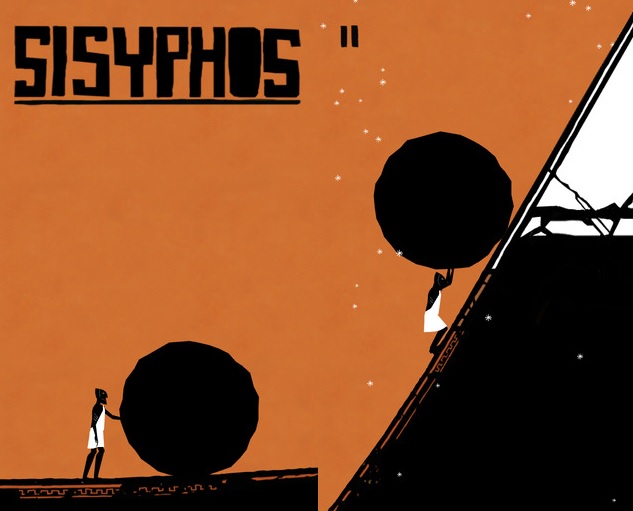 The endless plight of cunning knave and laboring sinner Sisyphus has been used in comparative terms to describe countless arcade games over the years. To take a recent example, the perpetual and punishing score-chasing loop of Flappy Bird is easily traced over the eternal condemnation of Sisyphus.

the muscular atrophy that tolls upon each touch.

If you’re not familiar, Sisyphus was sentenced to a lifetime of hard labor in the Land of the Dead. This involved pushing a boulder up a steep hill, watched over by the rulers of the underworld, Persephone and Hades. The real kick to the teeth came every time he had exerted the greatest toil in order to reach the hill’s summit, at which point he would be forced to watch the boulder roll back down, requiring him to start over entirely.

So, you can see why the repetitious challenges of videogames have been referred to by many as a “Sisyphean task.” But Sisyphos, an iOS game by Berlin-based studio metameta, takes the connection between Sisyphus and videogames to the next step.

Made to resemble the Greek vase the myth is painted upon, Sisyphos does away with the metaphor and makes a score-chasing challenge out of simulating the daunting task of the Greek criminal. As with Flappy Bird, the ingenuity of the game’s design is found in the nuances of a single touch.

Operating Sisyphus is a maneuver of two parts. First, you tap and hold the screen to have him lift his hind foot and place it a step forward on the ground. You let go, and then return your touch to the screen to have Sisphyus extend to full stretch, like a fleshy hoist between the boulder and the ground. It feels very mechanical, but the sounds of a strained sigh and the boulder’s weighty scrape against the rocks, gives you an idea of the muscular atrophy that tolls upon each touch.

Initially, it’s easy to find a comfortable rhythm with the tap-and-hold, tap-and-hold instruction. Where Sisyphos finds its difficulty is in testing your endurance. It also demands you speed up the beat the higher you go up. As you approach the denouement of your Sisyphean undertaking, reaching the hill’s summit and its steepest incline, a tension builds, just as the cold snow does in the air. You can see the peak, and the release that comes with reaching it is tangible, but you become distracted and fumble. The boulder rolls back down. Sisyphus droops with disappointment, as do you.

Then Sisyphos reveals its punchline: a Stoicism multiplier. Every time you attempt to push the boulder up the hill, the Stoicism multiplier applied to your score increases by 0.2, rewarding those who more closely simulate Sisyphus by repeating the task over and over.

Oh, and you can reach the peak—I’ve done it. Sisyphus pushes the boulder to the other side, and skips over the top with light feet. Now you’re on the other side of the peak, the visuals inversed, ready to attempt the upward climb once again. There is no end.

You can purchase Sisyphos for $0.99 on the iOS App Store.