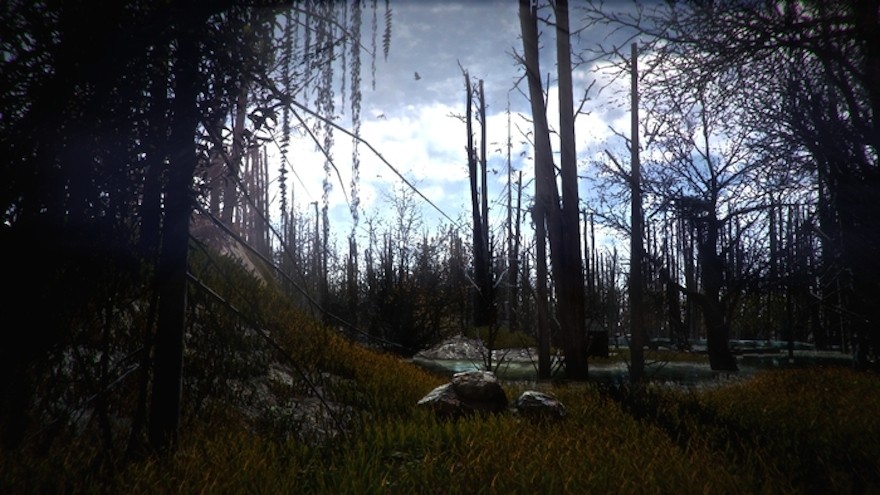 Like everyone else, I liked True Detective. But I loved it for awhile there, namely the first four episodes: the relentless, pitch-black tenor, the delirious, psychedelic colors, and the subtlety of its New Orleans neo-voodoo noir. It pretty much hit that big episode-four tracking shot—which, in the end, signified nothing more than itself—and fell apart from there. When we found the monster, it was not all that monstrous. Horror normally falls flat when it gets explicit.

INGONGA, which is currently under development, evokes HBO’s weird-fiction hit in more than just locale. Although, to be clear, it does evoke it in locale: the bucolic, green and brown swamps slowly pan to reveal shadowy woodsheds full of occult secrets. The brambles of trees in a deep swamp start to look more and more like tiny demonic fingers. A murder of crows circles high in a red sky. Yes: we are in Cary Jojo Fukunaga’s acid-hot New Orleans.

The game has big-studio pedigree, as evidenced by the presence of Call of Duty posters in its Kickstarter video, but this comes through in the game’s look. While something evocative and atmospheric could’ve been interesting, the hyper-detailed environs of INGONGA bring out a grittier, cinema verite look. And hey, what’s a first-person game but a really long tracking shot? If they can deliver on the monsters, INGONGA might be interesting indeed.