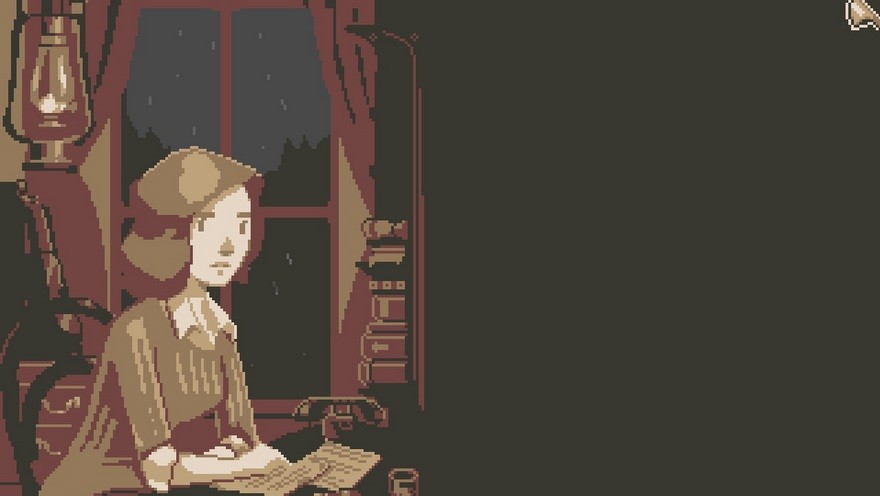 Cinema’s foremost split-screen advocate Brian de Palma called the device a “meditative form.” He suggests a split-screen sequence can slow a film to a crawl because “there’s so much to look at.” The viewer suddenly has double the information to take in; the filmmaker can perform a sort of adiago, weaving gracefully through an extended flourish.

Now, I don’t know what the guys behind 24 have said about the formal utility of split-screen, but it probably doesn’t involve the word meditative.

LeafThief’s Ludum Dare two-hander The Lion’s Song, however, effectively employs split-screen to the de Palma ideal. You play as Wilma, a composer holed up in the Austrian Alps by a raging storm sometime in the early 1900s. So far so typical, but hear me out.

As nature batters Wilma’s cabin, you have to click about the room to find inspiration for her composition. It’s pretty basic. Click on the window and Wilma muses on the sound of the pounding rain, which inspires a melody.

Then the phone on Wilma’s desk rings, and the right side of the screen—previously blacked-out—reveals a man at his own desk. His name is Leos, and he’s completely jazzed about this “telephone” contraption. 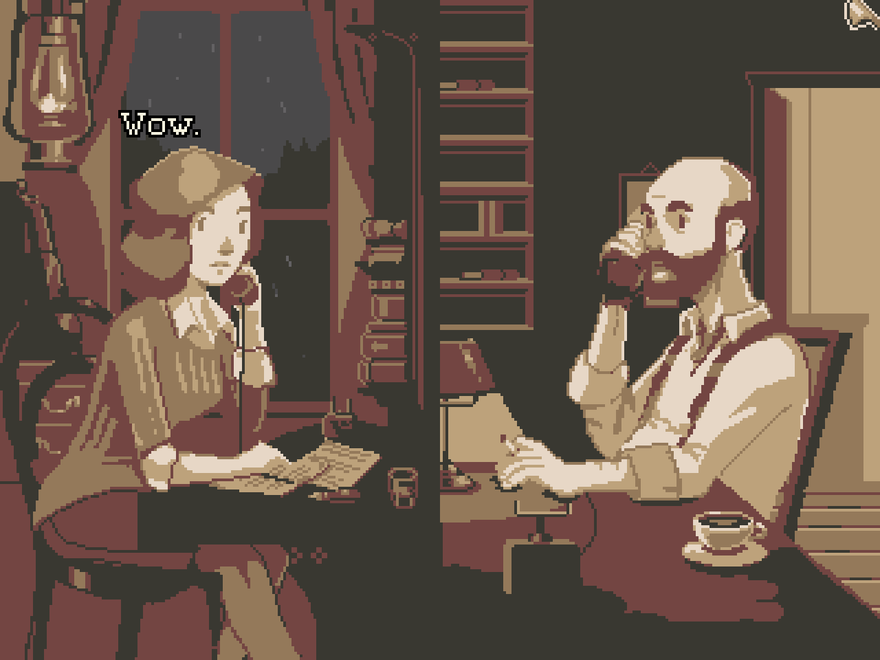 As in Cyberpunk Game Jam MVP VA-11 HALL-A, the writing is strong enough to carry the game on its own, and LeafThief seems to know it. Beyond clicking on stuff around Wilma’s cabin there’s little extraneous interaction to be found, no note-hopping rhythm minigames or pixel hunts to clutter the narrative. The dialogue manages some touching moments via spare, emphatic language and the surprisingly effective facial animations of the two characters. Your conversations branch some, and there’s value in going back to learn all you can about these people.

I counted three: resting, happy, and sad, but they’re clearly delineated and just exaggerated enough to convey emotion. The art overall is evocative without ornamentation: an early-Lars von Trier amber color palette (more Breaking the Waves than his piss-yellow The Element of Crime) evoking a cocoon of warmth against the constant droning storm outside, the violin sitting unobtrusively in the background, the stacks of books that include a Holy Bible. Even the menu screen is an achievement: a long shot of Wilma’s cabin nestled among a blanket of trees, overlaid with an elegiac cycle of chords that very well could be her composition.

There’s no doubt the split-screen resounds thematically—the theme of the competition is “connected worlds”—and visually—contrasting the characters’ living spaces, one all clutter and the other neat, straight lines.

Yet despite that, The Lion’s Song is more akin to a finely-honed short story. The kind where the characters withhold themselves, exposing the tiniest slivers of sadness and doubt, never spilling it all—until you re-read it and realize it was right in front of you the entire time.