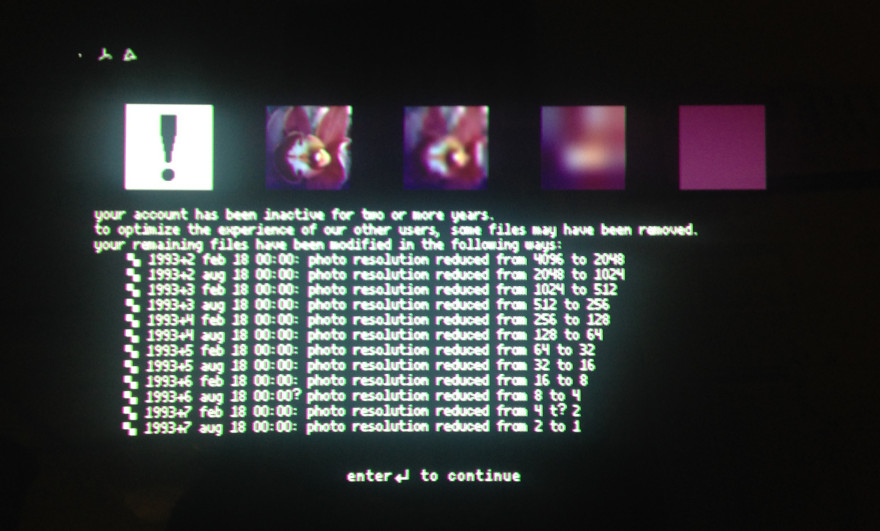 Are you supposed to keep your passwords written down somewhere for when you die? I wonder this sporadically as I browse the web these days. I’ll see Facebook posts and tweets from family members announcing to the online world that the person they followed has died. I find myself questioning how they got into these personal accounts. Did they know the passwords? Did they employ someone to hack into it and find out? Were the passwords written down on a piece of paper found in a desk drawer?

we arrange our lives with files and folders

This inquisitive worry is likely a result of spending so much time online myself. When I do die, part of me hopes that someone is able to find a way into my accounts and tell the people who only know me through the internet of my fate. I also think that perhaps it doesn’t matter much if such acquaintances never found out I died. I go back-and-forth on the idea.

But there’s more to this line of thinking than that. As I’m sure is the case for most of us, I have a lot of personal information stored on my computer, much of it locked behind a password. There’s nothing shameful in there: mostly archives of articles I’ve written, some photos, and a couple of diary-like entries I’ve written to get something off my chest (you can’t tell the internet everything).

I’d want those close to me to be able to find these. There are two reasons for this. Firstly, I enjoy the idea of being somewhat enigmatic and having people who thought they knew everything about me discover much more after I’ve passed away. Secondly, I vividly remember how my mother acted after my younger brother died, and how her weeping was both salved and worsened by smothering herself in his clothes and belongings. It was the smell that did it. He was gone but the scent made it as if he was still around living and breathing. Somehow that helped. Perhaps, then, if I leave behind parts of myself within my computer and ensure it’s accessible to the right people, it will help them to remember me in a similar way.

While these ideas have been with me for a while they also formed the heart of an event held back in April called ‘The Institute of Desktop Archaeology‘. It reasons that the machines we use “have an inherent body, a personhood that is built of daily use,” and core to this imprinted identity, if you will, is the desktop. It’s here that we arrange our lives with files and folders; hyperlinks, games, artistic tools, shortcuts to important documents.

This extract from the event’s description is particularly insightful:

“There is an externalization of person into machine: the incidental curation of living-space that says so much about those living there. We have become intrinsically linked, as individuals, with our devices. It is no surprise that we should share the same terminology for our fundamental building blocks of selfhood and storage: memory.”

The event called upon 20 artists to each create a project in the format of a desktop space that explored the notion of finding human traces within the systems we shape with use. One of those artists is Loren Schmidt (creator of the glitchventure Strawberry Cubes) who ended up creating skeleton flower for the occasion.

each photo calls upon our imagination

It lets you explore a cross-section of a person’s life through an obsolete operating system from the 1990s. It flickers with the glitchy signs of decaying data and bears the blurred, low-resolution of software beyond its prime. As you open it up, you’re told that the person who used it before hadn’t done so for two years. To preserve the many photos within it this system has modified them by shrinking them down to 1×1 pixels. In other words, the photos are only a block of color now, so what you end up relying on to envision the photos are the captions.

While that may make any excavation of these memories seem pointless it actually makes it much more powerful. Giving us only a color as a starting tone, each photo calls upon our imagination while reading their caption, and you can slowly piece together the personality that interacted with this machine. The accidental photos of thighs and varnished nails tell us as much about this person as the intended ones of days at the beach and the night sky.

The ambiguity space is enormous here as we not only have to expand upon the single pixel of the photo but also have to guess who the people being referred to as “you” are in the captions. What’s important here is that skeleton flower gives us—as strangers to this person—a chance to shape these memories as part of our own, inventing their visuals in our heads. Being given this creative opportunity is perhaps more interesting than rifling through someone else’s memories if they are unrelatable and mean nothing to us.

There’s a captivating touch of mystery to some of the photos too. The captions describe scenes with question marks as if something can’t quite be made out. Not to mention that the majority of photos have been corrupted and the captions rendered a garbled sequence of unknown computer symbols. The images we are denied from seeing prove to be even more alluring than those we have partial entry to. As is true with the remarkably similar Her Story released earlier this year—in which you investigate a murder by searching an old video database—the most fascinating mysteries in skeleton flower are those that go unsolved.

What these two projects have in common is making use of the limitations and degradation of older software to obscure their stories. To us, in our supposed age of information, the blank spaces are are a tantalizing object. We live in a time when everything is monitored and recorded, when hoaxes are shot down near-instantly with science, and now there’s an interest in unearthing even the people iconized as memes. Nothing remains unknown for long these days. Peering into the past through the cracked lens of outdated computer programs is one of the ways we can indulge in mystery and, for once, just let it be.