“We live in a culture that tells us we want and deserve the best, and now we have the technology to get”
? Aziz Ansari, Modern Romance: An Investigation

Yes, technology has changed the way we love and get intimate with each other. Aziz Ansari even teamed up with sociologist Eric Klinenberg to understand these changes in his recently released book Modern Romance. Born out of Ansari’s “ghosting” experience years ago, the book focuses on texting as a medium that encourages “flakiness and rudeness and many other personality traits that would not be expressed in a phone call or an in-person interaction.”

But, to an extent, pinning digital culture’s tendency toward rudeness and flakiness on texting—while also heralding the phone call as a solution—seems a bit short sighted. Because at the center of how technology changes the way we romance today lies the complete and total collapse of time and space. Think of it this way: before, if your beau moved to another country or, hell, even another state, you’d probably both seriously consider calling it a day and parting ways. Nowadays, with all the incredible tools we have to simulate hearing and seeing each other, it’s a lot easier to look long distance in the face and say, no, our love can withstand these thousands of miles (since my phone gets good service and I can pay for internet). When regularly scheduled Skype sessions are just a click away, time, space, and even the laws of attraction don’t feel like they hold that much power over you.

The interactive installation Skype Heartbreak Show begs to differ. Created by a team of NYU Game Center and NYU Tisch School of Arts students, the installation consists of two outward facing sets of computers, monitors, kinects, and loudspeakers in the middle of a room. Each monitor plays one half of a Skype conversation between a man and woman in a long distance relationship, over the entire period leading up to their eventual breakup. The audience is encouraged to move around the room and between the two sides of the story. Besides the variations in dialogue, each screen also displays the couples internet exchanges like Instagram feeds, email exchanges, and iMessages pertinent to their relationship. To represent their two divergent memories and experiences, some messages undergo subtle changes depending on whose screen they’re displaying on, representing their different perspectives of the same exact virtual exchange.

Skype Heartbreak Show investigates our belief in computers as machines that archive the “truth,” which ignores the part where fallable humans beings are responsible for interpreting that archival material. “The performance also explores the nature of glitch,” says one creator, Ansh Patel. “Technology, like us, has the potential to act in spastic, violent, unpredictable ways. In glitch, data decays. Over enough time, the repositories of our modern lives (e-mails, instant messages, shared pictures and videos) inevitably decay into a state of legacy and incoherence. The information becomes unreliable, even for the machines that originally transmitted and cached them. Digital memory becomes no more reliable than human memory.”

no, our love can withstand these thousands of miles

But the show isn’t just a static movie split between two screens. If you were wondering how two Kinects could possibly fit into a performance about intimacy in the digital age, you’ll be surprised to hear the machines are essentially used to develop a heat signature on the audience, indicating their physical proximity to the screens on either side. “We’re mapping the emotional distance of the characters in the narrative to the physical distance of the audience in the installation space,” says Ansh. So, the further away from either screen the audience stands, the more distance and detachment the characters act toward each other in their breakups. 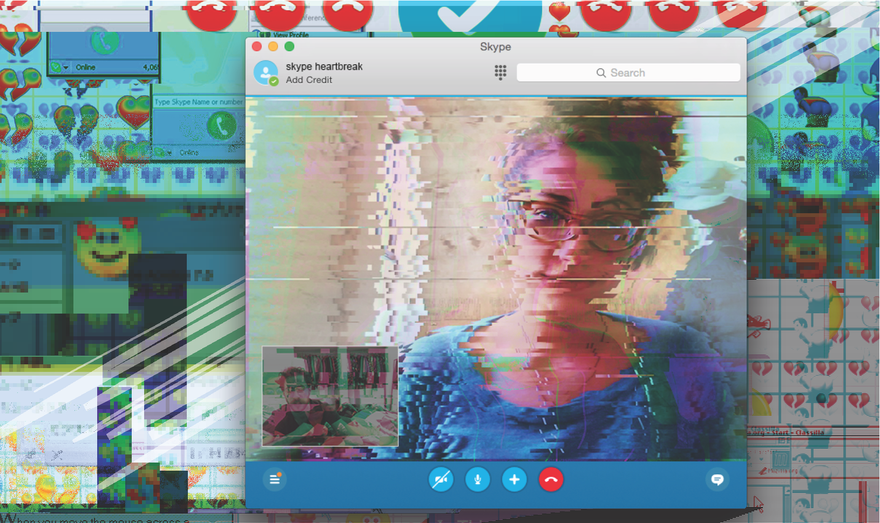 The performance, which is playing at The Chimney in NYC from July 24th until August 2nd, has inspired some unexpected responses from audience members. One group, for instance, tried to “game” the intimacy calculator by restricting their movement in the space in order to manipulate the outcome of the story. But, in the end, their interpretation of the system didn’t end up getting them their desired outcome.

To experience Skype Heartbreak Show for yourself, you can visit The Chimney until August 2nd at 7pm-10pm. RSVP here.