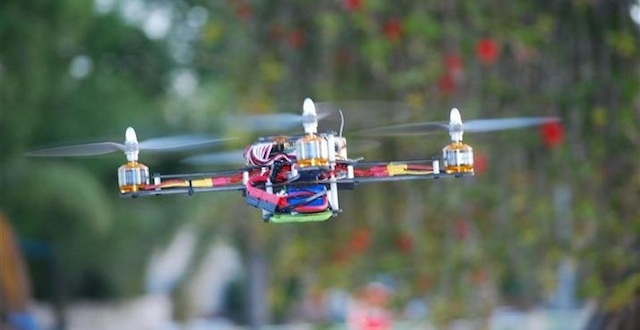 Drone assassins are here. Ethical complexities abound, but for the evolving military an undeniable driving force is toward the video-gamification of war. Sticks and stones are among the oldest objects used as both toys and weapons—what does it mean that our weapons continue merging with the world of play? One answer is the abstraction of violence: on one side, someone is playing with a toy; and on the other side, someone is being killed by a weapon. In a recent story, NPR reports, “The U.S. Air Force says this year it will train more drone pilots than fighter and bomber pilots combined.”

P. W. Singer covers a lot of this neo-military-ground in his book, Wired for War: The Robotics Revolution and Conflict in the 21st Century. In light of the obvious parallel between drone weaponry and toys, various aspects of contemporary toy design inherently add to this conversation. I sought out Ted Carancho, a software manager in the aerospace industry, for a discussion about the playfully innovative drone-development community. Carancho is the creator of the AeroQuad, an open-source hardware and software project dedicated to the construction of remote-controlled four-rotor helicopters, also known as quadcopters. Our discussion mostly remains in the tech-toy context, and I’ll leave it up to you to decide how much of that realm bleeds with militaristic implications.

As I began gathering information about airplane drones in a toy-design context, many people refused to acknowledge that drones are even slightly toy-like. You design, develop, work, and play with quadcopters. To begin, how do you feel about discussing your quadcopters as toys?

I’d consider a drone to be a robot: an entity that has the ability to make decisions for itself in the environment it was designed for. As a community, we are still striving for this level of autonomy wherein a quadcopter can make decisions for the preservation of itself as well as the safety of the people around it. Future enhancements will evolve our quadcopters into smarter and smarter flying vehicles. My dream would be to create a flyable machine that has enough smarts to avoid crashing, and basically travels from point A to B with minimal input from the user.

I can understand, from one perspective, why others wouldn’t want to consider drones as toys. At least with quadcopters, they can be dangerous spinning knives if not flown with care and common sense. So one could think of the horror of an out-of-control quadcopter flying directly into a crowd of people. Users have shared their experiences of injuries sustained during test and development of quadcopters. We try to cultivate a sense that these are not toys you’d let your child play with unsupervised, and they really must be respected as potentially dangerous vehicles.

Lots of toys can be dangerous, but even if we assume quadcopters are not toys, for most people the entry to your world of serious flying robots probably begins with simpler, remote-controlled vehicles. How did you get started?

To me a toy is not only a thing that can be used for a child’s amusement, but also something that can inspire one’s imagination to pursue something they didn’t think they were interested in, or was possible. This was exactly what happened to me. I was at the toy store shopping with my daughter and I stumbled into the radio-controlled section. They sold a toy helicopter which was pretty inexpensive, so I went ahead and bought it and tried to fly it that night. Unfortunately it didn’t fly well at all, and I felt I wasted my money. But it got me looking at real R/C helicopters, and from that point my addiction/hobby took root. I eventually graduated to a $1,500 R/C helicopter which took a lot of maintenance and required a lot of money to repair. I then ran into German-built quadcopters, which eventually inspired me to build my own from open-source hardware and software. Now take into consideration how technology has grown, and what used to cost over $1,000 can now be bought at your local toy store for $50. I believe these flying toys allow us to explore new ideas and stimulate our imagination about what is possible. To this day, I still go to the R/C toy section and see what kind of newfangled flying thing is available.

“To me a toy is not only a thing that can be used for a child’s amusement, but also something that can inspire one’s imagination to pursue something they didn’t think they were interested in, or was possible.”

How much discussion in your community is there about the use of drones as militaristic weapons?

I posed this question to our forum, and the consensus from the group was basically [that] bad people will figure out how to do bad things with innovative technology. Our community tends to avoid the word “drone,” as it now has a destructive connotation from the news. I actually like to think of our machines as autonomous robots. A design goal for the AeroQuad is to strip away traditional details for flying remotely to make it easier for the user. Things like automated altitude hold and obstacle avoidance can be done automatically, while giving the bigger command and control of flight path to the user. I think pretty much the whole R/C model community would like to stay as far away as possible from marking our machines with an intent to mimic military drones. We just don’t want that stigma attached to our hobby. As an example, you may have heard about a person trying to put explosive material on a model airplane with the intent to fly it into the Pentagon. The American Model Association (AMA) quickly condemned it, stating that they do not want our hobby to be associated with such things. We have the exact same opinion.

How much have flying machines changed in the past 10 years?

I can give you an idea of how quadcopters or multicopters have just changed within the last three years. We used to employ crude methods for taking sensor measurements for stable flight using analog sensors. Within about a year after we started, these same sensors now performed their own analog measurements and just spit out data on a digital bus. Today these sensor measurements get fused together to create an Inertial Measurement Unit (IMU), which is just a fancy way to say that a device can measure its position (roll/tilt/yaw) in 3D space. We expect next year that there will be chips that act as complete IMUs. The technology has really improved and driven down costs so that sophisticated quadcopters are affordable for the general public. It’s amazing how small these flying machines can get. There are examples online of drones that mimic flying hummingbirds!

Would you define the interactivity of quadcopters as play?

I define the interactivity as play. Specifically, our users engage with this technical hobby in which they can put their expertise to work in a fun way. This is also a very fun way to learn about the mechanics, electronics, and software development that go into a flying vehicle. I compare this with exercise: You can just hit the treadmill and take a boring run for an hour, or you can play an engaging game of soccer where you still need to run, but in an enjoyable way that can give you greater satisfaction. So, to me quadcopters are high-tech toys. The “adult kid” can take real technology that’s very accessible to the public, and connect high-current batteries to high-powered motors driven by a microprocessor that reads gyro and accelerometer sensors to achieve flight.

What are some examples of innovative uses of quadcopters?


Scott Wayne Indiana is a recent graduate of NYU’s Interactive Telecommunications Program (ITP). Along with various engagements in the professional world of interactive design in NYC, Scott continues to experiment with play, toy design, and community building. Follow SWI on Twitter.