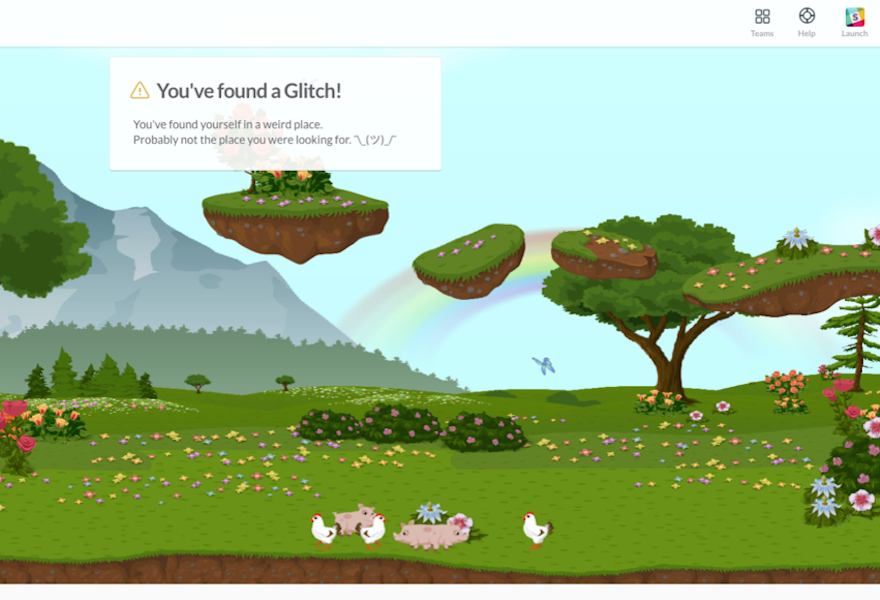 It wasn’t long ago that working in America was defined by a common image: people gathering around an office water cooler every morning to drink coffee and discuss the latest episode of shows like Dancing with the Stars (team Bindi, by the way). However, with 1 in 5 Americans now working from home thanks to the rise of internet, that image has become a little more dated in recent years. Instead of a water cooler, these online workers often employ chat programs like Slack, which allow them a sort of virtual office-space to gather around. With it, they’re easily able to discuss assignments, share reports with each other, and post way too many gifs of cats. And as great as it is to be able to get in a full day’s work without ever needing to leave your couch, working online means that occasionally, progress is halted by a nasty little error—or Glitch.

Personally, Slack’s always been extremely stable for me. Which is what makes the attention to detail they’ve put into their error page so charming. If, on the off chance you stumble across a 404 error in Slack, you’ll be greeted by the following page.

At first glance, it seems to simply be a pleasing, grassy field to offset the frustration of encountering a hiccup. However, it also serves as a winking throwback to Flickr and Slack co-founder Stewart Butterfield’s short-lived MMO, Glitch, as it recreates a level from the game. In Glitch, players focused less on combat and more on collaborative exploration, collection, and building tasks. It’s remembered by users for its imaginative, friendly atmosphere, and though it was unfortunately shut down in 2012, a fan-made remake of the game entitled Eleven is currently using Glitch’s creative commons art assets and source code to allow fans to step back into its world.

experience a little bit of that Glitch magic

Unfortunately, the project doesn’t yet have a full release date, but for now, Slack users can experience a little bit of that Glitch magic. Going above and beyond a simple image, the Slack error page actually allows users to scroll around the level and click on a variety of objects to play a short animation. Maybe it’s not a substitution for the full game, but clicking on chickens to make them hop around certainly does make me feel better about encountering an error.

You can explore Slack’s recreation of Glitch yourself here.